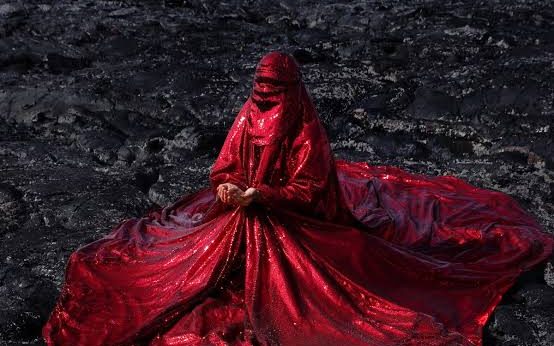 So wrote the Sufi poet Rumi 700 years ago. Curator Nur Shkembi has used Rumi’s evocative words to frame her selection of art by 16 women artists who have cultural backgrounds in Islam as SOUL Fury, an exhibition running at Bendigo Art Gallery until October.

It is a telling title. It slips between the transformative power of these works with a reckoning if not of the soul, at least towards a sense of wonder, and the reality of the experience of artists. They live in a world oft-times “resistant”, as artist Cigdem Aydemir says, to their culture.

The entry to the exhibition is magical: golden circles, made by Shireen Taweel, are perforated with perfectly tuned patterns making arcs of light on the floor. A call to prayer recorded in the Australian outback resonates. Then the room finishes with a poem by Eugenia Flynn, a First Nations (Tiwi Larrakia) Muslim woman, half lit on the wall behind.

The combination does what experiencing art in galleries alone can do: it brings down your heartbeat and raises your spirit at the same time. The clever staging of the whole show reminds us, even subliminally, of the easy slippage between static artworks, video, music, poetry and indeed the space of Islamic sensibility.

Islamic art, put simply, aspires to bring us closer to God. It transcends the trivia of our daily lives, in a process that encourages us to a purer state of mind. You don’t have to be a believer in an Islamic God to understand the power of much of the culture originally from the Middle East, or to appreciate its beauty or be swayed by its rhythms.

Think of Persian miniatures and the Taj Mahal, ghazals spoken and sung as well as the flourishes of calligraphic books, the turquoise and blue tiles of Isfahan and the wondrous spaces of the Haggia Sophia in Istanbul. It’s in the colours floating in the air in the Newport Mosque in Melbourne.

Many of the works in SOUL Fury reflect these traditions. Nusra Latif Qureshi’s precise and luminescent “miniatures” come from that traditional style and technique, but hidden within them is the sting of colonial and present day (often gendered) politics.

Shahzia Sikander’s hypnotic rhythms in her video Singing Suns, of exploding golden orbs, easily transcend our terrestrial humdrum. Bombshell, a video by Cigdem Aydemir, takes its name from the Marilyn Monroe footage of her dress swirling over an air vent. Here equally rhythmically billowing clothing surrounds the figure of an ethereally floating young woman, though her clothing is the heavy veiling frequently seen by those in the West to equate with oppression and restriction.

SOUL Fury is about the culture that flows around this religion, as it is experienced by women today. Gallery director Jessica Bridgfoot says this exhibition is a “disruption of entrenched powers in public cultural spaces”. The placement of this exhibition in Bendigo, with its recent fragile history of Islamic relations around the building of a new mosque is understandable.

However, the success here is that while the visitor arrives aware of the issues, the overall result is to be inspired by the work and its stories. It’s about facing adversity head-on, if not with defiance but with strength, humour, and a refined sensibility of a greater humanity.

The filigree delicacy accorded Mehwish Iqbal’s personal accoutrements of refugees is an example. Another is the serious humour of Hoda Afshar’s unlikely photography: women in heavy veils sporting a blonde pigtail, or smoking a cigarette and very cool sunglasses. In the end people win, artists win, women win.

THE HEIGHT OF THEIR POWERS

Half of the 16 women represented live in Australia, half of those born here. While artists from or living in Bangladesh, Somalia and Cambodia are included as well as those with a Lebanese background, the majority are from the Persian arc of influence: Iran and its cultural partner of Pakistan. Almost all respond to the immensely entrancing traditions of art coming from there, in technique (including miniature painting and intricate carving), style, content — or all three.

The image of women of Pakistan particularly in Western minds is one of subjugation and violence. But the work by many of the Pakistani artists here, including Shahzia Sikander and Nusra Latif Qureshi, comes from institutions in Lahore and more recently in Karachi run by women. Formidable artists-teachers-writers Salima Hashmi and Durriya Kazi have nurtured students there who have since gained enormous international reputations.

Most of the artists are in their 30s and 40s, at the height of their powers and making themselves and their views very clear. These are not artists on the margins of the art world.

Some of them, like Sikander, Qureshi, Hadieh Shafie, Shadi Ghadirian, Naiza Khan and Anida Yoeu Ali, have been included in the major exhibitions and institutions of our time, from the Venice Biennale to the British Museum, to the Queensland Art Gallery’s Asia Pacific Triennial.

Contrary to the stereotype of neglect, these artists are doing very well in the centres of art world power.

This important exhibition is a unique chance to experience webs of sympathetic communication weaving between great works in a specific cultural context. A tour-de-force experience, it really should be seen around the country.

SOUL Fury is showing at Bendigo Art Gallery until 24 October.