Making your workplace a mosh pit for creative ideas

The key to success in scaling your creative company is to demolish the silos and the egos and dive in favour of a creative communal culture.
Gina Fairley
[This is archived content and may not display in the originally intended format.] 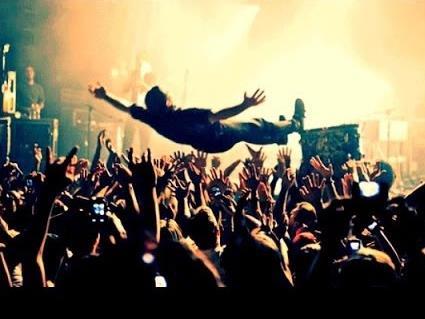 Dive into mosh pit of collaboration and success; wikimages

The first open plan business space was created in 1959, the first co-working space in 1985 and the first accelerator in 2005. That history is not just a description of trends in office architecture.

According to Jon Holloway, Vice President and Managing Director R/GA, the change in the way workplaces are designed speaks of an evolution that is changing the way we work and escalating the possibilities for cultural oganisations and creative businesses.

Holloway is part of a company that is virtualising incubating – that is taking the startup model of a mosh of new ideas and driving it online to connect people and new business globally.

Today, R/GA connects over 3,000 innovators who are scattered globally, and who have a value focus on design and commitment to creating innovative, useful digital solutions and devices. In partnership with Techstars, they are the first agency-based accelerator program.

While that may seem a stratosphere from what we might be doing as artists and cultural producers here in Australia, there is an interesting break-through point in their model that, as a sector, we need to excavate and transplant.

Use proximity as a tool to commercialise

In the past, the buzz has been around co-share offices and applying the open plan break-out model to encourage creative thinking across the work environment. It stems from the tech landscape of Silicon Valley with the micro lab-slash-playgrounds of corporate headquarters, made infamous by Google, Cisco, Facebook, and the like.

The culture sector has been slower to pool and partner. But as our world continues to shrink through technology and as funding becomes tighter and innovation is encourage, proximity as a key tool to entrepreneurship appears to be a way forward.

It was a topic discussed at the recent REMIX Sydney summit: Incubating and scaling ideas: innovation, networks and spaces, chaired by Katrina Sedgwick, Director Australian Centre for Moving Image (ACMI).

Sedgwick is the driving force behind ACMI X – now just two-months old – a model that not only consolidated 80 staff, previously scattered across three floors, but also invited like-minded organisations and 60 co-working spaces to join them in a new building designed as a co-working space.

The State Library of Victoria (SLV) is also experimenting with new ways of structuring space for creative productivity. It has just commenced an $83M capital works program to turn its city block-sized edifice into a more navigable and engaged physical space.

The plan, funded two-thirds by the State government and a third philanthropically, will bring together a cluster of 23 buildings that have organically grafted and grown into a mega-site with a decentralised workforce.

Like ACMI X it has taken its cue from the tech-model of bringing different audiences and different groups together with productive collaborate hotspots.

‘Libraries have always been incubators and accelerators for ideas in the community, it is just that we are delivering that in a different way now,’ said Justine Hine, Director of Library Service and Experiences at SLV.

If an 160-year organistion and a bastion of tradition can embrace de-siloing, then we can all learn from the lesson.

Hine said that SLV was founded as a people’s university at a time when Melbourne didn’t even have sewerage system. ‘It was ahead of its time,’ she added. It’s embracing those roots to embrace the future.

‘What we are looking to do is to evolve the role of what the library provides and to facilitate collaboration in place – it is a big mission piece,’ added Peter McMahon, Director Digital Marketing and Communications, SLV.

He continued: ‘Two of the physical spaces are going to be dedicated to the general idea of innovation – bringing together groups of people who possibly don’t think of themselves as innovators, but they come to the library already to seek innovation and new learning.’

It is about changing the way we think and to use physical space to escalate that change.

We may not all have a budget of $83M but we might be facing a lease renewal or can rethink the use of existing spaces and how they can be scaled up for greater engagement.

‘It’s about how we build on that idea of the people’s university that was founded in 19thc but in a new context, with new technologies and new partnerships and funding models,’ explained Hine of the SLV’s mission.

This ancient institution is every bit a contemporary living workshop – what we might call an incubator for ideas and entrepreneurship – as MakerSpace & Company, a factory of sorts for member-based creative production in the Sydney suburb of Marrickville.

Not yet a year old, this workshop has at its core a shared office space like any techstart (the buzzword for your tech startup), but is pitched to artists and makers with shared ceramic studio, machine shop and wood working studios.

Founder Anna Lise De Lorenzo said: ‘It works like the kind of gym I’d got to where I use the equipment I like and there’s someone there to help you.’

‘We wanted it to be a commercial business and part of reasoning was to do that – to secure investment funding – was to prove that it is possible for creative people to run a business of their own. It felt hypercritical not to be setting example,’ explained De Lorenzo.

These are exactly the kinds of new model work environments that we need to be thinking about to scale our ideas and our future sustainability – whether coming at it from the practical end as with MakerSpace, the administrative tail such as ACMI X, or a free access model as with SLV.

‘We were physically siloed, which is a nightmare for a creative institution,’ Sedgwick said, adding that in searching for new a new space it was a “no brainer” to explore the bigger option and invite genuine partners with the sector into their working space everyday.

‘We can learn from the tech sector and the mechanisms in there that can nurture innovation partnerships that can really expand the impact of the sector we all work in and help support new ideas,’ she added.

‘But to do that, of course, we have to enable proximity; we’ve got to enable investment and allow people to get outside of their own bubble, and we have to explore how we foster entrepreneurial thinking within that bowl.’

Sedgwick reminded that these conversations come at a time when we have a Federal Government and a Prime Minister who, ‘hung their hat on championing new industry model and talking about responsiveness, agility, de-siloing, collaboration and innovation … but the arts and culture sector was very obviously absent from the Federal Government’s innovation policy when it was announced.’

The message is clear. To survive we need to change our models and we need to steer that drive for innovation ourselves and the rewards will follow.

Holloway said the challenge the culture sector faces is an interesting one. ‘Certainly for the tech sector, the entrepreneur sector, the startup sector you come up with an idea, you get seed funding, it goes through and then you either make the business or your don’t, then finally you sell it. The cultural sector doesn’t seem to have that same process in place.

‘The thing I was really obsessed with before physical spaces, before commercial spaces, was getting the ideas out to people. There is no mechanism to take those idea out and into people’s heads and give them support to turn them into something – to commercialise those ideas,’ he stated.

De Lorenzo has proven it can be done.

‘We talk about how everyone wants to tick the tech-box as a startup. There is no policy around; there are no grants to assist what we do. We don’t fit into arts funding because we are too commercial and we don’t fit into business because we are too arty. Our objective is to be self-sustaining and self-funding and so we run short courses and offer membership and access passes.

She continued: ‘We found the people we were approaching for investment were much happier to give us a donation as a tax deductible gift, so we set up a charity under cultural organisations and that is our fundraising vehicle, which then funds our propriety limited company. We receive no government funding.’

She believes that there are a whole lot of value assumption that are really challenging that we, as the arts and culture sector, generate for ourselves. Critical is the way that we project – internally and externally – to investors viability of a return from creative businesses.

The hard work is not exclusively about getting the money. The hard work is about smashing our silos and building in their place platforms for shared resources, partnerships, and organic modes of networking.

We need to embrace the water fountain for our future sustainability as a sector.