An artist walks into a crowded street and screams

Chinese artist Xu Zhen can teach us lessons in individual expression, and tolerance, in our times of coronavirus
Gina Fairley 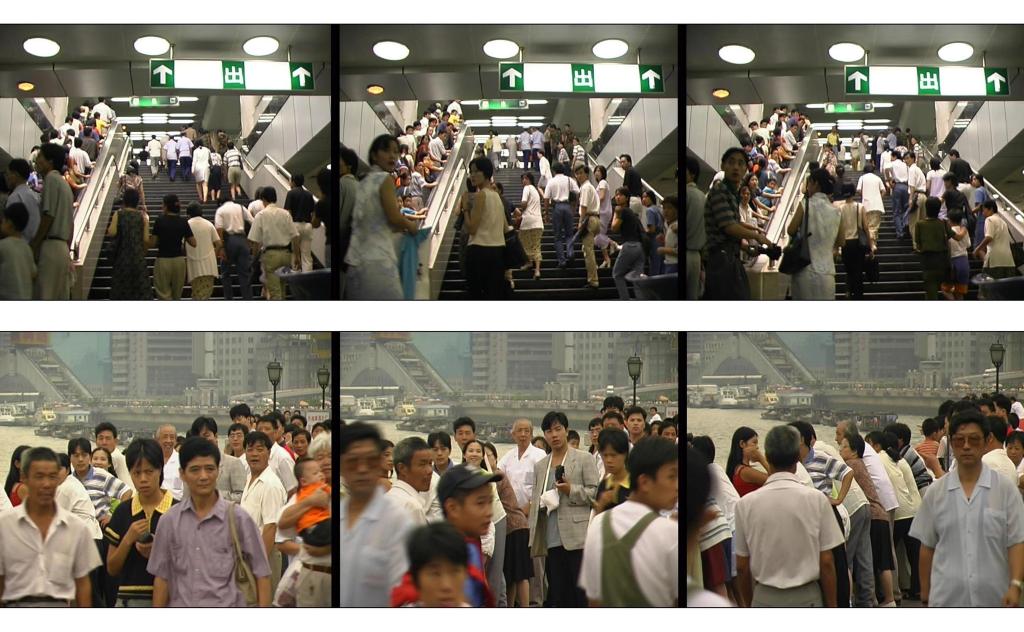 An artist walks into a crowded urban space; his video camera is honed on the crowd. We are witness to the movements of everyday life – commuters in close proximity; the anonymity of a crowd careful not to engage.  And then he screams. People stop in their tracks and stare with a panicked expression, not knowing whether to run.

The video captures a renewed zeitgeist – a society quickly triggered by fear.

Titled Shouting (1998), it is by Chinese artists Xu Zhen, and was exhibited in the first Chinese Pavilion at the 51st Venice Biennale in 2005, and is currently at the National Gallery of Australia as part of the exhibition Eternity Vs Evolution (until 13 September 2020).

It perhaps might have been the least remembered work in this exhibition a couple of weeks back, as more spectacular works of incredible scale tantalised and wowed gallery visitors. But today, it demonstrates the capacity for art to communicate an emotion as we all live in the fear of contagion, as a wave of hysteria has descended with an irrational might.

Perhaps there are lessons to learn from the work of Xu Zhen – lessons in kindness, acceptance and laughter.

ArtsHub spoke with curator of the exhibition Peter Johnson, who caught up with Xu Zhen in Shanghai late last year, before coronavirus locked down China.

He did not travel to Canberra for the opening of his solo exhibition – but then he opts not to fly.

‘His work is really an interrogation of what the role of the artist is in society as an individual – and in a society that priorities either community or conformity,’  he said of Xu Zhen’s video. ‘He asks, how do you assert your individuality?’

While screaming in crowds is not recommended these days, being individual in one’s practice is ever more so, as we face the need for alternate forms of communication.

In the coming week, you will be able to stream Xu Zhen’s video online, as well as walk through the exhibition with Curator Peter Johnson.

One work that isn’t in this exhibition – and in hindsight would have been timely – is the installation ShanghART Supermarket (2007), which recreates a convenience store where the shelves are crammed full of empty products, sold at their ordinarily marked prices but are only the external shells of their packaging.

Xu Zhen has become increasing interested in how globalisation intersects with ideas around the body, alienation, trade, control and the commodification of culture, which saw him establish the MadeIn Company, a factory-like cultural production corporation in 2009, and the associated brand XU ZHEN®.

This is what many artists face at this moment – the need to reinvent their practice and try to find those intersections between art and business.

STARING INTO THE ABYSS

‘Xu Zhen talks about the Nietzsche quote, ‘If you stare into the abyss, the abyss stares back at you,’said Johnson.

This is played out in a new work that came from the artist’s Shanghai studio – the first time it was to be shown outside Australia.  Hello (2018-2019) is a serpentine version of a Corinthian column that, when triggered by a visitor, locks onto them and follows them around the gallery space in a predatory manner – ready to strike at any moment.

This work is reliant on contact, and yet its message still has a currency as we rethink how we visualise – and try to make sense of our world.

Johnson explained: ‘He is interested in the Corinthian column as a cultural form in the West – on our buildings of power, our banks, our court rooms, our government buildings – but he talks about in China where the column  –  counterfeit versions of it  –  used on karaoke halls and bath houses, so there is a real difference in the way those meanings are played out,’ said Johnson.

‘He was really interested in what stereotypes and preconceptions different parts of world have about each other, especially the West about other parts of the world,’ he continued.

‘He is agnostic in the way he employs cultural forms from the West, East, Middle East, Africa  –  is interested in seeing what happens when you mix them up, and when they do clash, whether they create new forms,’ continued Johnson.

At the end of the day, it is a message of tolerance, openness and acceptance. It is also about shifting the lens we use, and to push against the fear to do something different.

While the gallery is currently in a temporary closure, XU ZHEN® will remain on display at the National Gallery of Australia until 13 September 2020. The exhibition has been presented in partnership with White Rabbit Gallery.