20×20: Creative ageing is an urgent and fashionable topic, yet currently unsustainable

We revisit the topic of Creative Ageing – its challenges and changes – for the International Day of Elder Persons, and as part of our 20x20 series celebrating 20 years of ArtsHub.
Gina Fairley 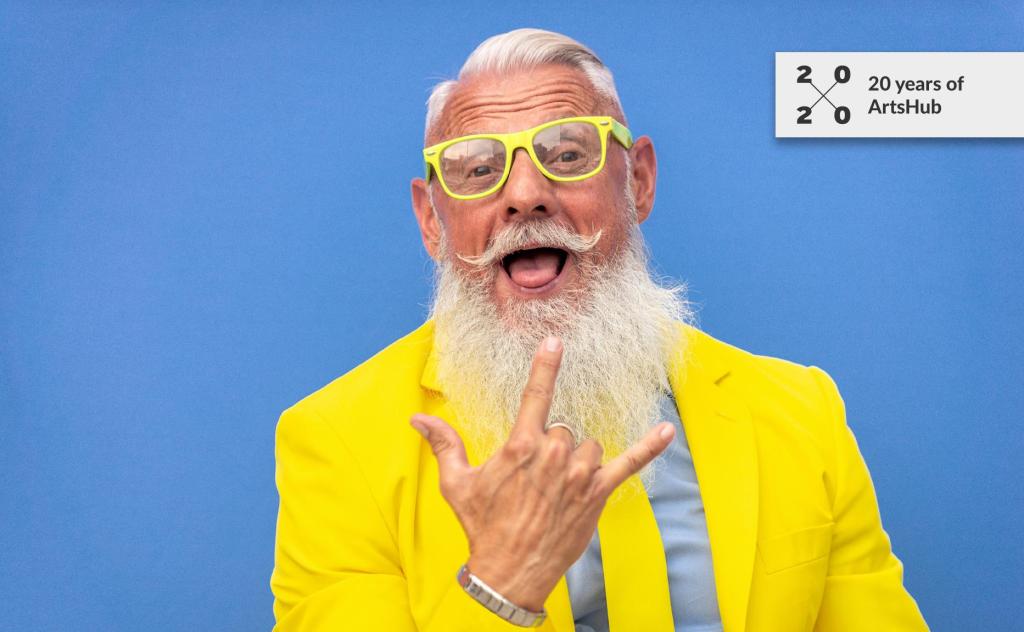 Creative ageing is a two-fold problem: the crisis of our artists ageing into poverty, and the lack of sustainability in training and programs as a broader public ages creatively. To coincide with the International Day of Elder Persons this week, we revisit this article published in October 2018, when a panel discussion encouraged Australian artists and arts organisations to rethink our perspectives on and language around mature audiences.

The latest article in our 20×20 series, celebrating 20 years of ArtsHub, the topic is more important than ever as our population, and sector, ages.

Formerly a policy strategist with Create NSW and CEO of Milk Crate Theatre in Sydney – which runs the only training course in the country for late career artists – Bowtell chaired a SAMAG panel on Creative Ageing back in 2018.

She makes the point that while we have a very clear understanding of the steps of aging from birth to 21 years – from toddler, to teen, to early career – we have little grasp of the nuances of ageing across a similar, 20 year period from 50 to 70 years old.

It is part of the endemic problem of ageism today, despite the fact that our population is an aging one.

Joanna Maxwell, Director of the Age Discrimination Team at Australian Human Rights Commission, and author of Rethinking Your Career In Your 40s, 50s and 60s (2017) – a period that she describes as the ‘third stage of our careers’ – noted that ‘we used to think of retirement then, but now we are working longer.’

Maxwell started her own business in her 40s, and said that many of the people she interviewed for her book were taking an ‘adult gap year’.

She continued: ‘We are now at a stage where people in their 50s and 60s are on a journey without maps; charting new territory. We are living 30 years longer than people did on average 100 years ago … [and] research tells us that we have become more individual as we age, not more similar. Yet in papers, in government policy, and in all those ads for funeral plans, its assumed that people over 50 are all the same. What that says is that we have to get braver about creativity.’

Maxwell added that research shows that being creative adds 7.5 years to your lifespan, so it’s a no-brainer that we throw some innovative thinking, policy, program and solid cash around creative ageing.

While all those ideas and statistics are good and well, creative ageing and the ageing of creatives – professional artists and designers – are seemingly addressed in different ways.

Why Australia is lagging behind in creative ageing

Bowtell describes creative ageing as two-fold: amplifying the greatest creative potential of older people, and disrupting ageing’s stereotypes through the arts. The third, less visible aspect in the wider conversation, is artists ageing into poverty.

Bowtell reported that research by the Australia Council for the Arts has showed that older Australians have one of the lower participation rate in the arts at just 39%, against the national average of 48%.

In contrast, Ageing UK have identified cultural and creative activity as one of the most useful and valuable contributions to wellbeing when over 70. So what are the barriers, then, standing in front of older people participating in the arts in Australia, either at a professional or non-professional level?

‘The one big issue that we haven’t grappled with successfully yet, is developing training for professional artists in the creative ageing sector. I have seen so many programs over the years where people have an unrealistic expectation of change by [just] having a volunteer playing a piano in a retirement home, or a photographer instructing a class, for example.

‘Most of these artists are employed because they are good artists – that they are going to be effective in engaging participation by older people – but there has to be that level of training for that to occur,’ said Meagher.

One organisation is getting that training right is Milk Crate Theatre in Sydney. It offers two programs  – Headway Program and Pathways Program for emerging artists – which allow people to participate creatively without the barriers of age or income.

Bowtell said: ‘Our data shows that 45% of participation in our programs are by people over 55, with the average 53, the majority are on Centrelink benefits, and the majority are men. We are bucking the trend.’

Georgina Wood, a participant of the Milk Crate Theatre program, added: ‘I studied  drama part time at Uni, but have learnt so much more with Milk Crate in comparison to that academic learning – its learning on the boards.’

These are real opportunities for artists – and emerging artists – not hobbyists.

Bowtell continued: ‘We offer our workshops in community centres; we go to where older people access other services – health, legal, food services – we provide a variety of art forms and we provide actor support – so all of what we are doing is creating an environment where people feel safe to participate.’

The problem of sustainable creative ageing

Nadia Wheatley, a professional author, spoke from the floor of the SAMAG discussion. Wheatley is on the Council of the Australia Society of Authors and has been a full-time professional writer since 1975.

‘I have not had another job with a boss putting money into a super fund. My husband is a full time painter. And what we face is that terrifying age without money. We want to keep working until we die … and yet it is increasingly hard in both of our industries to do so. I believe there is discrimination against older people in our industries,’ shared Wheatley.

She asked the very urgent question: How is our society treating its elder artists?

Wheatley said that it is difficult for artists to get the old age pension as you can’t just show your job has ended. ‘Increasingly too, the grant money is going to emerging artist – when I was young I slept on the floor and ate lentils I didn’t need it, but now that I am old, I need it.

‘And when I did get an Australia Council Grant I was kicked off the pension for two years, and that made it so hard to get back on it. We need this conversation on creative ageing to include people for whom this is a job, not a hobby,’ she said.

A spokesperson in the audience from the Australia Council said that this was something that the government peak body was really aware of – the idea of how to support artists as they age, adding that artists ageing into poverty is a concern in research around the world.

Read: Why we should celebrate the aging body in dance – Richard Watts (2019)

Danielle Gullotta, Access Programs Producer at the Art Gallery of NSW was also in the audience and offered the general comment about the sector: ‘The other thinking around creative ageing that I want to impress is sustainability – it’s tough out there to develop programs and get them funded, then to have that training program in place and to pay artists. Sustainability just seems to defeat us time and time again because people have a great idea and program is up for 12-months but there’s just not enough foresight to prepare for its sustainability.’

She added that we need to think about triennial funding when developing creative ageing programs, so that people have a chance to develop corporate partnerships to ensure that sustainability.

‘We are so often reliant on government funding but there are so many opportunities for corporate and philanthropic support as long as you are well aligned,’ said Gullotta. She mentioned that the success of Milk Crate Theatre comes down to a great partnership with Mirvac, which has allowed them to finance that authentic training.

Wheatley made the further point that ageing is impacted upon by industry change as well. ‘It is when systemic changes happen at the same time as a growing population of older artists – for example publishers have decided it is cheaper not to have warehouse titles, so I not longer make money of my backlist.’ She also mentioned that the gallery her husband exhibited with was closing. ‘What gallerist wants to take on an artist in their 60s?’

While the SAMAG panel discussion did not offer any solutions for these looming and urgent concerns around creative ageing, it did however offer the space for much needed conversation around this topic – a conversation that needs to be picked up and prioritised across peak arts bodies across Australia.