Why it’s never too late to start your arts career

Considering starting late? Artshub joined other panelists in a discussion about possible pathways and tips on starting your arts career later in life.
Gina Fairley
[This is archived content and may not display in the originally intended format.] 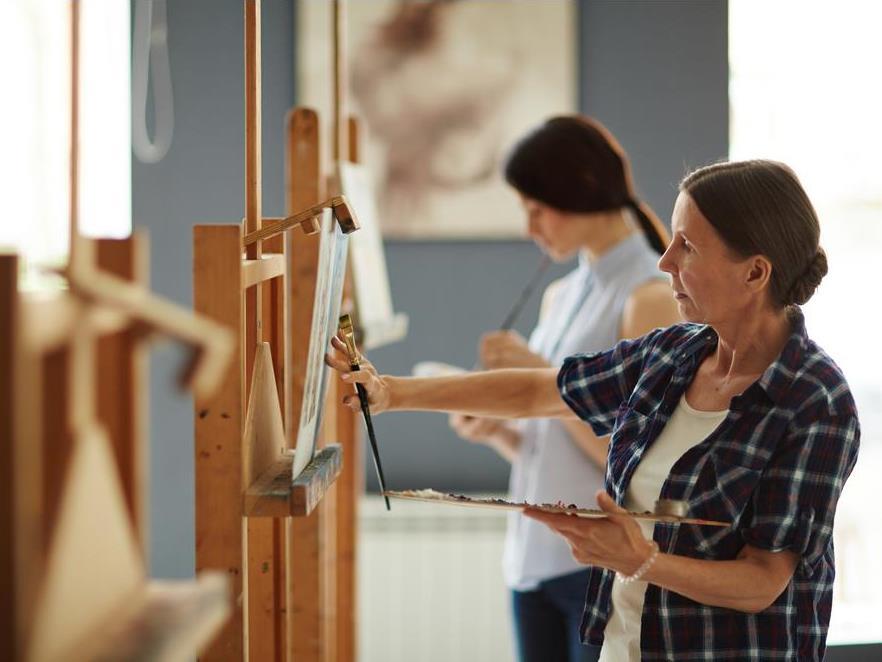 Whether starting a career as an arts professional, or picking up a creative practice later in life, the rules are the same as those applied to any school leaver. You need to be clear what that career might look like, you need to be focused and driven to get there, and you have to have the confidence to back yourself.

For a long time, the arts has been skewed towards the notion that young equals a good bet. The term “emerging” was rigidly fixed to an under 35-year old age bracket. Today, industry standards recognise emerging as creatives in the first five years of their professional practice. Age has been removed. But has it really? And are artists still disadvantaged when starting their career later in life?

ArtsHub had the opportunity to flesh out these ideas in a panel discussion at the recent edition of The Other Art Fair (TOAF), held in Sydney. The fair is a unique model in that it is artist driven. That is, artists without gallery representation present their work to the public and collectors. Age is irrelevant.

This kind of self-driven professional practice characterises the climate of opportunity for artists working today – an environment where funding has been dramatically reduced and yet activity and demand for creativity has increased. The other looming factor is that our population is ageing, and with that our perception of age is also changing. The 50s are the new 40s.

While in most professions people considering retiring at 65, those who are artists and creatives may not start their careers until their 50s, and then they might work well into their 80s and 90s; artists are not put out to pasture.

The poster-girl of the late-comer would have to be the artist Rosalie Gascoigne.  She began exhibiting in 1974 at the age of 57. Just four years later, she was given a major survey exhibition by the National Gallery of Victoria, and in 1982 was the first female artist to represent Australia at the Venice Biennale. She was 65 at the time.

Gascoigne would never have been part of the under 35 ’emerging category’, and yet she is considered one of Australia’s great artists. This serves as a good reminder when one is feeling deflated by age and career ambitions.

Steven Alderton, Director and CEO of the National Art School in Sydney, confirmed that in their Bachelor of Art degree the ratio is 60/40, school leavers to mature age students, which escalates to 50/50 with their Masters of Art program.

It is a very different landscape to that of the ’90s when there was a great focus on the young. For example the prestigious Moet and Chandon Prize was only open to artists aged between 20 and 35. In the UK, the newly graduated YBAs – or Young British Artists – set the tone for the global art market and curatorial tastes for a decade to come. And in 2009, the New Museum in New York presented the exhibition Younger Than Jesus, using his age point of 33 as the cut off for creative miracles.

Nearly a decade has passed since that exhibition. During that time I would venture that the diversity of conversations across the arts has broadened. Today, we openly advocate around topics of mental health, sexual harassment, arts and disabilities, gender equality and ageism. We may not always get it right but these conversation were few and far between ten years ago.

Tamara Winikoff, former executive director of the National Association for the Visual Arts, said: ‘What I think has been going on is this cycle of fads and fashions in who gets the attention.

‘Certainly in past years the young have been assisted, but I think it is a kind of guilt story where we discover there are disadvantaged groups that don’t get attention, which is followed by affirmative action. What is worrying is that these fads come and go. It happens sequentially, rather than simultaneously,’ Winikoff said.

The message is that while we need to advocate for inclusion, we also need to get on with it ourselves.

Getting on the right path

Winikoff said that if you are starting a career as an artist, regardless of your age, you have to ask some pretty serious questions of yourself.

‘What do I want out of this? Do I want to be selling work? Do I want to be seen? Where do you position yourself? How do you identify yourself? Are you courageous enough, bold enough, silly enough to say: “I am an artist,” when you fill out your Census form or go through customs at the airport?’ she asked.

Chair of the panel, curator Sebastian Goldspink added that you also need to ask what your perception of success is.

‘Is it putting your work on walls here at an art fair? Is it being a community artist, or supporting mental health by working as an artist in a hospital or perhaps you want to be an activist artist? They are all different things and the measure of success is different for each.’

Winikoff reminded us that being an artist is not just about articulating your ideas in the studio, but getting them out into the ether and having others engage with them.

If you’re seeking gallery representation, Alderton reminded us that an art dealer won’t chase you down.

‘I have heard from so many dealers that they told an artist they liked their work and they [the artist] never got back to them. There is no room for being shy today if you want to be a professional artist,’ Alderton said. ‘You have to back yourself and put yourself out there.’

When people – including dealers – come to the NAS graduate show, they are not looking for the next young artist; they are looking for next the emerging artist, said Alderton.

Looking beyond the career clichés

Often when an artist is trying to advance their career in the early stages, they turn to the default position and go to the commercial gallery in the hope of representation.

Thinking outside the box is the most valuable resource we have, moving forward in our times. There are over 130 galleries in Sydney alone, and we tend to focus on the big ten. Artists need to do their homework and start to broaden their horizons.

Winikoff continued: ‘Alongside the commercial trajectory there is the public trajectory – artist run initiatives, independent contemporary spaces, biennales, for example, where it is more about an ambition to create a public conversation. Residencies are also a fantastic way to get overseas and interstate and network and collaborate with others.’

Art prizes are another avenue where you can build your professional profile; there are hundreds of them in Australia and most are without an age limit or an imposed career position. The advantage of applying for such a prize is that your work is being put in front of a panel of curators or someone within the echelons of the art world, and they are forced to look at and consider it.

The more you apply for these things, the more confidence you gain, and it also helps build your understanding of what professional practice is – how you present yourself and your work.

The Other Art Fair is also a fantastic way to invest in yourself, and while it’s not everyone’s cup of tea to stand at a booth for four days and sell your work to strangers, it is a phenomenal way to build visibility, networks and sales.

The term “professionalism” is bandied around loosely these days. There is a considerable difference between someone who makes art for enjoyment, and someone who is driven, has ambition and commit the time to developing a professional career as an artist.

If it is the latter you are pursuing then take these six tips on board:

You have to be willing to commit the time to your practice. Like any other profession, you have to understand your working week and what you need to accomplish in that week.  Don’t go into this with rose-coloured glasses. Any career path is tough, and being an artist perhaps more so. Time is not only time in the studio making, but time going to shows and reading.

2. Be willing to compromise

As the saying goes, “You can’t have your cake and eat it too”. With any career choice comes compromise – and starting later in life when you have had the security of another profession or family, being willing to make compromises is one of the hardest things to face.

The art world is a tough one, and you need to be sure of who you are, what you do and what you want. Write it down if you want. There is nothing worse asking an artist what they do and you are faced with a dance of ums and ahs. Work on your 5-minute elevator pitch and always stay connected to the work.

Social media has been a fantastic boon for artists who sit outside of gallery representation, and age is not a meter for opinion.  It is a great way for an emerging artist to create visibility at no cost. So get on Instagram and get a website – but before you do, do your research first and think of the image that you want to create. Remember your professional profile should in many ways take the “social” out of social media – keep the tone and brand in line with your ambitions.

One of the greatest tools you can arm yourself with is context. See as many exhibitions and shows as you can, because it is vital to understand where you and your work might fit within this bigger picture. Also read – subscribe to Artsy, Artnet News, ArtsHub and be on top of the trends, news and policy across your sector. Would a lawyer go to court without understanding a case? Would a doctor operate without knowledge?

Until you have a sense of where you fit, you are not going to know where to turn next along that career path. You will always just tread water.

If this is something you really want then you have to drive it yourself  – don’t sit back and wait for artist representation or sales or media to come to you. You are only limited by yourself.

Goldspink concluded: ‘I don’t know any successful artist that is lazy – they are all driven and slightly obsessive.’