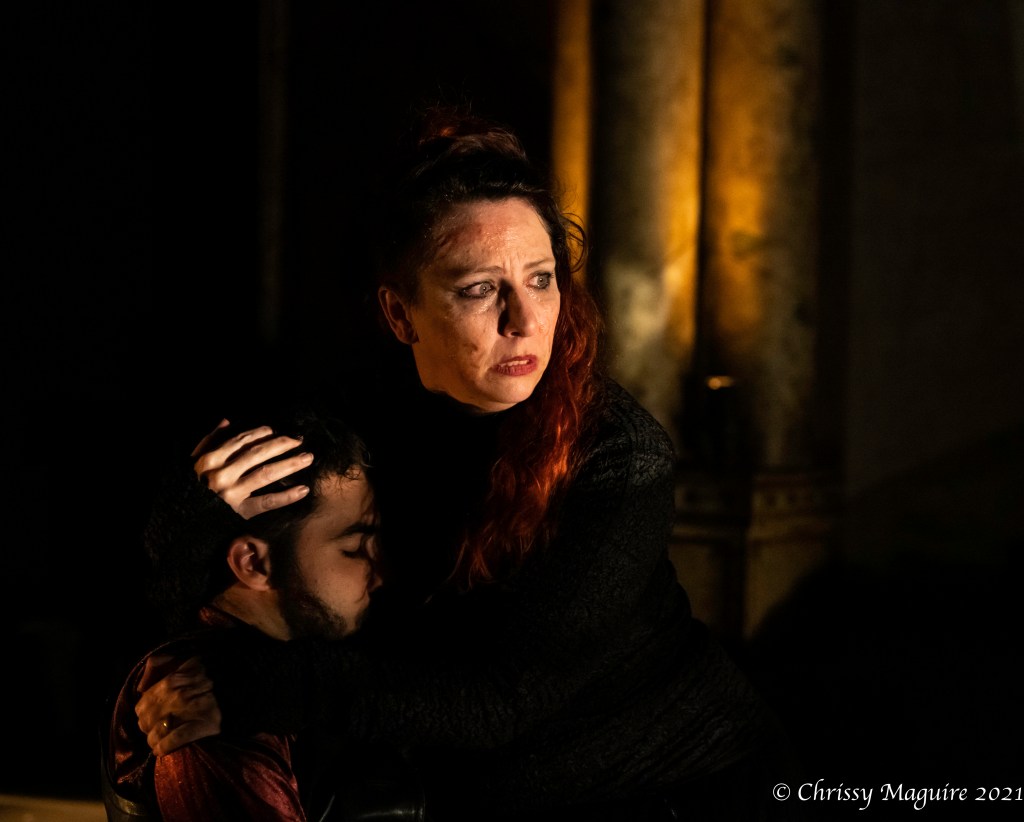 Terri Brabon embodies Margaret of Anjou with command, attack and ferocity in Blood Will be Blood. Picture by Chrissy Maguire.

For the past ten years or so I have been fortunate enough to experience – and continually review – the sterling work and developments of Townsville’s TheatreiNQ.

Quite frankly, this company has developed a model for regionally-based professional theatre work that excels in its work, training and education. Its latest production is no exception, though Blood Will Have Blood opened in the wake of devastating news from Arts Queensland that 14 new companies had received organisational funding and not a single one from regional Queensland.

Artistic director Terri Brabon has continually produced extraordinary work with comparatively little, and so it becomes inevitably a testament to this plucky company’s survival that despite all odds, it  continues. And this is not only because of her and her dedicated company’s tenacity, but also attests to the devotion of her passionate ensemble and fiercely loyal audience.

True to the TheatreiNQ ethic, it is the power of the company ensemble that shines in this  production, the third and final adaptation of Shakespeare’s plays about the Wars of the Roses. Originally scheduled to be performed over the space of a year to coincide with the company’s 10th anniversary, the trilogy began with The Blood of Kings in February 2020 just prior to the outbreak of  COVID, and wove Richard II, Henry IV (Pts I & II) and part of Henry V – into a compelling, epic performance at once formidable and spellbinding.

The second and third parts were postponed due to COVID, with the second part – The White Rose and the Red – premiering in July 2021. For that Brabon faced the challenge of looking at two of Shakespeare’s least performed (and arguably his worst) plays, Henry VI Parts I and II, and adapted them magnificently into one production.

This is the final part of the ambitious trilogy that saw Henry IV Pt III and Richard III adapted into two acts for a marathon production at once compelling and magnificent despite its three-hour performance time.

This production is the pinnacle of Brabon’s 17-year desire to adapt these plays into a performable trilogy, and this adaptation deals further with the Houses of Lancaster and York as they jockey for power and the ultimate prize – the English crown. During the course of this play, we see the crown  pass from Henry VI, Edward IV, Edward V and to Richard III (the last of the Plantagenet kings), and  finally to Henry Tudor who will ultimately become Henry VII and first Tudor king.

Brabon’s eye for the majestic grand sweep of the narrative is impeccable, embodied by the evocative set with an enormous arch enclosing a medieval icon of a Christ-figure and a set of Gothic arche sthat had seen better days. This was set in relief against the enormous (and lit) outline of a rain tree, no doubt giving us an indication not only of the enormity and significance of the events  that would take place before us, but also of the comparative insignificance of the individual.

Brabon always manages to create a unique world in her Shakespearean works, most particularly in the tragedies. I found the 1980s inspiration intriguing, but initial doubts were soon quelled as the action progressed. Stylish though heterogeneous costuming (also a  hallmark of Brabon’s productions) saw the House of York initially resemble an itinerant ‘bikie’ gang, headed up by a sinister Richard III in black combat fatigues, denim jacket and combat boots. She  complemented this ‘look’ with an array of eclectic haircuts, flawless fight choreography and an (at times jarring) soundtrack of grinding metal music and covers of famous songs.

A motif that has been common to all three parts of the trilogy has been her use of the seraphim. Looking for all the world like the Dementors left over from a Harry Potter book, these sinister, faceless cloaked creatures of indeterminate gender prefaced any death with their ominous  presence and their exits saw the unfortunate victim escorted unceremoniously into a doubtful next world.

As one has come to expect from a TheatreiNQ production, it is the strength of the ensemble cast  that takes us on this journey. Despite the fact that the running time is around three hours, there is never a single moment when the stage action is either dull or not demanding our attention, and in this the 29-strong ensemble cast must take full credit. There is not a single weak link either in the production values, acting or direction of the piece.

It was an expressed intention of Brabon’s to look at the female roles in the plays she adapted,  particularly Queen Margaret (or Margaret of Anjou) who appears in Henry VI, Part 1, Part 2, Part  3 and Richard III. Brabon herself takes on the role in this, with an interpretation embodied with command, attack and ferocity that brings truth to the historical perspectives of this extraordinary woman who was one of the principal figures in the Wars of the Roses, and who at times personally led the House of Lancaster.

Brendan O’Connor first played the title role in Richard III in 2010, and this time his portrayal of this evil, corrupt, sadistic and manipulative of all villains – ‘the lump of foul deformity’ – was  magnetically hypnotic. While playing down his physical deformities, he still managed to convey a sense of this man who (at age 32) was the last English king to die in battle. O’Connor grasped the complexities of the role with aplomb and managed the complex and changeable relationship with the audience with ease.

In the relatively small role of Henry Tudor, who defeats Richard III at the Battle of Bosworth Field and becomes Henry VII, James Thomasson displayed his progression and development as an actor with an indelible physical and stage presence combined with impressive vocal work.

It is impossible to single out every performer, but other performances of note included Lachlan Stevenson as the Duke of Buckingham, Emma Lamberton as Lady Anne, Sally McCutcheon as Elizabeth Woodville, Robert Street as Edward IV and Michael Sams as the Duke of Clarence.

Never in my 40-odd years’ association with theatres and theatre companies in three countries have I  come across a company that inspires such love and loyalty in both its ensemble players and the audience that devotedly fills the seats at every performance. Townsville is fortunate to have such a stimulating and motivating theatre company, but it would seem that decision-makers at State level find it very difficult to understand that a company of such outstanding standard can exist in a regional area.

Location is neither a compromise for quality or originality – and indeed Dancenorth has proved this with its new status as a major company (the only regionally-based major in Queensland). It took them well nigh on 35 years to achieve that – hopefully it will not be the same for TheatreiNQ.

After all, the state of the arts is a barometer of the wellbeing of a society in which it lives and – whether our esteemed leaders choose to believe it or not – there is a proven direct correlation to  the mental wellbeing of our community and the arts. After all, where do we turn in time of need or  to feel better about ourselves?