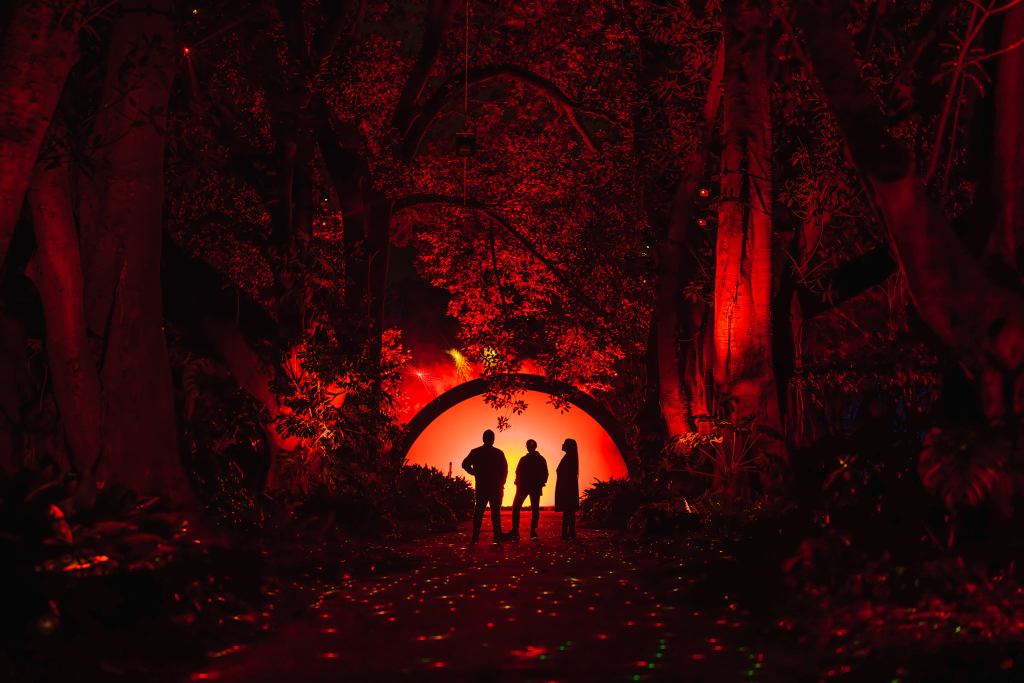 Light Cycles as part of Illuminate Adelaide at the Botanic Garden. Image supplied.

South Australia joined Melbourne and Sydney in lockdown as of Tuesday (20 July), forcing arts festivals and organisations to adapt their programming as Australia faces an ongoing wave of the highly infectious Delta variant of COVID-19.

ILLUMINATE ON HOLD IN SA

The escalated restrictions mean that the inaugural Illuminate Adelaide has been paused from Monday (19 July) until 27 July inclusive, with future programs subject to SA Health directives.

Light installations across Adelaide’s CBD that opened over the weekend have been lucky to dodge the lockdown, including City Lights, Moment Factory’s Light Cycles and Light Creatures at the Adelaide Zoo. ArtsHub reviewed Light Cycles on its opening night.

Illuminate Adelaide Co-Founders and Creative Directors Lee Cumberlidge and Rachael Azzopardi said: ‘We had a wonderful opening weekend of Illuminate Adelaide and were overwhelmed by the fantastic response and attendance at our events.

‘While we are disappointed, the safety of all South Australians is paramount.

‘We remain optimistic that we can shine the lights on Adelaide again,’ the pair said in a statement

Illuminate Adelaide was scheduled to run until 1 August, with a major one-night only event, Music & Art After Dark (MAAD) which featured local and international artists, wrapping up the festival on 31 July.

In related news, State Theatre Company South Australia has made the difficult decision to cancel performances of The 7 Stages of Grieving from Wednesday 28 to Saturday 31 July.

Ticket holders for cancelled performances will be issued a full refund through BASS.

Executive Director Julian Hobba said a further announcement on the future of the season, scheduled until 7 August at Space Theatre, would be made in response to further SA Government updates over the next week.

‘It’s a difficult time for our industry and we feel for all of our local and interstate colleagues who are also affected by the current shutdown. This is especially true for the artists involved in The 7 Stages of Grieving, whose season is now being affected for a second time as a result of COVID-19,’ Hobba said.

Similarly, Brink Productions has announced that remaining performances of The Bridge of San Luis Rey have been cancelled. BASS will be in touch with ticket holders for the cancelled performances.

‘Take care everyone,’ Brink said in a statement.

AFCM CANCELLED BUT THE SHOW GOES ON

The Australian Festival of Chamber Music (AFCM) faces disappointment ahead of its 30th anniversary edition which was scheduled to commence this Friday (23 July) in Townsville.

While North Queensland is free of restrictions, COVID-related lockdowns in Sydney and Melbourne have meant that travel is impossible for many of the festival’s performers and audience members. Consequently, the majority of the festival program has been cancelled.

All hopes have been placed on the festival’s 2022 iteration under newly appointed Artistic Director Jack Liebeck.

Luckily, AFCM’s Winterschool program is able to proceed in Townsville, thanks to visiting musicians arriving early.

Three ensembles will travel from Brisbane for the developmental program, including the Amiti String Quartet, the Delma Winds quintet, and the Onondaga-Gibson Duo.

ACFM Chair Sandra Yates added: ‘We sincerely thank every artist who had so joyfully signed on to perform this year … Our music will play on – we will see you all in 2022!’

Sydney’s Winter Jazz Fest has also had to postpone its current programming. All July events have been cancelled with schedules still in place for August at the time of writing.

Festival Director Amy Curl said ‘Thanks to the support of the City of Sydney and Create NSW, the Winter Jazz Fest was not only an opportunity to bring audiences and business back into the city, but also important employment opportunities for Sydney’s creative and hospitality sectors.

‘If Covid restrictions are lifted at the end of July, it’s hoped that a number of August events will proceed as scheduled, with the possibility that some cancelled July events can also find new dates,’ she said.