A catalyst for the Aboriginal art market, Papunya Tula turns 50

Christopher Hodges was one of the first Australian art dealers to represent and champion contemporary Aboriginal artists. Here, he reflects on a seminal moment in First Nations art history and a new exhibition he has curated to celebrate the landmark event.
Gina Fairley 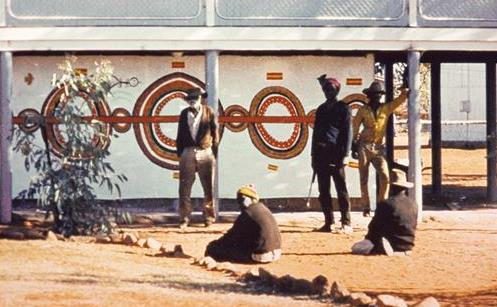 The name Geoffrey Bardon has become synonymous with the narrative around ‘dot painting’, and the Central Desert painting tradition of Papunya.

A school teacher, Bardon is credited with introducing ‘Western style’ art materials to a community of men in the remote area outside Alice Springs, to use for capturing narratives that were usually drawn in the sand or in ceremony.

There is no denying that what might have been a casual gesture by Bardon in 1971 was a catalyst for the contemporary Aboriginal art market that we know today. Although Bardon was gone from Papunya in less than two years, Papunya Tula prospered.

Christopher Hodges, Founder of Utopia Art Gallery and an early champion of contemporary Aboriginal art, is the curator of the exhibition Papunya Tula: 50 years – which opens at S.H. Ervin Gallery this weekend. He describes the anniversary show as the most important exhibition in Australia this year.

‘Papunya Tula is a national treasure, and the way that company has survived and worked for 50 years, and has managed to take the Australian community with it, is an incredible story of community,’ Hodges told ArtsHub.

‘The resilience of this community, to really be focused on the artists since the beginning and to survive for so long, [demonstrates] there is great respect for the elders, and the elders in encouraging the men to open to the women to be part of the group.’

What makes 1971 so significant as a marker in the establishment of the Aboriginal art movement is that Papunya Tula Artists was the first Aboriginal-owned collective dedicated to the production of works for a commercial market – establishing a new model for the many art centres that were to follow.

Also unique, Hodges said, was that ‘right from the outset the artists have been treated as individual painters with individual styles … They work side by side in the same studio – and while they share so much heritage and culture, the great strength of the organisation is that it has allowed, and encouraged, individual voices.’

Hodges has worked with Papunya Tula since 1988, when he was invited by Daphne Williams at Papunya to ‘look after our artists too’, having witnessed his work with the Utopia community.

‘It wasn’t something I set out to do. It has become of a vocation, rather than a job, and your responsibilities are explained to you regularly,’ said Hodge.

This long association allowed unparalleled access to private collections across Australia for the Papunya Tula: 50 years exhibition, pulled together at a time when institutional loans have been difficult thanks to the pandemic.

Hodges said: ‘If you think back to ’88, how many Aboriginal people did you know? And now you can’t imagine a world without a celebration of Indigenous people and their art, and where they are not known or taken seriously by the greater portion of Australians.’

Hodges also described what transpired at Papunya Tula as a ‘social revolution’. He continued: ‘Their impact guarantees that the way we look at our art, and our country has fundamentally shifted … Papunya Tula’s artists brought the land to life and added a new dimension to the tradition of Australian art.’

‘Papunya Tula’s artists brought the land to life and added a new dimension to the tradition of Australian art.’

It was only a couple years after Barden’s initial interaction with the Papunya community that the Whitlam Government created the Aboriginal Arts Board (1974).

Papunya Tula’s success led to the development of remote art centres around Australia, the opportunity for Indigenous men and women to make art springing from their own traditions, and it facilitated the emergence of Indigenous artists across Australia.

‘Instead of party politics, the artists have always believed painting speaks for them … the greatest political act over time is that these works have gone on to the walls of ordinary homes, and people have encountered Aboriginal Australia,’ Hodges continued.

‘And of course, landscape painting with the Wynne Prize [presented by the Art Gallery of NSW], Indigenous artists started to chip away at that, and now they are challenging non-Indigenous artists by their powerful works.’

FROM PRIZES TO ETHICAL COLLECTING TO INTERNATIONAL SUCCESS

Hodges said that one of the greatest challenges of recent time has been overcoming collecting prejudice. ‘This Indigenous art was thought to be too Indigenous, and to others not Indigenous enough; I think it is still the greatest problem people face.’

Time brings change and new ways of looking at things, something we have seen a lot of it over the last 50 years. One such change has been international recognition.

The economic boom of the 1990s boosted the Aboriginal art market in general, with auction houses like Sotheby’s establishing a secondary market for Indigenous works internationally – especially for the early boards of Papunya Tula Artists.

Hodges paid particular tribute to the work of Seattle Art Museum and Kluge-Ruhe, both in the US. The collection of Cornell University’s Johnson Museum also holds some incredible early Papunya paintings amassed by Americans John and Barbara Wilkerson.

Hodges believes that the capacity for international art sales is moving upward. ‘On the commercial front, Aboriginal art sales are creeping up and getting international attention – Emily Kngwarreye  will end up being Australia’s top selling artist if it continues the way it is going,’ said Hodges.

With regard to the recent work the Indigenous Art Code and Arts Law have done against the proliferation of fake ‘dot art’ and souvenirs, Hodges said that artists of every persuasion, from Arthur Boyd to Brett Whiteley, have fallen prey to unethical practice and copyright issues.

‘When you have destructive people to tear down one enterprise to build their own, they fail to add anything to the value of art,’ said Hodges. ‘But then there is also the good story – all the work in this show has been gathered from private collections.

‘The great strength of Papunya Tula is that it has fostered a situation where the artists do their own work in their own time – just like any other artist I work with … there is great integrity in that with Papunya Tula,’ added Hodges. 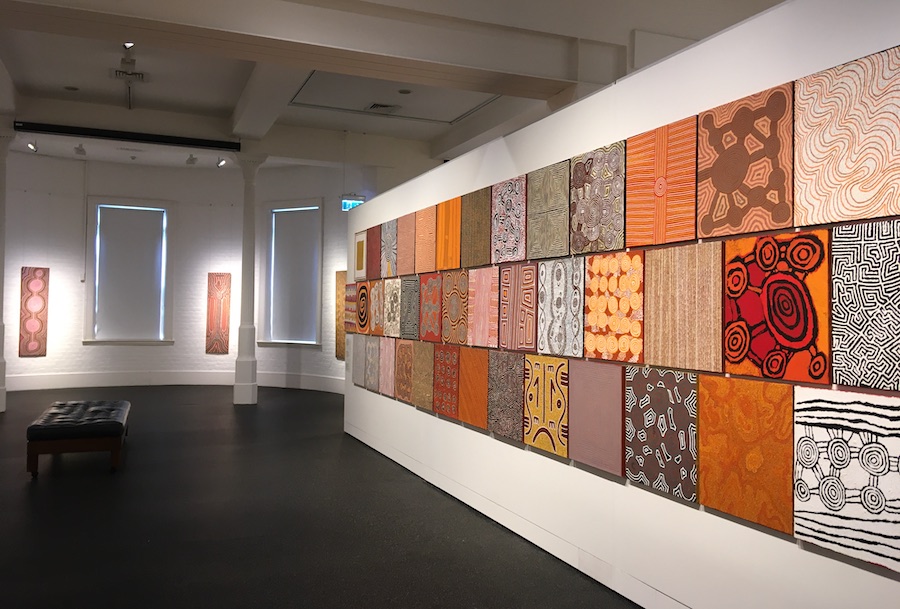 It should be noted that this is not the first exhibition to look at Papunya Tula. A great wave of retrospective exhibitions and publications began to swell in the 90s, among them Twenty-five years and beyond : Papunya Tula painting at the Flinders University Art Museum in Adelaide (1999);  Papunya Tula: Genesis and Genius at the Art Gallery of New South Wales (2000), and the National Museum of Australia’s Papunya Painting: out of the desert in 2007.

Put simply, Hodges said this new show is as much about community as it is about Aboriginal art. ‘It’s a unique collection of over 80 artists that reveals breadth of talent and participation. It shows an art movement shifting across generations, familial connections, and history. It includes many masterworks, by the many artists that painting by painting, built the movement.’

The works on show date right back to 1971, with the latest work only sent from the community in recent weeks. They are grouped roughly chronologically, entering with the early works, then moving to a middle section of 80 small painting made by 80 artists that capture the sense of community, and finally through to the master works – the big scale paintings of the leaders that have shaped Papunya Tula.

‘It is a tight show; there’s not too much room for error,’ Hodges told ArtsHub.

‘Many of this exhibition’s paintings are now irreplaceable because most of the original artists are no longer with us, or are retired. A new generation has stepped forward and their works, from across decades, are also becoming iconic. The latest works in the S.H. Ervin show, made in 2021, demonstrate both today’s vitality and also the links to the past.’

Hodges was mindful to add that while this exhibition focuses on the anniversary of Papunya Tula – and the Papunya Tula Company – there are other groups within the community such as Warumpi Papunya and Tjupi Papunya.

‘They all come out of Papunya Tula artists, and that legacy,’ he said.