The return of Moon Mania, but are we asking the right questions?

Why Australia's space race is caught in nostalgia, when we should be asking if it’s responsible to glorify space advancement at the cost of society, and how artists are shifting that conversation.
Gina Fairley
[This is archived content and may not display in the originally intended format.] 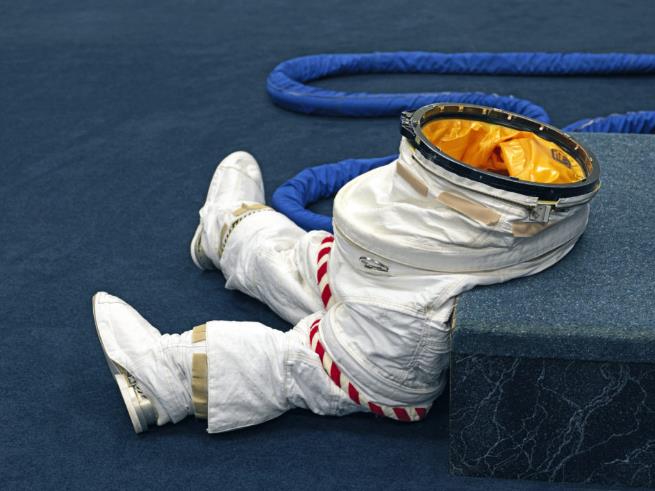 International artists bring their individual voices to a contemporary exploration of the continuing relevance of the historic 1969 lunar landing in the 2019 Ballarat International Foto Biennale (BIFB) exhibition To The Moon and Back.

While Bart Howard’s original version of Fly me to the Moon was written in 1954, it was crooner Frank Sinatra’s recording in 1964 that became closely associate with NASA’s Apollo program.

A copy of the song was played on the Apollo 10 mission (which orbited the Moon) and became the first music heard on the Moon when Apollo 11’s Buzz Aldrin played it on a portable cassette player. It became synonymous with the Moon Mania that swept the globe, in the wake of the space race which saw America trump Russia by landing an astronaut on the Moon on 20 July 1969.

Fifty years later Moon Mania has landed again this month as that anniversary is celebrated globally with exhibitions, talks, workshops, music – yep anything and everything with a heroic lunar theme.

Australia has particularly embraced the anniversary narrative because it was pivotal in that first journey. The Parkes Observatory, in regional NSW, received and broadcasted the Moon landing, owning the claim that it beamed Aldrin’s first steps to the world.

CSIRO’s Parkes radio telescope received television signals that allowed six hundred million people – one fifth of humanity at the time – signalling not only a new era in space science but a new era of contemporary media. 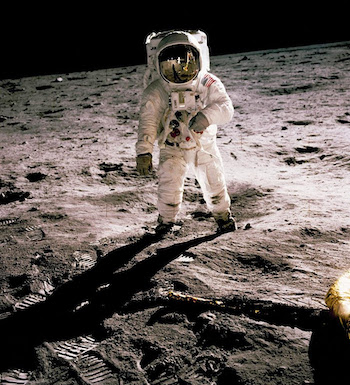 But is the celebratory tone of these anniversary exhibitions asking enough questions? The tone of conversation has shifted dramatical in that 50-year passage.

While in 1969 it was very much a political race between America and Russia, today it is more a conversation tinged with environmental concerns, fiscal responsibility and lack of transparency. What is Australia’s relationship with America today?

Let’s be clear. Given Australia’s value to America, a US presence on our soils has consistently remained since. How then are our artists presenting these questions in this millennium’s moon mania?

‘Australia and CSIRO are world leaders in radio astronomy and antenna design. This is why NASA came to Australia and the CSIRO Parkes telescope, for our support and geographic location. It’s also the reason why we continue to play a role in NASA space missions,’ said John Sarkissian, Operations Scientist at CSIRO’s Parkes radio telescope – at the release of a new commemorative coin by the Royal Australian Mint. 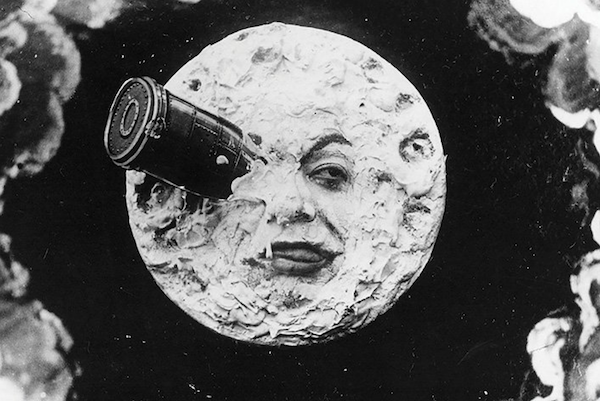 Moon mania for a new Millennium

Geelong Gallery Curator Lisa Sullivan has created an interesting slide across time in her exhibition, The Moon at Geelong Art Gallery (15 June to 1 September 2019).

It brings together artistic responses to the Moon – well before Aldrin’s iconic landing – to artworks from the era of the 1960s space race, and the contemporary artworks by Gen X artists who grew up in the shadow of the moon landings. It is these contemporary responses that pull on scientific knowledge acquired through space exploration, as well as diverse references from popular culture.

Melbourne artist Louise Weaver has created new components for her installation Moonlight Becomes You and Geelong-based artist Janet Dawson painted a new work for the exhibition.

Similarly, another Victorian event has broached the topic with a contemporary inflection. Curators Rebecca Najdowski and Dr Colleen Boyle have created an exhibition as a highlight of the 2019 Ballarat International Foto Biennale (BIFB), To The Moon and Back (pictured top).

Within the heritage-listed Ballarat Municipal Observatory and Museum, a diverse group of international artists bring their individual voices to a contemporary exploration of the continuing relevance of the historic 1969 lunar landing and its lasting photographic legacy.

It is that blend of old and new that has also been the approach that Casula Powerhouse Arts Centre (CPAC, Sydney’s outer west) has taken, with a very full cross-disciple program, GIANT LEAP that sits around the five specially curated exhibitions.

Memories of the Moon Landing draws on responses of Liverpool City locals, who come from 150 countries around the world (many of whom lived elsewhere in 1969) and their memories will capture the global nature of the event.

In Astronaut artists Adam Norton, David Haines and Joyce Hinterding, Tony Albert, Darren Sylvester and Chris Caines consider space exploration from the perspective of the astronaut, moving from a performative aspect of history to the notion of the colonisation of new lands.

Future includes work by artists Christelle Hug, Clinton Gorst, Michael Cook, Kalanjay Dhir and David Greenhalgh and turns to the artworks of the 1950s and 60s and their creative imagining of the future. Drawing on the films and posters of this time, the artists have created their own updated versions of future cities, transport, domestic gadgets and Artificial Intelligence, providing both utopian and dystopian visions.

In conjunction with GIANT LEAP, Liverpool Regional Museum will also present ONE SMALL STEP (22 June – 7 September), a re-creation of the Hilton Space Lounge from Stanley Kubrick’s iconic film 2001: A Space Odyssey. The immersive experience will blend original NASA footage interspersed with hit music and record sleeve artwork from 20 July 1969 from countries around the globe.

‘The moon is an omnipresent piece of all our lives, no matter which culture you come from. It remains a source of wonder for many people around the world,’ said CPAC Director Craig Donarski. ‘The GIANT LEAP program brings together multiple perspectives of the moon landing, exploring how this monumental event was perceived at the time, and continues to inspire people today.’ 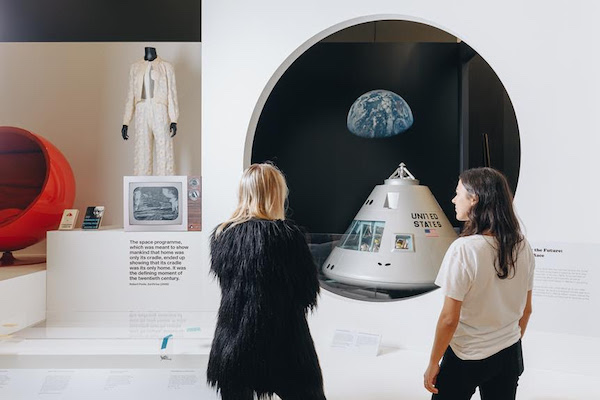 The broken record of space aesthetics

In contrast to these contemporary takes, exhibitions at the Powerhouse Museum (MAAS, Sydney), the National Museum of Australia (NMA, Canberra) and Melbourne Museum chose a more conventional path for the anniversary, documenting the history rather than questioning it.

This doesn’t discount that these are great shows – especially for kids. Remembering at these milestones is always a great reality check to how far we have advanced.

The Powerhouse show, Apollo 11 brings together over 200 objects from lunar kitsch to collected moon rocks, as well archival objects from the Powerhouse Museum collection and a new virtual reality work created with UNSW’s iCinema, where visitors can experience the Apollo 11 mission from the unique perspective of Michael Collins, the third astronaut who remained in orbit aboard the Command Module.

Among the highlights are Luke Jerram’s iconic Museum of the Moon, a seven metres diameter, internally-lit artwork that hovers in the vast industrial space of the museum. It combines detailed NASA imagery of the lunar surface with a sound installation by award-winning composer Dan Jones. Each centimetre represents 5km of the moon’s surface.

In Canberra at the NMA, the exhibition Tracking Apollo: 50 Years since the Moon Landing turns more closely to Australia’s involvement displaying equipment from the Honeysuckle Creek Station, including the antenna’s track ball and a tracker’s headset, console from the Orroral Valley Tracking Station, along with some commemorative memorabilia (until 14 August).

While in Victoria, Scienceworks and the Melbourne Museum have joined in the Moon Mania. Melbourne Museum also turns to a moon rock as its centrepiece of the exhibition Dynamic Earth, collected by NASA Commander David Scott during the Apollo 15 Lunar Mission in 1971. Scienceworks has a program of screenings Footsteps on the Moon, Planetarium Nights and Moonbase ONE, which largely which chronicles the history of space exploration from the first artificial satellite in 1957 to the modern era.

Lunar rocks seem to be the winning object across many of the anniversary programs – but one might argue that fondling a rock leads to little provocative environmental thoughts.

Canberra leads with moon rock mania. Four moon rocks will be on display around the capital as part of a trail linking Geoscience Australia, NMA, Questacon, CSIRO’s Deep Space Communication Complex and the Australian National University.

For the first time in the southern hemisphere, people will be able to get their hands on a piece of the moon in Canberra. A fragment of lunar sample 70215, known as the lunar touchstone, will be on display at Geoscience Australia on long-term loan from NASA. This rock was bought back on the Apollo 17 mission.

At Questacon, a fragment of the moon brought back on the Apollo 11 mission has been loaned from the National Archives for display alongside an Australian flag the crew took to the moon.

Australian National University astronomer Brad Tucker told The Canberra Times: ‘Our moon sculpture allows you to not only touch a piece of the moon but to walk on it – experiencing first-hand the wonders of space,’ he said. 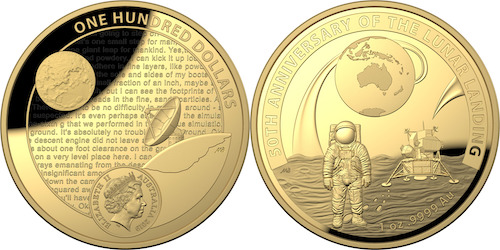 Sticking with Canberra, it would seem that not a great deal has changed since 1969, but if anything we might have become more conservative. The Royal Australian Mint has released a special domed coin to celebrate the landing anniversary. Designed by Adam Ball, the text in the background is an excerpt from the transcript of Commander Neil Armstrong’s journal of the landing, with the lunar module Eagle on the verso.

‘We are honoured to share these unique coloured-domed coins, including the magnificent collaborative set with the United States Mint, to mark 50 years since Australia shared the first human perspective of the Moon’s surface with the world,’ said Royal Australian Mint CEO, Ross MacDiarmid.

It sits in bright contrast to the Museum and Art Gallery of the Northern Territory (MAGNT) in Darwin, which rather makes the lunar conversation relevant by connecting it to environmental issues. They invite audiences to get close to a lunar meteorite and discover the connection between the lunar phases, animals and human life, in their exhibition Between the Moon and the Stars (22 March 2019 to 29 March 2020).

‘We delve into the idea of the Moon and stars being seasonal calendars. When an animal like a migrating bird arrives at a particular island, or hammerhead sharks arrive to breed or feed, this often coincides with particular time of year, marked by the appearance of particular star constellations. A number of Torres Strait Islanders have depicted this in amazingly intricate linoprints,’ said Senior Curator, Dr Chris Glasby

Looking across the cultural calendar this month, it is clear that Australian galleries and museums are still driven by the popular thematic exhibition. However, it could be argued that we may not always hit the point in using these moments to broach contemporary conversations.