Review: You Know We Belong Together

A call for inclusion and acceptance, through acknowledging diverse talent, delivers an intense emotional impact.
Nerida Dickinson
[This is archived content and may not display in the originally intended format.] 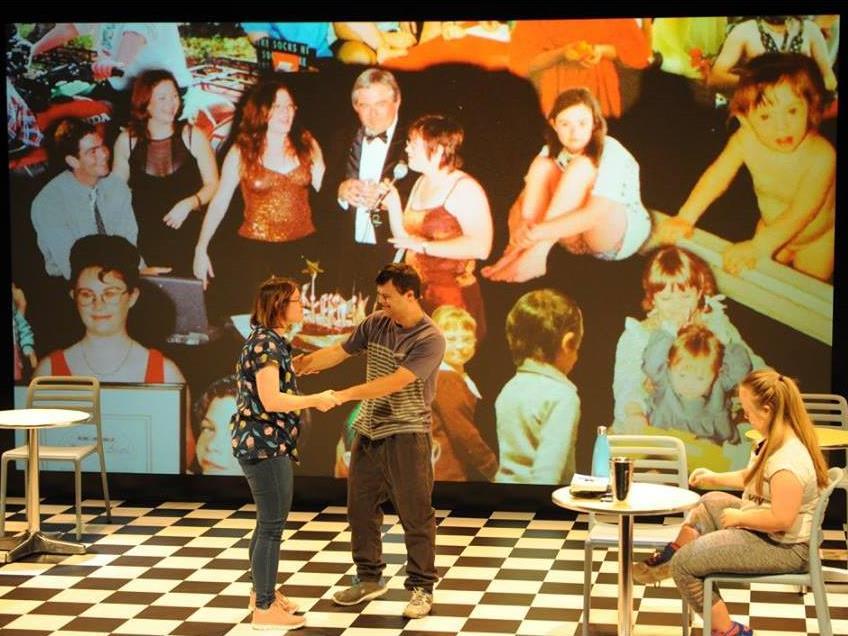 Julia Hales, Joshua Bott and Lauren Marchbank in You Know We Belong Together. Photo by Toni Wilkinson.

From 1953 to now, Perth Festival annually programs a diverse collection of global talent to showcase highly polished, intriguing and entertaining works across all art forms. Festival performances go beyond standard theatrical fare to illuminate, sometimes devastate, with truth and insight on particular – often specifically localised yet universally applicable – aspects of life. A Perth Festival commission, the world premiere of You Know We Belong Together combines various art forms encompassing all these attributes, in an intensely personal and distinctly Australian production.

Lead artist Julia Hales is the heart of a tightly-delivered show. Her passion shines through in a collaborative work that is not only clever, poignant, highly-researched and funny, but stridently demands appreciation of the essential humanity and deep pool of talent ignored due to perceived disabilities. Strongly critiquing the exclusion of disability talent from mainstream culture and accolades for abled actors mimicking disability, she proves her point through showcasing the accomplishments of local artists with Down syndrome.

A strong, independent woman with 20 years of performance training and experience, Hales generously recounts her family memories, takes us into her home, introduces her friends and shares her dreams. Her two main dreams are to find love and be married by the age of 40 (did she mention she’s single?), and to play the first on-going Down syndrome character on Home and Away.

Eschewing a simple narrative, Hales delivers a series of autobiographical vignettes, dance performances and video interviews, all returning to her passionate obsession with the beachside soap opera. (She has been a dedicated viewer since it commenced in 1988.) Hales intersperses her assured narration with sharp comedic asides, observing that as a professional she is missing the current episode to be on stage for us, further confirming her opening declaration that a disability should not be seen as a person’s only defining attribute.

Hales has many friends, who make their own contributions and support her expositions of topics around Down syndrome, including the clinical definition, historical and current medical attitudes and reactions, challenges, importance of family support, and limited expectations of broader society.

The achievements of Australians with Down syndrome are celebrated, Hales drily commenting that while she herself has a great body, we can’t all be supermodels like Madeline Stuart, who is obviously too busy in the Paris fashion scene to be on stage here. The featured local artists are not afraid to dream big; Hales’ dream of an on-going national television role is outstripped by Rockingham’s own Tina Fielding’s Hollywood ambitions to write screenplays for megastars.

Interviews both on screen and on stage emphasise the mixed joys of life with and around Down syndrome. Hermione Merry’s articulate discussion as a parent of a child with Down syndrome is interesting, but is eclipsed by snippets of Hales interviewing fellow creatives Patrick Carter, Lauren Marchbank and Fielding on the big topic of love, including first loves, relationship issues and heartbreak. These compassionate and insightful studio recordings elicit honest, funny, sweet and tragic responses, foregrounding the intensity of the emotional lives with Down syndrome but also reflecting the commonalities of experience for all people.

Documentary-style filming of the life and love of Melissa and Mark Junor, their courtship, wedding and devoted married life full of shared interests and friendly banter, is enhanced as they join Hales to demonstrate their ballroom dancing. Marchbank, dancer and choreographer, performs her solo piece I Am Okay With It while its filmed component is projected on screen, her fluid movements responding to her daily experience of strangers’ intrusive observation – “everybody is watching” – by defiantly embracing her creative self. The best dancer on the floor at Hales’ 21st birthday party, Joshua Bott, expresses his love of Michael Jackson in a dynamic dance set, his confident, sharp dance skills honed through training, mentorship and group performances.

Hales seamlessly weaves her life journey through her discursive performance, displaying photos of her family and sharing anecdotes of key events. The loss of her mother, Carol Hales, is a constant reference point, but any inclination toward maudlin reminiscence is abruptly countered by relating any personal transformative moment, whether good, bad or strange, to incidents and characters in Summer Bay. Hales’ delivery, full of heartrending displays of emotion, elicits our sympathy to suddenly throw us off-guard with her quirky analysis of the deeper meanings within Home and Away’s highlights and cliffhangers.

Hales’ own acting ability, beyond her skills as a presenter and advocate for diversity and acceptance in mainstream culture, demonstrates the opportunity for Home and Away to include an on-going character with Down syndrome. With a soapie-style back story (spoiler alert – she was secretly adopted at birth, growing up in Eagle Bay when she came from Summer Bay), Clare Smith returns to her birthplace to find her roots. Hales steps into the role with relish, drawing supporting cast members from the audience and using both her acting confidence and obsession with soap opera motifs and storylines to create a strong case for Clare Smith to become part of the soap’s cast, seeking family, love and maybe a good fishing spot.

Accessibility is key throughout You Know We Belong Together; an Auslan interpreter is integrated into the cast and has her own place in the set arrangement. Video interviews include surtitles and the auditorium itself allows room for audience members to avoid navigating stairs.

Simple stage design allows Hales’ presentation to pivot from lecture to acting scene to interview space to dance floor, accommodating a cumulatively increasing number of friends who remain on stage as Hales proceeds to her next topic. Commencing as an empty stage with a chequered floor, the addition of round tables and café chairs combined with subtle shifts in lighting evokes the classic feel of the local Summer Bay diner, the one with the black and white floor before the kitchen fire caused Alf and Ailsa to relocate… a detail illustrating Hales’ long-standing devotion to Home and Away.

From the opening hypnotic video of waves gently breaking on a beach, to a joyful closing scene that invests the earworm theme song with meaning and wonder, and an unexpected, laconic and heart-warming coda, You Know We Belong Together is a movingly sweet, sad, angry and joyful celebration of passion, determination and spirit.