Our Ladies of Perpetual Succour

An energetic and entertaining assault on the senses by a group of Scottish schoolgirl choristers ‘going mental’.
Jo McEniery
[This is archived content and may not display in the originally intended format.] 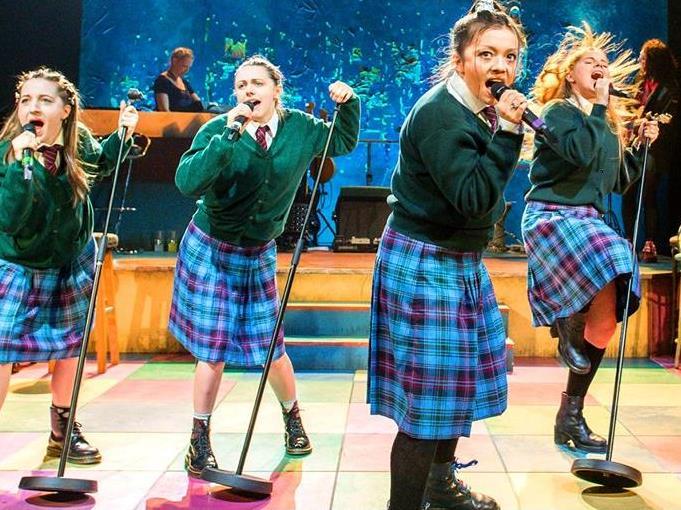 Our Ladies of Perpetual Succour, photograph via Melbourne Festival.

Our Ladies of Perpetual Succour is currently shocking audiences with its barrage of obscenities and rebellious schoolgirls at this year’s Melbourne Festival.

Lee Hall, creator of Billy Elliot, has tasked himself with bringing the most badly behaved of adolescent Catholic schoolgirls to life with this adaptation of Alan Warner’s novel The Sopranos.

Pigeonholing eludes this show. On the one hand it’s like going to a loud rock concert where the band has had a little to much to drink; on the other, it’s like crawling back into the awkwardness of your teenage years and having your long-hidden embarrassments dredged up on stage for all to see. It’s in turn endearing and cringe-worthy, funny and tragic, serious and light-hearted.

The piece features six students from Our Ladies school in small town Oban who are on their first trip to Edinburgh to perform in a choral competition. The journey turns out to be more a rite of passage than a singing contest. In fact, the competition itself barely rates a mention when up against the likes of underage drinking, unplanned pregnancies and unconventional ways to lose one’s virginity.

For a piece that parades as a shallow tale of hymn-singing sopranos who make a beeline for tequila shots and inappropriate men, this show effectively touches on the challenges, camaraderie, peer-pressure and insecurities of life from the perspective of a group of teenagers.

The group performs beautifully as an ensemble and their sheer sense of delight to be a part of the show is palpable. Aside from a few lost-in-translation moments due to local gibes not hitting the mark on this side of the planet and the occasional too thick Scottish brogue, the girls deliver a slick and cohesive performance.

The girls are joined on stage by a three piece live band, which adds to the concert effect, particularly when the singers trade their chorister cluster for head banging and trademark rock star moves.

Our Ladies of Perpetual Succour walks a fine line between being outrageously funny and over-the-top crude, however for the most part the balance is effective.  Hall’s adaptation is impressive in its ability to mould the likes of Mendelssohn and Bartók with Bob Marley and Electric Light Orchestra. A deceptively meek and tonally impeccable ‘Lift Thine Eyes’ soon gives way to raucous renditions of ‘Don’t Bring Me Down’ and ‘No Woman No Cry.’

In a way, Our Ladies of Perpetual Succour is the anti-musical – while there are impressive show-stoppers and a range of feel good moments, the show follows no predictable narrative and most certainly does not deliver a formulaic happy ending.

It’s difficult to place this work in terms of target audience. It’s too offensive to take your grandma or school-aged children to, and is probably not a wise choice for a first date or a prudish mother-in-law. The general consensus from Friday night’s theatregoers was that it was an enjoyable yet bumpy ride, but a little on the long side for a one-act performance.

Our Ladies of Perpetual Succour

Jo McEniery is a Melbourne-based writer and poet.