Women of Fairfield turns the table on male cultural dominance in Western Sydney, in a local festival with global resonances.
Gina Fairley
[This is archived content and may not display in the originally intended format.] 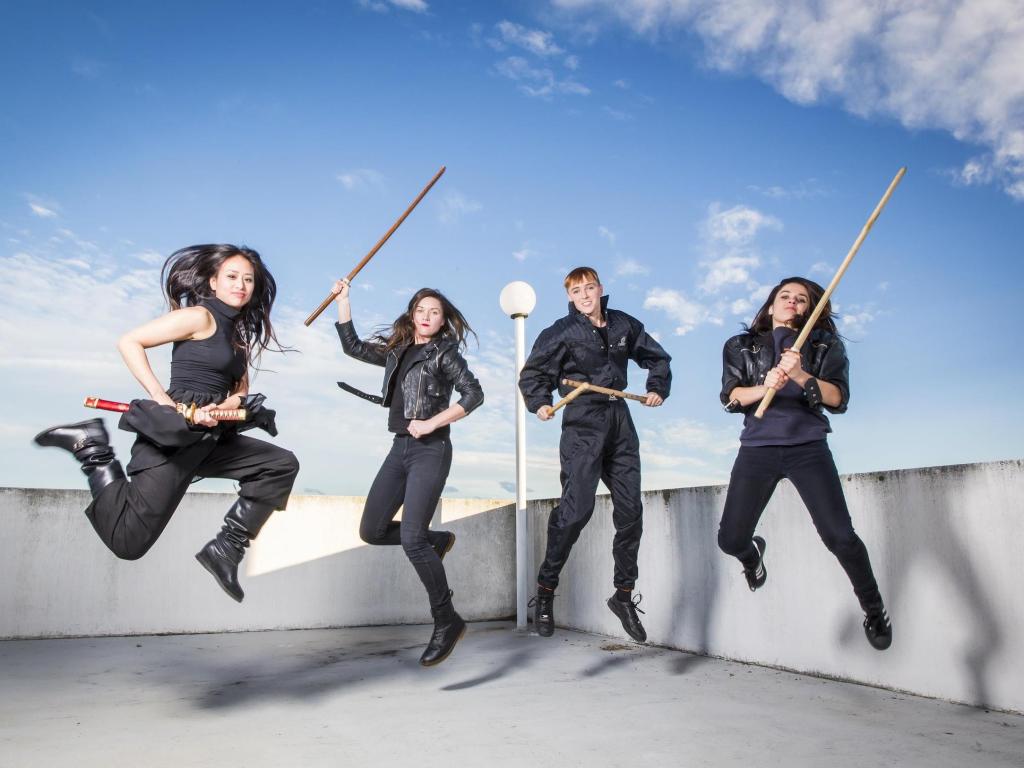 Hissy Fit and Maria Tran on the roof of a Fairfield parking lot where they will perform; image courtesy and @ the artists, photo Anna Kucera

Therese has co-curated the project Women of Fairfield with MCA C3West Senior Curator Anne Loxley, a two-night event on 7-8 November that brings the experiences of women in Western Sydney to the fore.

The project explores how women navigate the complexities of public space within a community that shares profound religious, cultural and social differences.

It is a response to conversations about the dominance of men in Fairfield’s public spaces, and is the first contemporary public art project of its kind in Fairfield.

Therese told ArtsHub: ‘For a vast number of reasons there is not a lot of visibility of women in the civic space. This project is about putting women’s presence back in to those spaces. It also allows women of different cultures to come together and to be visible to each other as well.’

Fairfield is known as “Little Baghdad” and has the largest Iraqi community in the world outside Iraq. It has also been described as Australia’s most multicultural community with 147 cultures co-existing. That makes for great food, great music and great art.

Unlike so many projects where the “hot” contemporary artist is parachuted in for an enriching cultural experience, this project has been two years in the making in order to build local relationships.

Video and performance artist Nat Randall said: ‘There is a level of trust that can’t be forced. This project purposely had a long lead-time to make sure those relationships found their own time.’

Randall is part of the collective Hissy Fit along with Jade Muratore and Emily O’Connor. They have collaborated with Fairfield-based, internationally celebrated martial arts star, Maria Tran to create a new work Supreme Ultimate, a three-channel video and performance piece presented on the top of the Downey Lane Car Park (pictured top).

‘It’s bloody massive and a bit overwhelming,’ said Randall. ‘It has been a really eye-opening experience. I guess we have addressed our own naivety about working with community.’

‘There are cultural differences that we have had to move through so it is confronting those differences and what drives each of us to make work in different realms – we learnt a lot about why we do what we do and what unites us despite cultural background,’ she added.

‘This has flipped our practice on its head; it will absolutely affect our process moving forward in a positive way.’

Their performance will crescendo into a live mass action involving about fifty women from the community.

‘All curators want to work with good artists, but the trick is working with them when they are in their stride; when they are making really good work,’ said Loxley.

Kate Blackmore will present a new video work in a disused shop and is the result of a connection with Assyrian-Australian bride, Nahren Georges.

All Wedding Wishes is part-documentary, part play on the role that professional videographers have in capturing culture in diaspora communities. It bares witness to the importance of the wedding ritual in Fairfield’s Assyrian community where ancient and modern rituals collide.

‘For the people whose country is only known for war in mainstream media, celebrating and documenting happy moments is incredibly important, and Kate has captured that with great sensitivity,’ said Therese.

For the two-night event, Assyrian wedding musicians and dancers will parade down Fairfield’s main street inviting audience members to enter the artwork installation.

‘It is very important that women are coming out together through creative practice to celebrate and be seen in these installations,’ Therese added.

Again turning to a ubiquitous site of civic engagement, Claudia Nicholson will activate Fairfield Chase food court with an installation developed through dialogue with women from Fairfield’s Central and South American communities – the workers and business owners of the Food Court.

As a Colombian-born artist, adopted and raised in Sydney, Nicholson’s practice addresses issues around multiple identities, belonging and separation from homeland.

Pero no cambia mi amor (But my love doesn’t change) celebrates and profiles women who have defined, on their own terms, their social and cultural spaces.

Nicholson also worked with young women and girls to create lo-fi video self-portraits, which will be presented on television screens throughout Fairfield Chase.

Zoe Scoglio, in contrast, chose to work across three different cultural groups – women from the Khmer, Aboriginal and Iraqi communities – for her sound work In The Round.

Using voice and song as a launching point, Scoglio has collaborated with each of the three groups to create a sound collage, which will be played back from cars decorated by the women as they do laps of the streets of Fairfield City at Dusk.

This work addresses both the absence and presence of women in the streets of Fairfield at night.

‘There is always a tricky balance, especially with approaches to different feminist discourse and its different levels of intensity when working with community and different cultures and different class backgrounds,’ said Randall.

‘There is a certain bubble that we live in and it’s hard to leave sometimes. We are all white women from the city. This project has been a way to find a common ground and to find out what those women are comfortable with – to create something from the ground up in terms of image making with the women,’ she added.

Women of Fairfeld is presented with the support of Fairfield City Council and has been facilitated by Jiva Parthipan, Director of Community Cultural Development, STARTTS (NSW Service for the Treatment and Rehabilitation of Torture and Trauma Survivors).

Loxley said the project has been a very professional and rigorous process.

C3West is based on the idea that artists can bring unique value to situations beyond the gallery. Since 2006, C3West has created contexts in which artists work strategically with communities, placing contemporary artists at the core of these projects – giving voice to local issues and collaborating with the business sector in new ways.

‘Fairfield hasn’t been swallowed by a shopping mall yet. It is a jewel of a centre, so we of course wanted to work with that. It is a very local project, but has a global resonance.

‘The value of these sorts of projects in the public domain is that they show people that things can be different,’ added Loxley.

Women of Fairfield is free to attend and will be staged on Friday 7 and Saturday 8 October, from 6 pm until 9.30 pm. It is walking distance from Fairfield train station.

There will be an event at the MCA on Saturday 3 December to reflect on shared experiences in a discussion panel with the artists, partner organisations and members from the Fairfield community.