Theatre’s demise has never been so entertaining

Performance collective post and Hong Kong Repertory Theatre have cut up the Western theatrical canon and reassembled it as irreverent, bilingual Frankenstein’s Monster of a production.
Richard Watts 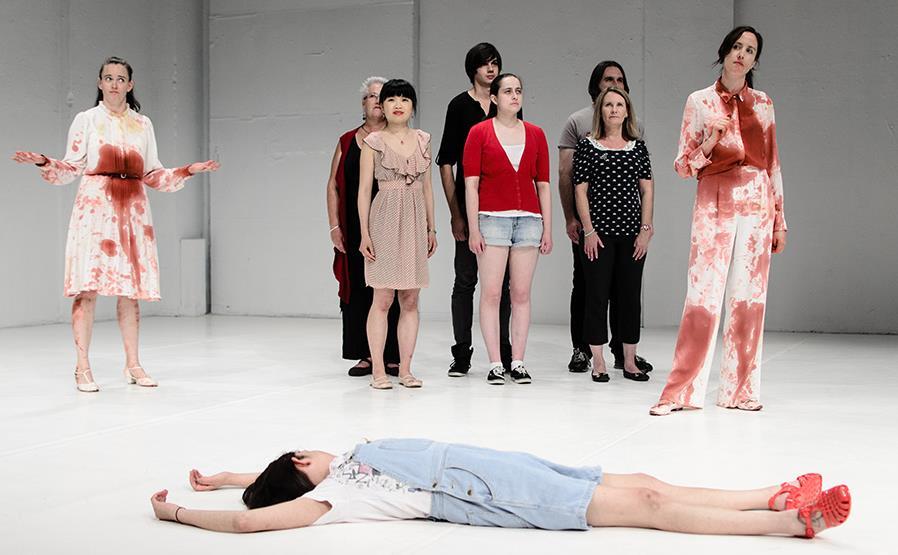 Update: In light of the latest health advice, all Oedipus Schmoedipus performances scheduled for 18–28 March in the Union House Theatre have been cancelled and ticket holders will contacted for a full refund.

When Melbourne-based performance maker, writer and theatre artist Mish Grigor fires the western theatrical canon, the result is a highly entertaining bloodbath – a simultaneous celebration and interrogation of plays by dead white males.

‘There’s nothing wrong with Shakespeare and all these other writers and their texts per se,’ said Grigor, one of the founding members of Sydney-based theatre collective post (alongside Zoë Coombs Marr and Natalie Rose), whose Oedipus Schmoedipus returns to Melbourne this month as part of Asia TOPA.

‘Oedipus Schmoedipus is more about us questioning why? Why these particular plays? And what kind of values do they represent? The white male gaze; the heterosexual nature of 99.9% of the relationships in these plays; the really traditional family structures … if we’re just seeing that kind of story told again and again on stage it means that social change is not reflected, social realities are not reflected, and I think that becomes a bigger and bigger problem.’

First presented at Belvoir in 2014, post’s Oedipus Schmoedipus playfully and bloodily upends the ongoing debate about the death of theatre and the importance of dead white males, and enlists a cast of 25 volunteers to help its performers do so.

For its Asia TOPA season, two different versions of Oedipus Schmoedipus will be performed, one version in English (with Cantonese surtitles) and the other in Cantonese (with English surtitles). The Melbourne run follows a highly successful Cantonese adaptation of the play presented by Hong Kong Repertory Theatre, who have partnered with post for this encore Melbourne season.

Grigor said she initially doubted the translation into Cantonese would be successful. ‘We’ve always felt that our work is really particular to Australia and uses a lot of Australian slang and puns and all these kind of things,’ she explained.

Urged on by Bobo Fung, Hong Kong Repertory Theatre’s Resident Director, the post team sat down with a translator to work on a new script.

‘We went through every line of the show and looked at how it might be translated; looked at the actual meaning or the dramaturgical function of ever line, looked at the jokes and how they worked or what kind of joke they were, and then started a discussion between ourselves and a roomful of Hong Kong-based artists. We all got really excited about a shared history of British cultural colonialism and thinking about the way culture is passed down and how its framed and how we receive it,’ said Grigor.

She soon discovered that translating Oedipus Schmoedipus into Cantonese would be a significant undertaking.

‘Cantonese is so unfamiliar to myself and Zoe and it really is a complicated language. It’s a tonal language, so rhyming becomes much more complex than it is in English, for example,’ Grigor told ArtsHub.

And then there was the challenge of ensuring the jokes were still funny, she continued. ‘To give you a specific example, we have a scene that’s based around the mis-hearing of the word “island” in relation to kitchen islands. And that was now completely irrelevant because in Hong Kong, everyone’s kitchen is really small – there’s no way that you would want or need a kitchen island,’ she said.

‘So for the Hong Kong season we made a sort of political joke about using recovered land to make an island that would add to the archipelago of Hong Kong. But we’ve now taken that out of the Asia TOPA season because it’s too specific a joke for the larger Cantonese-speaking diaspora – so the process is ongoing.’

Adapting Oedipus Schmoedipus opened up the possibility of incorporating some Hong Kong cultural references into the work.

‘The sound palette that we use in the English version is all canonical, it’s all Mozart and the big tracks that you’ve heard on call waiting all the time, so you kind of feel like “Oh I know this track, is it from maybe a Nescafé ad? It’s really familiar.” We experimented with playing some Chinese music but it didn’t quite serve the integrity of the piece. We felt like keeping it to specifically Western influences actually allowed us to talk in a more political way.’

Grigor hopes that Melbourne audiences will seize the opportunity to compare and contrast the two different iterations of Oedipus Schmoedipus during its Asia TOPA season.

‘It’s been so interesting to be in Asia TOPA in terms of all the conversations around collaboration and cross-cultural work and how we do that. And I’d love people to see the work one week in English and then the next week in Cantonese, because it has a whole different performance rigour and training that Zoe and I don’t have and so it’s such an amazing and uncanny experience to sit in the same show in two different languages. It’s so weird and wonderful, and I really hope that lots of people do have that experience.’

Oedipus Schmoedipus runs from 18-28 March (18–21 March in English, 25–28 March in Cantonese) at Union Theatre, The University of Melbourne, Parkville. Visit the Asia TOPA website for details.

In light of the latest health advice, all Oedipus Schmoedipus performances scheduled for 18–28 March in the Union House Theatre have been cancelled and ticket holders will contacted for a full refund.