Theatre that fights our inertia on the climate crisis

In their new immersive eco-horror, Sarah Aiken and Rebecca Jensen of Deep Soulful Sweats craft a dark, hopeful and irreverent cautionary tale.
Alison Croggon
[This is archived content and may not display in the originally intended format.] 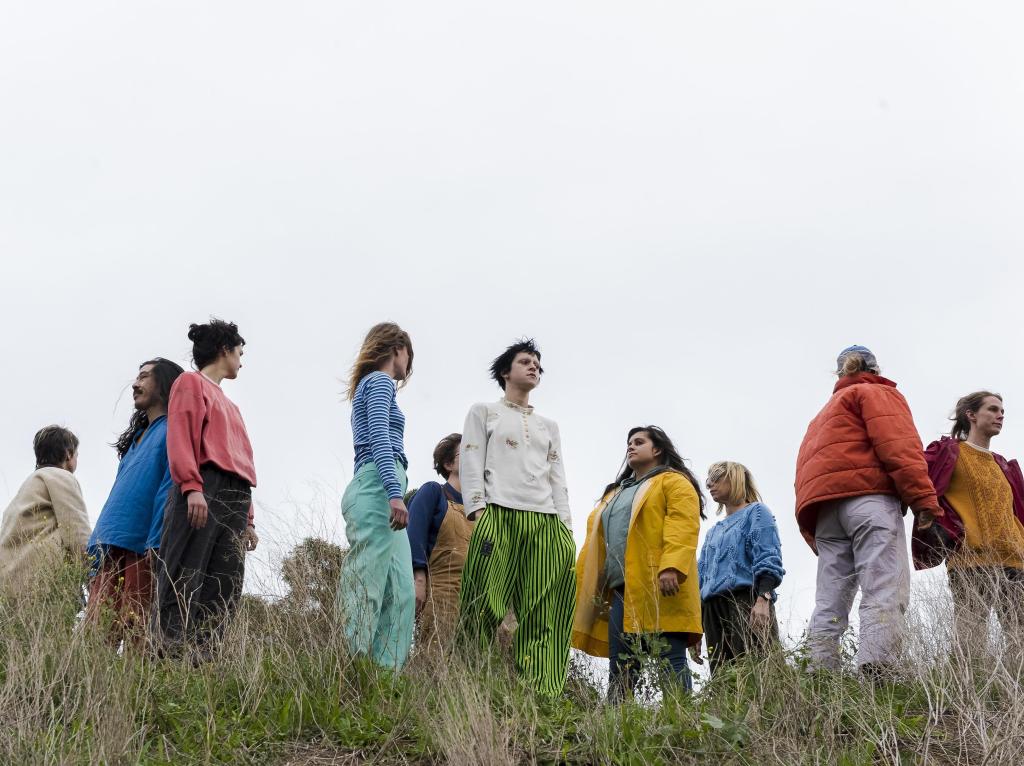 Sarah Aiken and Rebecca Jensen of Deep Soulful Sweats are pushing the boundaries of their practice in their new show; image Gregory Lorenzutti.

As the Deep Soulful Sweats, they’ve been working with the unpredictability of audiences since 2013, hosting participatory dance experiences at venues as various as Dark MOFO, the Ian Potter Museum of Art and the Castlemaine Festival.

‘We want people to feel okay about being part of things and we care about consent.’ – Rebecca Jensen

But their latest show, What Am I Supposed To Do (WAISTD), is pushing their practice into new territory. You can’t fault their ambition: WAISTD is an attempt to confront the major issue of our time, our communal lack of action on the climate crisis.

It’s commissioned by Arts Centre Melbourne in partnership with Melbourne Fringe as part of their unique Take Over! series, which funds an independent Australian collective  to create and present work in the Fringe.

Aiken and Jensen want to bring their audiences with them in exploring the sense of powerlessness that afflicts us all when thinking of overwhelming global catastrophe.

Participation is not merely the form of the show: it’s also its central question. ‘We need to think about the ways we’re complicit in the mess the world is in,’ said Aiken. ‘What does it mean to participate? We’re using that to explore our own questions around climate change.’

‘That’s what led us to the title – what are we supposed to do?’ said Jensen. ‘We don’t know how to contribute in a way that’s clear and direct and good. Good intentions don’t always work out.’

An immersive eco-horror exploring human hypocrisy in the face of the climate catastrophe, WAISTD digs into the stasis that holds us back from doing anything about it.

‘We’ve drawn a lot from a New York Times essay, Losing Earth: The Decade We Almost Stopped Climate Change,’ said Aiken. ‘It’s about the conversation in the 1980s, which is basically exactly the same as the conversation we are having today. All the science was known back then.’

In keeping with that inspiration, Jensen said that the show has a late 20th century vibe, drawing on schlocky B-grade Australian classics such as Long Weekend (1978) and Razorback (1984). ‘We’re recreating some of the scenography and movement from these films, collaging scenes, sometimes trying to run them backwards,’ she said. ‘Which is actually very difficult.’

A major theme is cracking open the role of nostalgia for millennials. ‘It’s sold to us in lieu of having a future,’ said Aiken. ‘We can’t move forward, so we move backwards instead. We can only imagine forward in a kind of Mad Max future. Which is very disturbing.’

They also want to challenge the narrative arc familiar from Hollywood movies, where the hero sweeps in at the last moment and saves the world. ‘It’s about sitting with the discomfort that there’s no easy fix,’ said Aiken. ‘In reality, there is no hero.’

WAISTD has six performers but there are no spectators. Audience members will be asked to participate in a host of ways – by making sound, by moving or interacting with objects. As Jensen said, ‘It’s a big experiment.’

‘We’ve launched ourselves into the deep end,’ said Aiken. ‘And maybe we’ve bitten off more than we can chew. But our biggest worry is being too safe.’

The pair hastens to explain that the audience participation is carefully designed: introverts are safe.

‘We don’t stand up there asking for volunteers,’ said Jensen. ‘We want people to feel okay about being part of things and we care about consent.

‘We don’t want people who are terrified about public speaking feeling like they have to take the microphone and speak a text. We work on creating experiences where people feel that they have autonomy.’

They’re excited about working at Arts Centre Melbourne. ‘It’s an institution filled with ballets and operas and orchestras, and as young independent artists invited in, we’re looking forward to wreaking a bit of havoc.’

What Am I Supposed To Do (WAISTD) plays at Arts Centre Melbourne from 18-22 September. Bookings at the Arts Centre website.