Something fresh in the state of Denmark 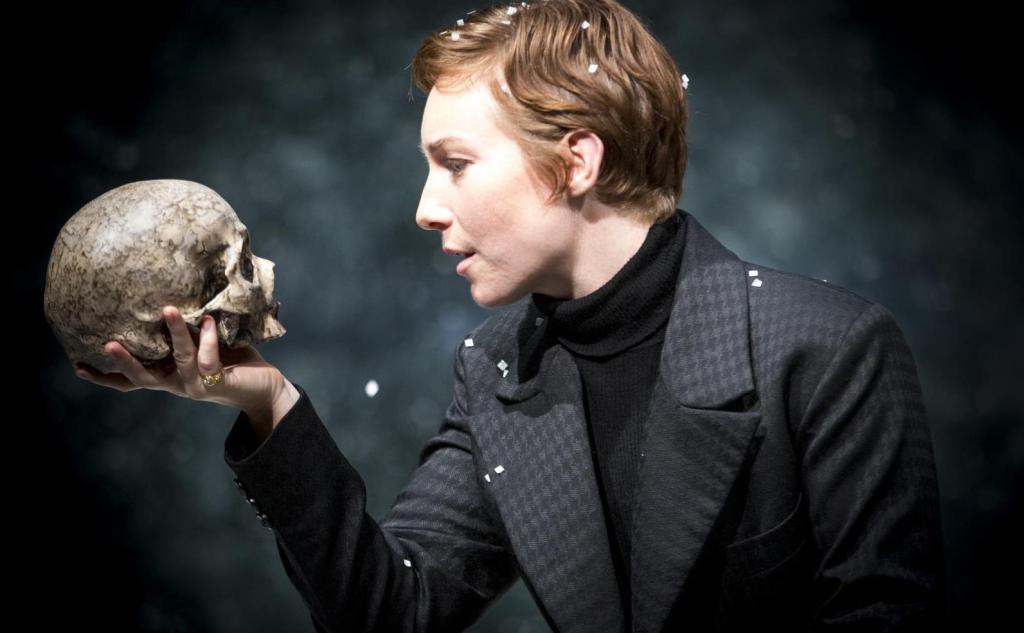 Balancing psychological complexity with emotional power, Hamlet is widely recognised as being Shakespeare’s greatest play, perhaps even the greatest play ever written.

Artist Anna Tregloan has never worked on a production of Hamlet before, but she is undaunted – even excited – by the opportunity to design the set and costumes for Bell Shakespeare’s new production of the play.

‘Because it’s one of the canonical works I have seen three or four productions of it, and all quite different productions. So not only are you referring to the text for your inspiration but there’s this larger picture – which is one of the things I find interesting about working with Shakespeare. It’s never just the play that you’re putting on; you’re almost staging a conversation for the audience with all of the previous versions of Hamlet that have gone before,’ Tregloan said.

‘It’s always of the time and place where it’s being presented, but there are always echoes of earlier productions that float into your head as you sit and watch the play.’

Opening Bell Shakespeare’s 30th anniversary season and directed by the company’s Artistic Director Peter Evans, this new Hamlet is focused on the intimate drama at the play’s heart.

‘Peter is very interested in Shakespeare’s interest in love – familial love in particular; the love between father and son, the relationship between a dead father and his son. Watching rehearsals the other week, it’s simultaneously a simple and very complex production. In many ways it’s quite straight up – a beautiful telling of a complex family story.’

The production’s design draws on a Sixties aesthetic, ‘a period that we’re currently quite nostalgic about,’ Tregloan explained. ‘And that’s only appropriate because within Hamlet there’s also quite a lot of nostalgia for the past; for how things were before Denmark became a bitter, sadder, darker place.’

Taking her visual cues from the glamourous lives of European royalty in the Swinging Sixties, Tregloan’s costume designs hint at the politics of the Danish court by emphasising the generational divides between the characters.

‘I’ve divided the generations and sections of society to an extent. So the royal parents and a lot of the politicians who move around them are a bit old fashioned, fairly conservative in their dress – they’re still glamorous but there’s actually quite a few 1950s references in there. And then there’s the student generation, which we’re also really interested in within the play; they’re the new shakers and doers and they’re there to make change, so they’re a bit groovier. It’s not the hippie era, it doesn’t quite go that far, but they’re definitely a bit more colourful and a bit more forward looking.’ 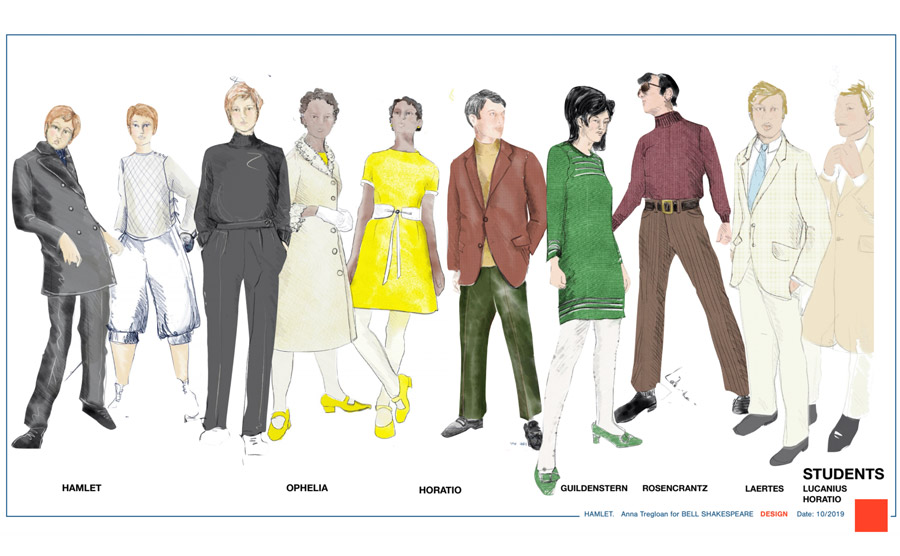 This early Sixties aesthetic is also reflected in the production’s use of projected Super 8 footage, while Tregloan’s set design echoes the play’s setting of wintery Denmark.

‘Clearly it is set in Denmark, and Peter already had the idea that it was during winter … and then I think we became very interested in the little isolated huts in those snow-swept landscapes, which are so very Danish – these beautiful little cabins. But while there’s a sense of comfort and cosiness within those spaces, they’re also isolated from the world,’ Tregloan told ArtsHub.

‘And the other thing about those houses, and certainly the beautiful images we were looking at, is that they often have open windows where you’re looking in from outside – these big open windows in the middle of a snowfield. They’re like little proscenium arches; this strange theatre isolated within the landscape.’

IN THE BLEAK MIDWINTER

It’s in this icy landscape that Shakespeare’s drama unfolds, as Hamlet (Harriet Gordon-Anderson) grapples with his emotions and his complicated response to his father’s recent death and his mother’s hasty remarriage to her brother-in-law.

The wintry landscape will play a key role in the play, Tregloan explained. ‘Yes, it will snow, and our plan is that it will snow enough for us to hide some bodies,’ she hinted.

‘Hamlet has a couple of practical challenges and one of them is the grave and that things need to be unearthed, and another is that the snow needs to be fought in. The way they are staging it at the moment, there’s actually a level of geometry and abstraction to it which takes the play somewhere else again. It’s going to be quite beautiful, that scene.’

Working with piles of fake snow will ensure the production looks impressive, but also brings with it a whole raft of challenges – not the least of which is fake snow’s ability to get into everything.

‘I’m prepared to be cursed by theatre techs around the country, and wardrobe people too,’ Tregloan laughed, before noting that keeping the fake snow clean is another concern.

‘The tech crew is working hard to determine how we manage the drop, but we’ll be re-using it, so the snow needs to be vacuumed up every night with a clean vacuum cleaner, so that it doesn’t get filled up with dirt and fluff. We’ll also have a sterile space backstage in the theatre so we’re not walking snow everywhere, and also not walking dirt into the snow or snow onto the shag pile carpet.’

‘I’ve been dropping quite a few snowfalls and fake bits of whatever from the roof in large amounts for quite a few years now, and do you know what’s nice? You go back and revisit a theatre a year or so later and there’ll be a little bit of gold glitter or a bit of snow in the corner and you’ll go, “Oh yes, that was me,”’ she said.