Remaking memories: The Merchant of Venice is not the play you remember

Directed by Anne-Louise Sarks, Bell Shakespeare’s latest production confronts the casual racism at the heart of the Bard’s beloved but problematic comedy.
Richard Watts
[This is archived content and may not display in the originally intended format.] 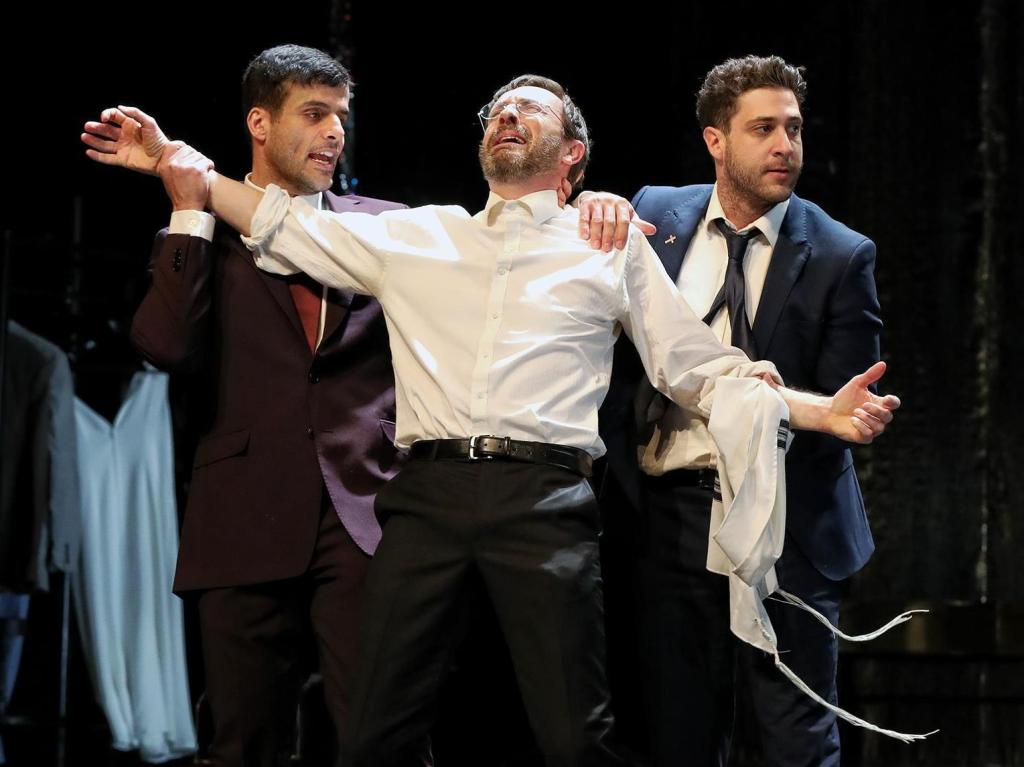 The character of Portia is invariably described as the heroine of Shakespeare’s The Merchant of Venice, while the play itself is often labelled a comedy. For Bell Shakespeare’s latest staging of the work – the company’s first since 2006 – director Anne-Louise Sarks was intent on creating a production that encouraged audiences to reassess their memories of the play.

‘This is the play that you remember but look again; look again with the eyes of this moment and perhaps this isn’t the play you remember. Perhaps there’s a little bit more inside this play than you got out of it back in the classroom when you first encountered it, or when you first saw it,’ Sarks said.

The production, which is now playing in Sydney after an extended national tour, marks the first time Sarks has directed Shakespeare; a fact which caused her some trepidation when initially approaching the play.

‘There were definitely moments of doubt in the process of editing the script or making it, where you think, “Oh, what if there’s something I don’t understand about this yet?” or “What if people are going to be devastated that their favourite lines are gone?” But I guess in the end I felt like, look, the play’s still going to exist and people can still do their other versions. You have to find a reason for this play to be on right now,’ she said.

‘It’s theatre, after all – it has to be relevant. It has to live in the moment every night.’

Book now for Bell Shakespeare’s The Merchant of Venice

To contemporary eyes, much about The Merchant of Venice is unsettling, including its anti-Semitism, its abrupt shifts between drama and comedy, and especially Portia’s sudden cruelty in the play’s climatic courtroom scene.

Rather than downplaying such tensions and concerns, Sarks’ production highlights them – with a particular focus on Portia, played in this production by actor Jessica Tovey.

‘What makes someone who actually has very little power and freedom, who has a lot of money but actually in her own life doesn’t have the power, what makes her take that opportunity and then go so far in that moment?’ Sarks muses.

‘People love Portia, they have such a great affection for her, but I think for me it was far more interesting to have to question where that affection comes from, and to really sit with the consequences of where she takes the final moments of that scene. That’s something that Jess and I spoke about a lot,’ Sarks said.

Having premiered in Orange in July and toured extensively before opening at Sydney Opera House in late October, the production is tightened and road-tested. Given the play’s demanding nature, Sarks is full of praise for her cast – especially three-time Helpmann Award winner Mitchell Butel as Shylock – who have lived with these characters for the past four months.

‘One of the things I thought a lot about [at opening night] was how having to go on stage and do the very opposite of what you believe politically is very wearing on those actors. To sit inside that darkness – or for Mitchell, to be so constantly ostracised – as an actor, that wears on you emotionally, I think … So I’m in awe of the generosity of the fact that they do that. But I’m also really proud of them. They’re a very tight ensemble,’ she said.

A key approach to Sarks’ production of The Merchant of Venice has been to highlight the work’s casual racism, including the litany of anti-Semitic slurs that have shaped, or misshapen, Shylock over the many years of his life.

‘Making this work, I knew I had to put a very clear framework around it in order to ask the right questions. Because my greatest anxiety … was that if that wasn’t placed correctly, if I didn’t get that framework right, I might actually just be perpetuating some of those ideas on stage,’ she said.

Learn more about Bell Shakespeare’s The Merchant of Venice

Judging from audiences reactions – including intense foyer conversations around the country after each performance – and glowing reviews, Sarks has got that framework right. Such responses echo Sarks’ original reasons for taking on The Merchant of Venice, a play best known for Shylock’s impassioned ‘If you prick us, do we not bleed?’ speech in Act 3.

‘One of the things that is most exciting about The Merchant of Venice in its purest, classic original form is that empathy speech that Shakespeare has given it. He was doing something quite extraordinary when he wrote that. He was asking people to think again about a culture, about a race of people they’d never met, that many of them had never even seen,’ she said.

‘There’s something really exciting about fast-forwarding all the way to now and being reminded of that question but also having the opportunity to think “Well, have we come far enough in that time?”. And I guess for me, reading the play and looking at that speech, it felt like no, we absolutely have not.’

Such aspects of the play resonate strongly across the centuries, and Sarks hopes they will spark conversation and reflection.

‘I think the experience of the show for people is that it is sometimes unsettling and difficult, and I think that’s not a bad thing … because in a way those kinds of experiences are what makes change possible, or at least allows further reflection,’ she said.

Attending the production’s recent opening night in Sydney, Sarks – perhaps like many in the audience – saw something new in it, even after the months she has spent reading and directing The Merchant of Venice.

‘It certainly struck me last night that the play is asking questions about equality … and the question of equality is hanging very thickly in the air, it’s very resonant in this country right now, and the marriage equality question is just one question of many that we need to ask ourselves, in my opinion.’

Bell Shakespeare’s The Merchant of Venice is now playing at the Sydney Opera House, the Playhouse, until Sunday 26 November. Visit www.bellshakespeare.com.au for booking details.