Reconnecting with community through song

A celebration of exquisite voices and the uplifting power of song, Festival of Voices features choirs from across Australia and sing-along events for those more used to performing at home.
Richard Watts 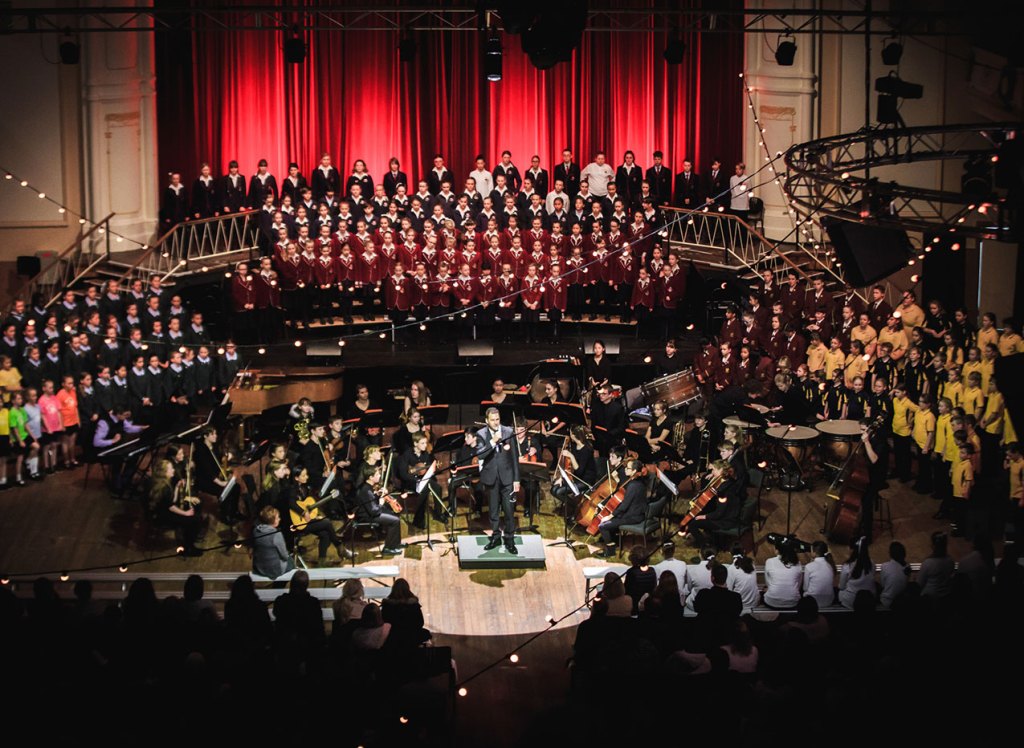 The Big Sing at Festival of Voices. Photo: Phil Kit.

For thousands of years, people have gathered together in the bleak midwinter to raise their voices in song, joining together in ceremony and harmony to drive away the dark.

Such traditions continue in modern times thanks to Tasmania’s Festival of Voices – a more secular but no less fundamental expression of our shared humanity.

‘Our festival has become somewhat of a pilgrimage for a lot of choirs; we get a lot of repeat participants every year or every second year,’ said Festival Director Peter Choraziak.

First held in 2005, Festival of Voices is a celebration of singing in all its forms, from community choirs and professional ensembles through to touring artists from Australia and abroad.

‘We’ve got some exquisite performances scheduled for this year but those artists will be rubbing shoulders with people who are singing in a community choir for the very first time,’ Choraziak said.

‘What we like to offer is a very safe place and a respectful place for people to come and sing. Our remit is to encourage people to sing – and singing is such a therapeutic thing to do, and such a great thing to do for our health and wellbeing.’

The need to reconnect with friends through music after long months of border closures and isolation is almost palpable at the moment, Choraziak continued.

‘Singers just want to sing, choirs just want to get back together again. The whole idea of online choirs wore pretty thin pretty quickly because there’s no human contact. And that’s what it’s all about for singers: to be able to connect with people and feed off each other. Harmony is all about singing together in close proximity to each other, after all,’ he said.

As well as a diverse program of workshops and professional development opportunities for choral singers and choirs, Festival of Voices also features numerous concerts and performances, with guests this year including singer-songwriter Lior and the challenging-to-classy Mikelangelo & The Black Sea Gentlemen performing songs inspired by their album, After the Flood.

‘They’re going to adapt After the Flood, which is an album celebrating migrant workers who worked on the Snowy Mountains scheme in particular. And they’ll adapt that to reflect stories of Tasmania’s hydro schemes. Similar stories – postwar immigrants coming together; people from countries that were previously combatants in the war, who came together and worked together and even marched together at Anzac Day parades. There’s some lovely stories and songs to come out of that,’ Choraziak explained.

Returning event The Tasmanian Songbook is sure to be another festival highlight, a celebration of songs and stories about Tasmania, from its First Peoples through to the convict era, and the more recent tradition of protest songs.

‘The accolades that we received last year really encouraged us to do this again, and expand the songbook and look for those songs throughout history – and emerging songs –that really say something about Tasmania and celebrate songwriters present and past.’

Elsewhere the program features Johannes Fritzsch conducting the Tasmanian Symphony Orchestra and The Australian Voices in a special performance of the Mozart Requiem Recomposed; a panel discussion exploring the state of contemporary choral composition in Australia today; and a sing-along concert celebrating the best of music theatre.

As well as the now-traditional Big Sing Bonfire in Hobart (with some small adjustments to ensure the event is COVID-safe) this year’s Festival of Voices is expanding its program to locations across Tasmania, including Devonport and Launceston in the north and Spring Bay on the east coast, sharing the joy of singing throughout the state.

‘It’s well documented that communities that sing and dance together stay together,’ Choraziak observed. ‘And this year’s Festival promises to be something for everyone, in more places in the state than we’ve traditionally been to before.’

Tickets for Festival of Voices 2022 are now on sale. Learn more about the Festival’s program, workshops and choir packages.