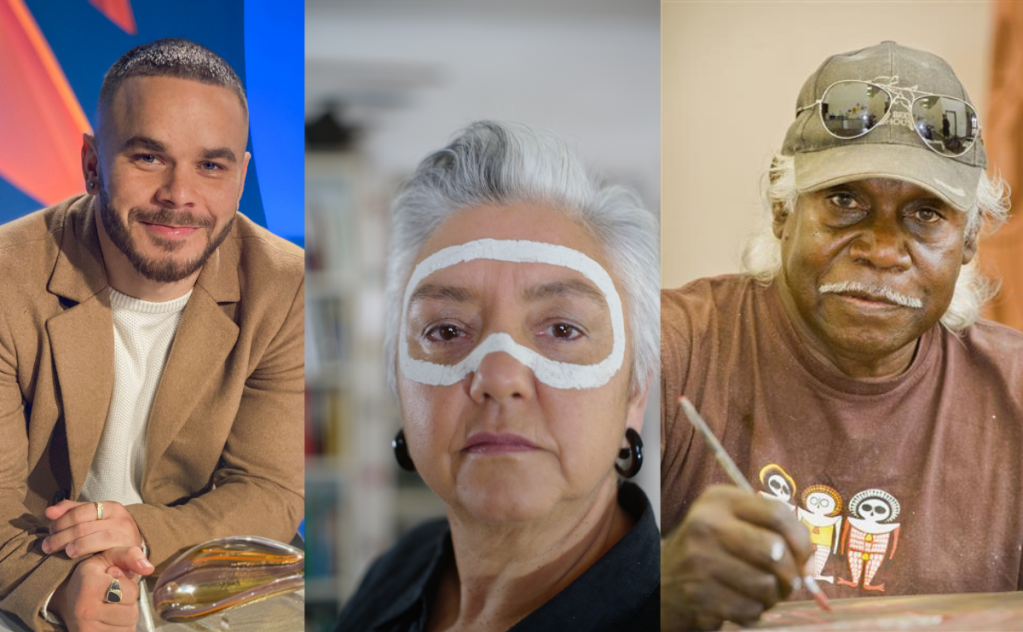 Recognising the excellence of First Nations artists nationally, the Australia Council for the Arts is now calling for applications and nominations for the 2022 First Nations Arts Awards.

Originally known as the National Indigenous Arts Awards, the awards highlight the remarkable work and achievements of First Nations artists across all artforms.

The Australia Council’s Franchesca Cubillo, Executive Director, First Nations Arts and Culture, says much has changed since the awards were first presented in 1993.

‘The Red Ochre Award for lifetime achievement, which really was the very beginning of celebrating the First Nations Arts Awards, began way back in 1993. And when you think about perceptions of Aboriginal and Torres Strait Islander art in the early ‘90s, compared to the way in which we celebrate First Nations arts globally today, I think it shows why it is so important to stop and reflect on First Nations’ achievements,’ said Cubillo, a proud Yanuwa, Larrakia, Bardi, and Wardaman woman.

The First Nations Arts Awards are important for all Australians, Indigenous and non-Indigenous alike, she continued.

‘They allow us as a nation to really position ourselves and show what is unique to this country, a uniqueness that dates back tens of thousands of years; something that defines us within a global community in a way that I believe nothing else does.’

Nominations for the Red Ochre Awards, recognising lifetime achievement in the arts, are accepted from arts and community organisations and individuals.

Nominations and applications for all First Nations Arts Awards close on 12 October.

‘Indigenous and non-Indigenous people can nominate and bring to Council’s attention their peers or those First Nations people who work within their communities or work within their sector. You can put forward their names for consideration and it’s something that I believe we all as Australians can really get behind and celebrate nationally,’ Cubillo said.

Nominations will be considered by the First Nations Arts Strategy panel, with the successful recipients announced on 27 May, the start of National Reconciliation Week.

‘This year, as well as last year, we’ve partnered with NITV (National Indigenous Television) and we will be showcasing the winners on NITV on the 27th of May, which coincides of course with the 1967 referendum, an important day within First Nations communities. And it is really an opportunity to celebrate, to acknowledge and to reflect on the remarkable achievements of our First Nations artists,’ said Cubillo.

‘[The First Nations Arts Awards] allow us as a nation to really position ourselves and show what is unique to this country, a uniqueness that dates back tens of thousands of years.’

The 2022 First Nations Arts Awards  will increase the number of recipients honoured, with two Dreaming Awards and two First Nations Emerging Career Development Awards presented, instead of one honouree in each of the two categories, as was the case in previous years.

‘It was important for us to recognise that within our community, both men and women play such an important role in ensuring our arts and culture is celebrated and transferred to the next generation,’ Cubillo said.

‘So it’s about cultural gender equity, but it’s also to ensure that in terms of that next generation, we can look to the males, the females, the young emerging artists, but equally we are very mindful of including our non-binary First Nations people as well. It just allows for more inclusive opportunities to celebrate artistic excellence,’ she explained.

‘These art awards allow Australia to really understand the rich and beautiful and complex history of Aboriginal and Torres Strait Islander people right across Australia. It’s something that we are very proud of – our remarkable artists, leaders and our remarkable cultural ambassadors – and a chance to celebrate their achievements. We don’t often stop and reflect and celebrate, and these awards allow us to do so. They allow us to tell this story, not only on a local platform, but on a national and international platform today.’

Submit your nominations for the 2022 First Nations Arts Awards by Tuesday 12 October 2021.