Through a groundbreaking exhibition, The Lock-Up is helping change the way lawyers and the public understand the victim’s experience of injustice.
Gina Fairley
[This is archived content and may not display in the originally intended format.] 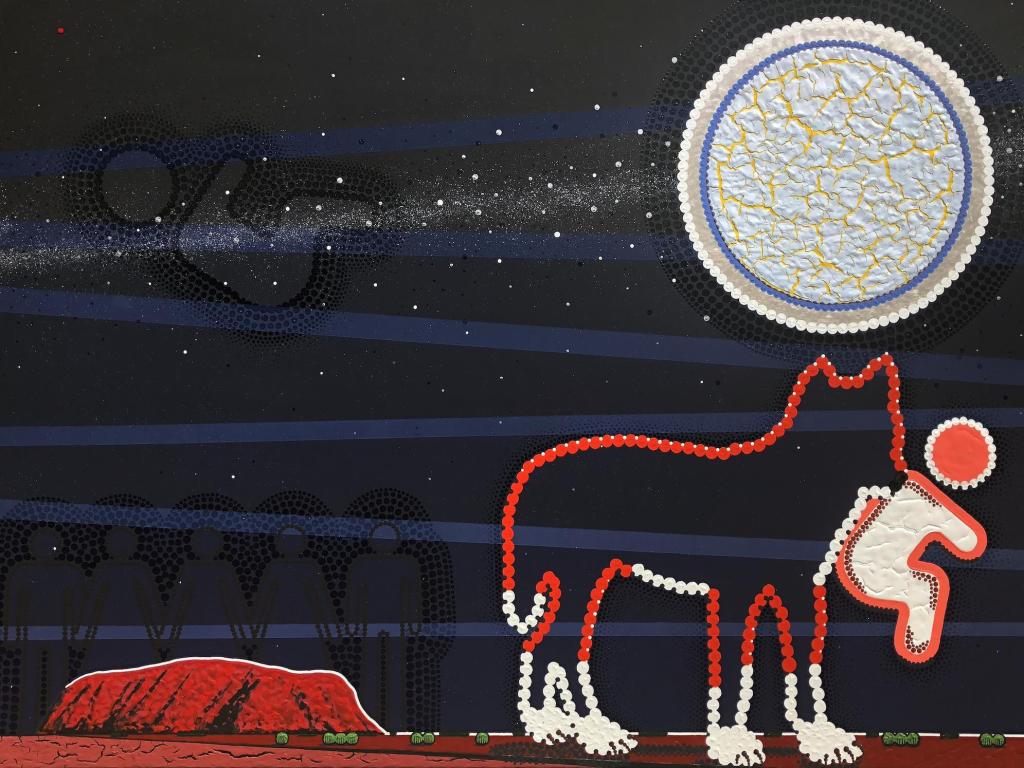 Blak Douglas, A dog’s breakfast (2017), courtesy the artist and The Lock-Up

A lawyer-led art initiative is not what you would expect to find in an independent contemporary art space. justiceINjustice is a new exhibition at Newcastle’s The Lock-Up, which brings together seven artists and three lawyers in order to rethink and reposition several high-profile public interest cases. In each case, the underlying issue is one of injustice and marginalisation.

The Lock-Up’s Director and justiceINjustice Creative Producer Jessi England told ArtsHub: ‘Our vision is to show works in our program that are politically and socially engaged. As an independent space we are really free to speak in this way.’

justiceINjustice opens at The Lock-Up on 23 March. It has been developed with lawyers Karen Wells, Ray Watterson and Robert Cavanagh.

The exhibition came about as a result of the 2016 collaborative project The Most Gaoled Race on Earth examining Indigenous incarceration and black deaths in custody, England explained.

‘The artists Blak Douglas and Adam Geczy, could not get any other Australian institution to present this work, so we did. A couple of lawyers saw that exhibition who worked on the case surrounding Eddie Murray’s death, and they were profoundly affected by how art could speak about this case and talk in a different language and affect people.’

It was these lawyers who came to England with the idea of an exhibition based on other cases they had worked on. ‘They saw we were committed to this kind of work,’ she added.

Two of the lawyers – Cavanagh and Watterson – were part of the co-founding team behind the internationally acclaimed University of Newcastle Legal Centre, where they worked from the late 1980’s until the early 2000’s. The majority of cases in justiceINjustice are drawn from that time.

Art that explores criminal cases is far from a new genre, but what is different about this exhibition is the way the lawyers worked closely with the participating artists, bringing ‘their notes, their personal perspectives, introductions to family members,’ England explained.

‘There has been such a level of trust that these lawyers have placed in us and the artists,’ she added.

Collectively, the cases explore whether justice has been met and describe experiences of marginalisation, such as mental health, cultural difference, economic disadvantage and wrongful detention – cases that speak directly to the human condition and the concept of injustice.

As the gallery reminds us, ‘those seeking justice all too often find injustice, especially for those on the margins. For those who are poor, with a disability, of a minority, justice is all too often illusive.’

One of the participating artists is Rob Cleworth, who has worked on the case of Roni Levi – featured just last week on Four Corners and often referenced when a person suffering from mental illness is shot by the police. Levi’s widow worked with Cleworth to develop his artwork.

Artist Blak Douglas has turned to the Azaria Chamberlain case, and to evidence that was originally dismissed – evidence presented by Aboriginal trackers who said a dingo was responsible for the baby’s disappearance.

‘So this work is about acknowledgment of traditional owners and knowledge, and placing the Aboriginal trackers back into that story,’ said England.

The only case in the exhibition that is still active, and perhaps the most controversial, is that of Kathleen Folbigg, who has been incarcerated for the murder of her four babies. Folbigg has written a letter to the artist, Lezlie Tilley, and made her complete, unabridged diaries available for this exhibition, explained England. This case is likely to come back into the spotlight as lawyers are currently seeking a review of the case.

Other cases include the story of Cornelia Rau who was unlawfully detained by the Department of Immigration, and the death in custody of a young Aboriginal man, Eddie Russell, who suffered from a mental illness. At a local level, artist Leah Emery has respond to the unsolved cases of missing Newcastle women Leanne Goodall, Robyn Hickie and Amanda Robinson.

To complement the exhibition, a panel discussion in partnership with Newcastle Writers Festival will take place on Saturday 7 April, while Friday 18 May sees the symposium, Art & Law: Putting Justice into Practice in partnership with the University of Newcastle Law School and Legal Centre. There will also be an evening of music and songs exploring injustice on Sunday 6 May. For more information on the events and to book visit http://www.thelockup.org.au/whats-on/justiceinjustice

Justice is about education

England said that the University of Newcastle Law School are going to embed the exhibition in first year assessments this year. They are also looking at ongoing documentation of the show so that it can be a case study for students, providing new ways for lawyers to see and consider cases.

‘Art and contemporary art practice has an incredible capacity to speak to audiences in a variety of ways, and to really speak to issues that as human beings touch us beyond the realms of the media, outside of how we normally process information. This exhibition is about responding on a deeply human level. It is something that The Lock-Up is building a strong reputation for nationally and internationally – yes internationally. Our program has an international reach despite our location,’ she said.

While there is an increased interest from audiences for exhibitions of this kind, the politics around organisations and funding has increasingly informed what has come into the public arena.

‘There was a shift where institutions became ultra-conservative for a long time. I think we are emerging out of that, but at the same time there are some serious threats to artists and major organisations presenting ideas that are critical of the current political landscape,’ England concluded.

justiceINjustice is showing at The Lock-Up, Newcastle (NSW) from 24 March – 20 May. Newcastle is located just over an two hour’s drive from Sydney.

All cases have been included with the knowledge or permission of clients and/ or their family members wherever possible.

Visit The Lock-Up for details.