The Byron Writers Festival returns at a new venue for three days of storytelling, conversations and community healing.
Thuy On 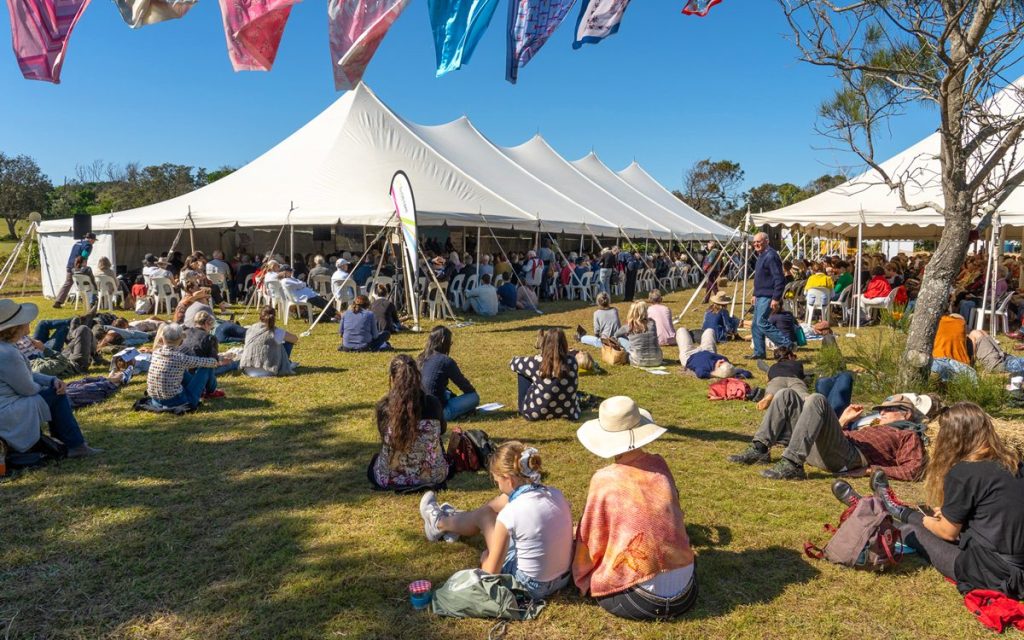 ‘I call it the Glastonbury of writers festivals because it happens in a beautiful outdoor setting across five marquees’ says Artistic Director Zoe Pollock about the Byron Writers Festival, which returns for its 26th iteration on 26-28 August at a new site, the North Byron Parklands. The point of difference with Byron, as Pollock told ArtsHub, is that unlike other single-ticketed literary festivals, this one offers day or weekend passes, ‘which enables us as programmers to take risks, because our audiences have the freedom to wander between the marquees and listen to whoever they find interesting. They don’t have to stay for an entire session.

‘Obviously, we’ve got a fixed program of close to 100 panels and conversations across all genres that you can choose from. But year after year we hear from audiences that their favourite sessions are those they stumbled across unexpectedly, so it’s often the hidden gems in the program that have the most impact on you!’

Scattered around the marquees will be artisan markets and food offerings to feed and water visitors. Pollock pointed out that the site is where the music event Splendour in the Grass occurs too, ‘It’s got a beautiful, relaxed feel as it’s set in a big open field. All you can see around you are rolling grassy hills and coastal bushland, so it’s a stunning setting.’

Though she’s not at liberty yet to release any names, Pollock promises that there will be a solid mix of both well known, loved authors and emerging ones. ‘That’s a big part of what writers festivals are about, introducing new authors to new readers, and the Byron model does that beautifully because people can go wandering to listen to someone that they don’t know and maybe discover new authors.’

Also on the agenda of Byron Writers Festival 2022 is a focus on First Nations voices. ‘A key artistic priority area for me is in ensuring that we feature a really strong Indigenous voice. I’m really looking forward to working with local First Nations authors and storytellers to create a program that celebrates not just First Nations authors from across the country, but also local storytelling.’ she said.

‘Writers festivals traditionally have always been about written, published books. More recently, we’ve seen them evolve to include spoken word artists and a range of other types of storytellers. Here in Australia, our emphasis in the arts and cultural sector needs to be on ensuring those First Nations voices are front and centre. And it makes sense in a festival like this, which is so embedded in place that it reflects those local First Nation voices, the Bundjalung people.’

The newly-appointed Artistic Director also spoke about the effect of the recent flooding on the northern coastal area of NSW. Though she is assuring that the Festival site itself will be fine come August, Pollock added: ‘One of the things that the floods got me thinking about is the role of writers festivals and arts and cultural organisations with regard to healing community from experiences like these. Unfortunately these weather events are going to be more frequent with the effects of climate change so I think a big part of what we need to be thinking about is the role arts and cultural festivals play in reconnecting communities, and healing trauma through storytelling.’

Byron Writers Festival 2022 Early Bird 3-Day Passes will be on sale for one week only from June 15 and general release tickets will go on sale when the full program is announced on July 13.

For more information about the Byron Writers Festival in 26-28 August 2022.