The Masters of Art in Public Space at RMIT is a unique program attuning artists with the potential of art in the world.
Celina Lei 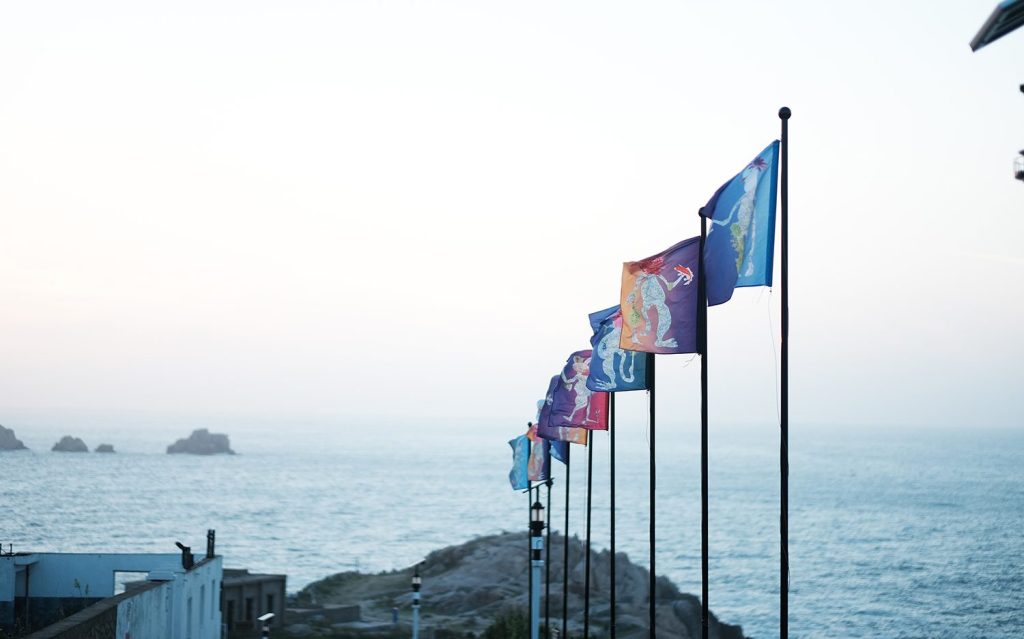 Artists have a role in shaping perceptions of ‘public’. Image: Clara Chan, Children of the Compost Symbionts, Huaniao Island International Arts Festival, China 2021. Work as part of the Master of Arts (Art in Public Space).

In a post-pandemic world reconciling with colonial pasts, artists play a critical role in constituting the narratives and structures of public spaces.

RMIT’s Master of Arts (Art in Public Space) is a specialist course designed to channel such critical discussions, which are always in flux with the changing nature of our social and cultural fabric. It will transform your practice as you make your mark in public space.

Dr Fiona Hillary, the Masters’ Program Manager, told ArtsHub: ‘I think artists have the capacity to tell alternative stories of sites through practices that attune them to the space and assist us all to understand our entanglements in the public realm.’

‘As we emerge back into the world, it’s really interesting to look at how artists engage with public space and really reconstitute what “public” is. ‘We’re not just seeing public spaces as a backdrop to our lives. Actually, we are understanding our enmeshed and entangled relationships,’ she said.

The two-year course at RMIT is designed to be interdisciplinary and supports candidates from their chosen fields of practice, ranging from visual arts, new media and digital arts to performance, social and curatorial practices.

‘The course really invites students to explore the fabric of life and create stories of sites  that offer alternative readings or new understandings,’ Hillary said.

‘I think it’s really that tugging at the fabric of life and constantly interrogating our relationship to what public is.’

Hillary invites potential students to not only think about the formally curated city, but also a vibrant lived city which includes communities and the broader environment.

‘There’s a quote that I love to use by Patricia Phillips, an American curator from the 80s,’ Hillary shared. ‘She says that public art is not public just because it’s out of doors or in some identifiable city civic space, or because it’s something that almost everyone can apprehend – it’s public because it’s a manifestation of activities and strategies that take the idea of public as the genesis and subject for analysis.’

Our views of public space have shifted during the pandemic, she continued. ‘Understanding the digital realm as a public space and the nuances of engaging through digital technologies really came to the fore and still echo through our online 2021 graduate exhibition.

‘[Your work] might be something speculative and fictional or something that reflects on a very real current issue – there’s a broad range of ways artists engage in the public realm,’ Hillary said.

WHY A POSTGRADUATE DEGREE?

RMIT’s Master of Arts (Art in Public Space) includes a focus on preparing arts practitioners for work in the context of public space.

Because of the complex nature of public stakeholders, Hillary said ‘working with artists to understand that kind of network of community is really critical for their success as artists and for their dream to be working in the public realm.’

The course familiarises students with ‘people that have some kind of jurisdiction or investment in the public realm, including local and state government authorities, infrastructure organisations, and arts organisations that are engaged with public spaces and the city,’ Hillary said. ‘Through the course we work closely with key industry partners on real world projects. For example, we have previously worked on projects with the City of Melbourne, Hume City Council, Melbourne Water, the Centre for Projection Art and Heide Museum of Modern Art.’

‘[It’s about] how you can articulate your creative practice within all those relationships.’

Teaching ranges from translating a creative idea to a temporary or permanent public art work, through to negotiating the intricacies of occupying a space and the administrative procedures involved.

Even during physical isolation, students were connected with others from RMIT’s Masters suite, including candidates from the Masters of Fine Art, the Masters of Photography, and Masters of Art Management.

In addition, RMIT has established an international alliance of universities that teach similar Masters degrees, including London Metropolitan University and Fontys University, in order to further facilitate a global network for the candidates.

‘It was a really interesting time to be thinking about public art and public space within the context of the pandemic, particularly in Victoria,’ Russell said.

‘The program was quite pivotal for me, to use one of the buzzwords for the last little while … It was really crucial in reframing the way that I work and allowing me to move away from a work-based producer context to think about my practice in more of a curatorial artistic context.’

The breadth of work Russell embarked upon during the Masters became fundamental to her career, and she continues to be inspired by it.

Moving from Melbourne to Geelong – a city with a very different arts community and landscape – Russell said the program ‘helped me foster new conversations and provocations in a regional setting. I was interested in asking the City, the Council, and arts and culture staff to find ways to connect and potentially work together as well.

‘So many people think public art is those bronze statues and sculptures,’ she continued, ‘but I think the program really showed that broadened understanding of what public art could be – that it can be framed as activism and social practice art, or it can be a more discursive kind of practice.

‘All of those smaller scale or large scale interventions are wrapped up within that public art umbrella,’ she said.

Another important aspect of the Masters is thinking beyond the gallery and museum space, which can be quite daunting for students who lack experience in the public sector.

Russell explained: ‘You’re responding to quite a fixed audience when working within the institution model and a set of stakeholders, but when you’re working in the public realm, it’s just exploded really – everybody is a stakeholder.

‘It forces you to be thinking quite rigorously about what you’re developing because it’s much more of an open conversation when it’s placed in that public context.’

She added: ‘More and more, artists are being invited into these conversations at the design stages, instead of just at the very end to “beautify” the space.’

That’s why it’s crucial to inform artists who wish to work in this realm with the knowledge that will allow them to thrive.