Celebrating the winners of the Australia Council Awards 2021

This year’s Australia Council Awards celebrate an iconic First Nations artist, a doyenne of circus, and a writer known for his fascination with Australia’s diversity.
George Dunford 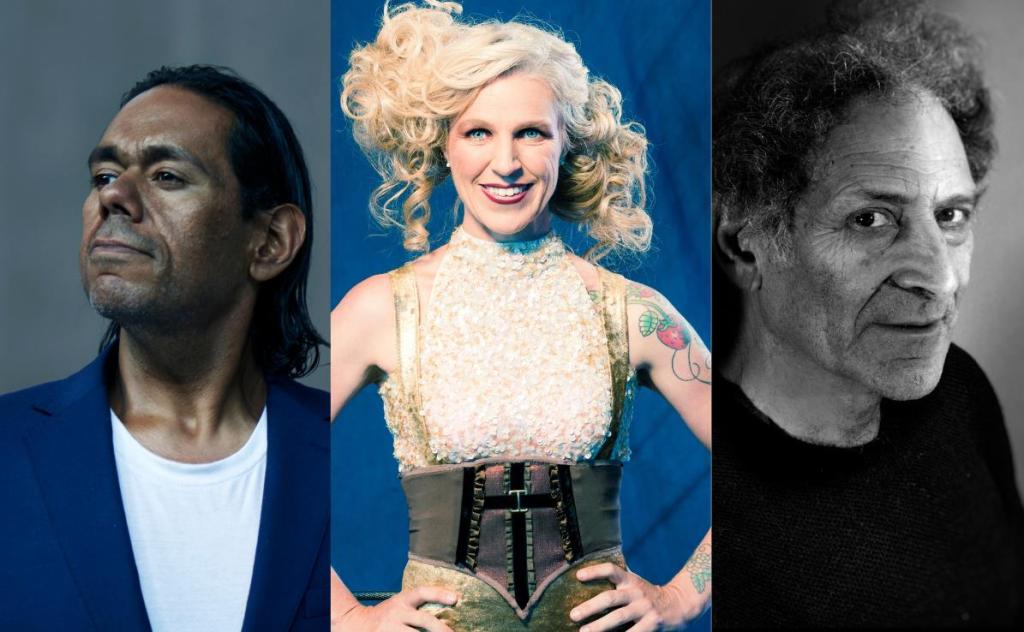 For over two decades, the Australia Council Awards have shone a light on the best of the nation’s arts sector and this year is no exception. In 2021 the Don Banks Music Award goes to William Barton, an acclaimed yidaki (or didgeridoo) player known for entwining his culture with classical music tropes.

Established in 1984 and named for a former chair of the Australia Council, the Don Banks Award is awarded once in an artist’s lifetime, previously recognising the achievements of Larry Sitsky, David Bridie and most recently, Deborah Conway.

Writer Arnold Zable joins legends such as Helen Garner and David Malouf in receiving the Lifetime Achievement in Literature Award. Known for his habit of writing in cafés, Zable’s works such as Café Scheherazade examine how cuisine embodies and merges cultures.

For Chelsea McGuffin, a pioneer of circus arts, receiving the award for theatre is a significant recognition of the power of the artform, which she says can be seen as a side art form. McGuffin’s work spans Circus Oz, the Flying Fruit Fly Circus and all-women group Extra Bimbo.

All of the winners were announced in a virtual ceremony hosted by Australia Council CEO Adrian Collette. Along with individual artist profiles on our social channels this week, ArtsHub is proud to proud to present the full video of awards ceremony below:

Meet all the winners of the Australia Council Awards.

As with many cultural presentations over the past 12 months, this year we are delivering the Australia Council Awards online. While it’s encouraging to see more of our artists, creative workers and audiences returning to physical venues. We’re also mindful of the ongoing risk of disruption caused by COVID-19. Hopefully we can get together again in person next year.

This year, we are honouring each of our eight 2021 recipients across the art forms, through a series of individual videos that we’re rolling out over the coming days. As well as a feast of visual imagery, these presentations feature fascinating conversations between each recipient and another luminary of their field, often an alumnus of the award itself.

I am now absolutely delighted to announce the 2021 Australia Council Award recipients and give you a taste of what will be in store over the next few days. The Australia Council Don Banks Music Award acknowledges a distinguished artist who has made an outstanding and sustained contribution to Australia’s musical culture. It is named in honour of Don Banks, acclaimed Australian composer, performer and the first chair of council’s music board.

The award is considered one of the nation’s most valuable individual music prizes. It is granted only once in an artist’s lifetime, and the list of former recipients is testament to the depth and breadth of Australian music. Our 2021 recipient of the Australia Council Don Banks Music Award is William Barton.

William Barton: The music, that I guess was implanted within my soul, came from Mum playing classical music to me as a child and before I was born. And the didgeridoo and my culture, the yidaki and, you know, my uncle, Uncle Arthur Peterson, would play the yidaki the didgeridoo with mum as well. And so I sort took over that role shortly after my uncle died. I wanted to be a part of that mystery, that mystery of when I heard that sound of this ancient instrument, how powerful it was.

Cat Jones: Growing up, we were often surrounded by art and performance, so it was a pretty natural progression. I mean, I’m insatiably curious. So the thing that I love most is about finding new ways of thinking and create a world where something different is possible.

Arnold Zable: I think yes, I think at the heart of literature is empathy and compassion and and putting yourself in other people’s shoes and seeing it through their eyes. And it becomes a great pleasure to, to do this.

I write a lot in cafes, because I like the sense of humanity around me of being connected. So, yes, I think it’s at the heart of what it is to be a writer and a storyteller. If someone asked me what’s, what’s the most important thing about being a writer, I would say it’s, you have to be alert and you have to be a good listener. To be a storyteller, first, you have to be a good listener, so to get back to the heart of it, which is conversation, really its conversation and being alert.

Chelsea McGuffin: Circus is, it can feel like a bit of a side art form sometimes. So the fact that it’s, that I’ve been recognised in that field, yeah, it’s great to be acknowledged and feel like, you know, people are seeing and hearing and understanding.

Adrian Collette: In Australia we have a vibrant and strong culture of dance, whether First Nations, classical or contemporary. In this context, I’m delighted to announce Sue Healey receives the 2021 Australia Council Award for Dance.

Jeff Khan: What can dance on screen do for you that it can’t do in a live performance?

Sue Healey: It enables me to manipulate space in ways that is impossible in a theatre. To get much closer to the action, so the close-up, to show that to an audience, which is something that is normally not visible in a theatre. In fact, the edit has become choreography for me.

Adrian Collette: The Australia Council Kirk Robson Award for Community Arts and Cultural Development recognises outstanding leadership from a young artist or arts professional. It was established to honour the memory of Kirk Robson, a significant young leader in the sector who passed away at a tragically young age. His work was focussed on justice for all and compassion for the marginalised.

Our 2021 recipient demonstrates outstanding leadership within the community, arts and cultural development and the wider arts sector. And we are delighted to recognise her exceptional capacity in this way. Congratulations, Mama Alto. 2021 Australia Council Kirk Robson Award for Community Arts and Cultural Development recipient.

Adrian Collette: The Australia Council Ros Bower Award for Community Arts and Cultural Development was established to honour Ros Bower; a journalist, television producer, community arts pioneer and founding director of the Australia Council’s First Community Arts Board. It is awarded to an artist with a proven record of high achievement in community arts and cultural development, with an emphasis on the principles of equality, respect and diversity. Qualities which are indeed characterised by our 2021 recipient Marianne Wobcke.

Marianne Wobcke: The Stolen Generation and the trauma that our Mob have experienced. She had mothered a number of children which were all removed, and I will never forget when we took the belly cast off her, she saw herself as a goddess and it healed something in her that was extraordinary. And I knew I was participating in something sacred and awesome, that transcended anything that I’d experienced in all my years of medical work.

Adrian Collette: The recipient of this year’s Australia Council Award for Visual Arts is a distinguished artist whose place amongst the greats of our visual arts sector is assured. Congratulations, Vivienne Binns OAM.

Julie Ewington: It’s been 60 years of making art, in all of that, is there one memory about this that stands out for you?

Vivienne Binns: I finished art school, that I realised I was very talented, but I didn’t feel that I was an artist and I wanted to find out what it meant for me to feel I was an artist. And so I isolated myself utterly focussed on just finding out what it was for me to be an artist, what art was, and I got there. That was the most memorable point, that breakthrough and the realisations that came with it. The insights that came with that were insights that I’d never experienced before. You know, nothing in my family background or school background had provided me with that. And that was, that’s the most important memory.

Adrian Collette: It is so wonderful to continue our commitment to celebrating these extraordinary artists at this time. The Honourable Paul Fletcher, Minister for Communications, Urban Infrastructure, Cities and the Arts, also offered his congratulations in the following message.

Paul Fletcher: Hello, I’m Paul Fletcher, Arts Minister and I’m really pleased to be able to add my welcome to everybody participating in this year’s digital version of the Australia Council Awards ceremony. These awards are so important to recognise people within Australia’s vibrant arts community, who have made a particular and special contribution.

And it’s an important tradition, over the years recipients have included Betty Churcher and The Flying Fruit Fly Circus, amongst many others. So can I congratulate all of the nominees for the recognition you’ve received in being nominated for an award. And can I say particularly to those who do receive awards, well done on what you’ve achieved and thank you for your contribution to Australia’s artistic scene.

Adrian Collette: Thank you, Minister and thank you all for joining me today for this very important announcement. Keep an eye on our Facebook page or our website over the coming days as we progressively rollout each video feature, you’ll hear from each artist about what these awards mean and see a glimpse of some of their extraordinary achievements. Once again, congratulations to the incredible artists we are honouring this year.