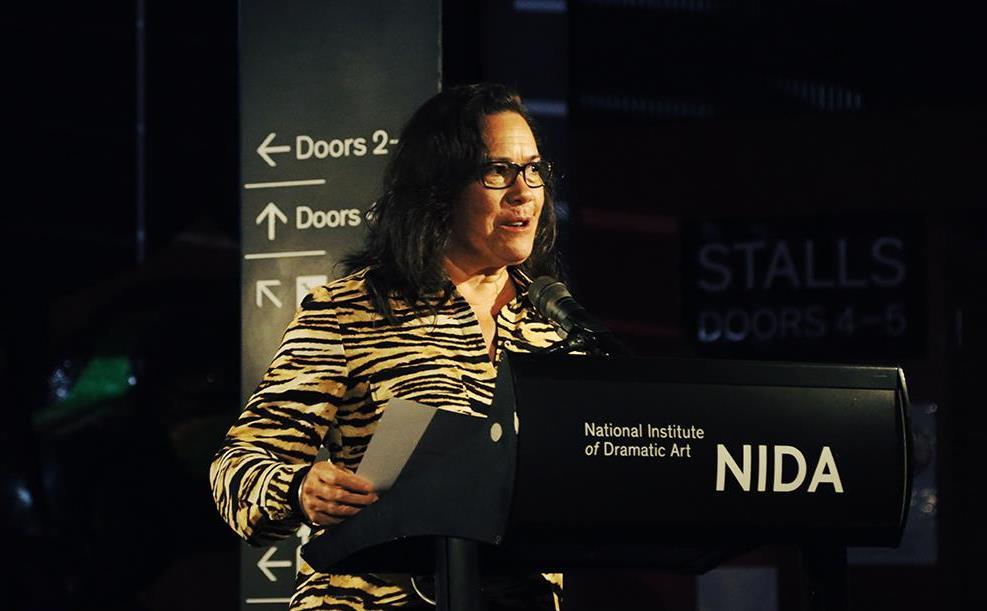 Acclaimed arts leader Marilyn Miller was born to dance. She began dancing at the age of five, taking formal classes in classical ballet whilst learning Aboriginal dance around a campfire at the beach. As a teenager she studied at the Australian Academy of Ballet and gained a place at NAISDA Dance College. She went on to be the sole female co-founder of Australia’s first mainstream Aboriginal Islander Dance Theatre – The Company.

‘We travelled all over Australia and to other parts of the world performing. It brought an awareness that Australia had many different cultural identities before European occupation, each of which had a rich culture and expression in what we now view as the arts,’ said Miller.

‘I thought it was about time I gave myself the kind of attention I had invested in others.’

After a successful career as a dancer and choreographer, Miller moved into arts management. She became  the first Aboriginal or Torres Strait Islander dancer to do a business degree, in 1997, when there were only three Indigenous business students alongside her at the University of Technology, Sydney (UTS).

Miller has been an independent arts consultant and producer for over 30 years and has held numerous high-profile positions in the arts including Chair of the NSW Ministry of the Arts Dance Committee and co-Deputy Chair of Ausdance National. Now she is making the next step in her impressive arts career by undertaking a Master of Fine Arts in Cultural Leadership at NIDA.

‘Most of my career has been about supporting and providing other people with platforms to launch and further their careers. Every professional role I’ve ever had was about empowering and promoting others and their work, most particularly through BlakDance Australia, which I established. In studying the MFA-Cultural Leadership, I thought it was about time I gave myself the kind of attention I had invested in others,’ she said.

Study has a deep synergy

Returning to study 15 years after gaining her Bachelor in Business from UTS has a deep synergy with Miller’s professional pursuits.

‘There is great synthesis between my work and my study at NIDA. I am working on attaining a huge goal which has been in the pipeline for a couple of years and the MFA-Cultural leadership provides the environment to further explore and develop that goal.’

Miller says that being awarded this year’s Luminis Foundation Indigenous Fellowship at NIDA was hugely beneficial. The Fellowship funds 50% of the MFA-Cultural Leadership course fee.

‘The Luminis Fellowship literally allowed me to embark on the MFA; I don’t think I would have been able to do the course without it. The course is structured in block intensives every two months. I need to travel from Cairns to Sydney for each intensive and the Fellowship has made that possible.’

The two-year part-time MFA allows students to integrate their work life with their study program and culminates in an international placement. The MFA is future focused and designed specifically for producers, curators, arts managers, directors and cultural practitioners who aspire to new leadership models.

‘When we think about leadership – empower people; inspire people; shared vision; lead change – we as First Peoples have a gamut of options and avenues to explore, especially if we then consider our bi-cultural existence as well.’

Miller relocated back to Cairns a few years ago, and became the Artistic Associate at the Cairns Indigenous Art Fair, where she is now a board member.

‘I was born and raised in Cairns, with my sister Lydia and brother Michael. My tribes are the Kuku Yalanji, from the rainforests around Mossman, and the Waanji, part of the Kalkadoon nation north of Mount Isa,’ said Miller.

Her parents both had impressive careers too, achieving many firsts for Aboriginal people. Her late father Mick Miller was an influential Aboriginal activist and her mother is retired judge Pat O’Shane OAM who was Australia’s first Aboriginal magistrate. They began their careers as teachers and were the first two Aboriginal teachers appointed to the Queensland school system. Her sister Lydia is Executive Director of the Australia Council’s Aboriginal and Torres Strait Islander Art Board.

Miller says she has always been involved with dance in some way, even whilst exploring other avenues in the arts and cultural sectors. Dance has now taken on a new role in her professional life.

‘I’m working with Granny’s Yarns as a coach and counsellor with children in out-of-home care, as well as single mothers, using dance as my modality.’

And she always keeps an eye on the dance scene with a particular interest in Indigenous dance.

‘It is always refreshing watching the emerging dancers coming into their own. Their stories, their expression of their stories, is exciting and valuable to the arts in Australia as a whole.’

Miller is often invited to attend high-level international arts symposia and is a passionate advocate for First Nations arts practices.

‘There has been a conscientious development for Indigenous dance, particularly through BlakDance Australia, in consolidating the network between Australia, Canada, and New Zealand. I have only recently returned from an international Indigenous performing arts forum in Ottawa, Canada, where we discussed and formulated future goals.’

Applications for the MFA in Cultural Leadership are now closed. For further information on the course, please contact Karilyn Brown, Course Leader on karilyn.brown@nida.edu.au or 02 9697 7645. There’s still time to apply for the 2020 NIDA intake in a range of other courses – apply now.