Brisbane City Council has produced a showcase of contemporary Australian art in Brisbane’s City Botanic Gardens, as part of the Commonwealth Games Event City Festival 2018 celebrations.
Andrea Simpson
[This is archived content and may not display in the originally intended format.] 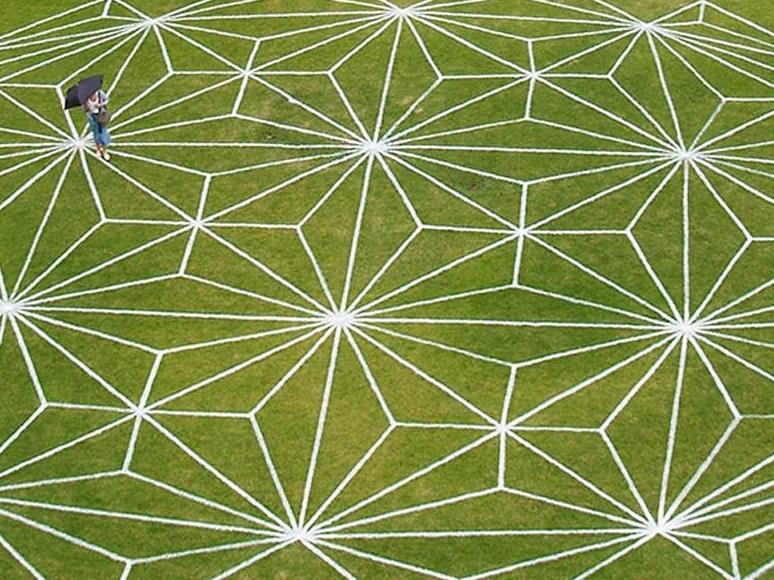 Opening on 6 April and closing on 15 April, the exhibition overlays contemporary thinking with the gardens’ familiar landscapes.

Presented by Festival 2018, produced by Brisbane City Council, and supported by the Queensland Government, Botanica features 16 national and local contemporary artists, each of whom has responded to an area of the gardens from which they take inspiration.

This monumental endeavor will bring modern art to life in a timeless setting, allowing audiences to connect with nature and inviting them to interact with and comment on the art works.

A temporary artwork, Field Drawing number #1 is constructed from geometric lines on grass made using a sports line marking machine. The public is invited to view artist Kerrie Poliness as she draws the large-scale artwork between 1-3pm on Wednesday 4 April on Soundshell Hill in Brisbane’s Botanic gardens.

‘The work is a set of instructions that describe how to make the drawing. The instructions have been designed to be used by people other than myself; park caretakers, gardeners – anybody who is interested, really,’ Poliness said.

Poliness explained that the geometry of the work is such that there is a pattern involved, but no measuring. ‘So every time the work is made it changes in scale and orientation depending on the site and that is determined by the people that make it. It also changes in terms of its internal dynamics because the people who are making it decide how to steer it and can change not the pattern but the dynamics of the geometry.

A light projection that is best viewed after sunset, Monument is a progressive project that generates ‘temporal monuments to everyday individuals who have a strong connection to the site the work occupies,’ explained artist Craig Walsh.

By transforming trees into temporary public monuments, Walsh challenges the concepts and expectations of history and public monuments in civic spaces. Instead of unyielding stone, rigid and immutable, his work suggests history is flexible; it grows and changes over time.

‘This project represents a haunting synergy between the human form, natural environment and the act of viewing. Moving images transform trees into sculptural monuments surveying the immediate environment,’ he said.

Hear Walsh and other Botanica artists discuss their works on Saturday 14 April at Raising awareness: art = environment = transformation, where ideas around public artwork and the experience of environment and place will be discussed in depth.

Artist Leah King-Smith and her partner, Duncan King-Smith, a sculptor and sound artist, were inspired by a grand avenue of fig trees (Ficus benjamina), in the gardens. Their art piece, Singing Place, merges a reflective installation with an enigmatic performance work.

Upon viewing the area, King-Smith said, ‘It’s a grand avenue where a lot of the weddings take place. We thought of the energy of the avenue. It’s where people celebrate their relationship, and that moment of being able to express their love in this space. The idea is about symmetry as well. I wanted to work with the idea of “what is above, so is below”. In the end we chose a few little ideas.’

Along with a large, 3D printed cast of the couple’s hands installed in the space, a live performance will be staged with the help of the Kelvin Grove State College Choir, performing original songs by Duncan King-Smith.

‘Duncan has written songs for many years but we thought, “What would happen if we worked with a choir?” So every Friday we have been going down and working on a repertoire of seven songs [which] we are going to be performing in this avenue. Just one performance,’ King-Smith told ArtsHub.

‘There’s about 50 to 60 singers, which will be quite massive, so Duncan and I will be performing to people in public; we will all be there singing.’ The performance occurs on Friday 13 April at Botanica up-late with extended hours to 10pm.

To learn more about Botanica, Contemporary Art Outside at the Brisbane City Botanic Gardens from 6-15 April, visit: www.brisbane.qld.gov.au/botanica