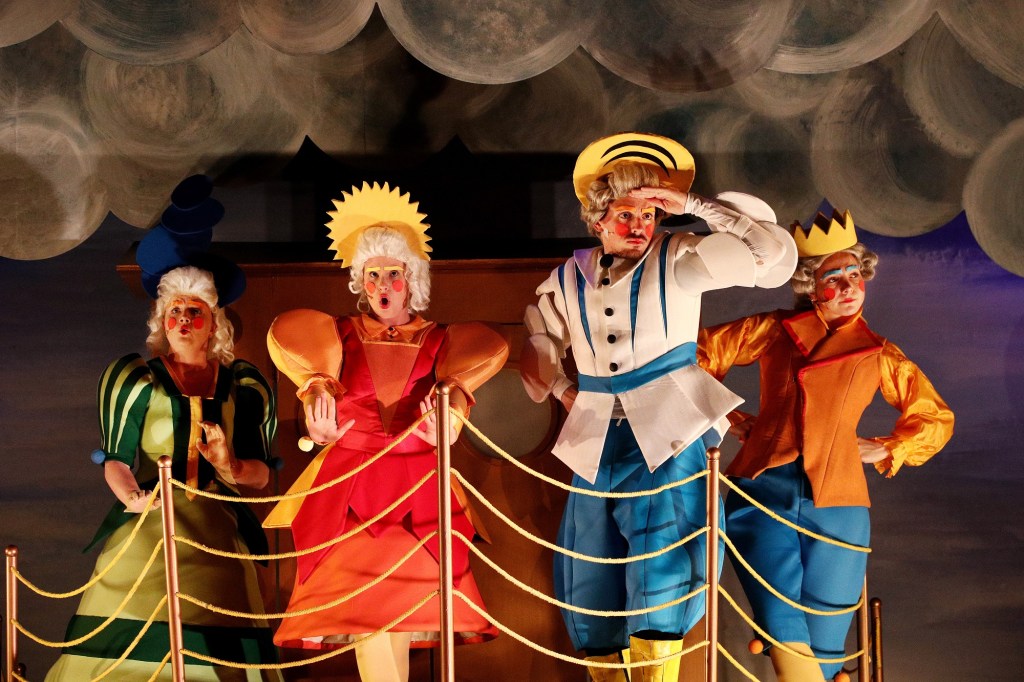 After a year of offstage drama, director and lighting designer Alexander Berlage is relieved to be back in a theatre, where the only major dramas to contend with are scripted.

‘It’s been so interesting to go through this journey – this second lockdown for Sydney, specifically – and then explore the question of how does storytelling, how does theatre-making, how does art transcend what is essentially a worldwide catastrophe?’ Berlage said.

An alumnus of the National Institute of Dramatic Art (NIDA), Berlage has returned to his alma mater to direct Anne Washburn’s darkly comic Mr Burns, a post-electric play, the first production to open NIDA’s End of Year Production Season.

Written as a response to September 11, Mr Burns is a clever and confounding story about the importance of storytelling, and was previously staged at Belvoir in 2017, in a production directed by another NIDA alumna, Imara Savage.

Berlage says he has his NIDA training to thank for allowing him to put his memories of that production to one side.

‘I thought Imara’s production was incredible … but basically you have to forget what you’ve seen and really go straight back to the text. And something I’ve learned from NIDA is to be really true to your instincts, your own voice and your own aesthetic leanings. It’s about trusting your gut and also working with your collaborators to find what the production needs to be here and now,’ he said.

Mr Burns is one of four plays programmed for the End of Year Production Season, alongside a co-production with the Sydney Conservatorium of Music of Benjamin Britten’s operatic take on A Midsummer Night’s Dream, directed by the inventive Kate Gaul; Caryl Churchill’s contemporary masterpiece Love and Information, and God’s Country, a brand new comedy by acclaimed Pakana/Palawa playwright Nathan Maynard, the author of The Season and A Not So Traditional Story.

Collectively, the four plays explore worlds in flux; a fitting theme after the COVID-caused chaos of the last two years.

Berlage, who graduated from NIDA’s Master of Fine Arts (Directing) in 2017 having previously completed NIDA’s Bachelor of Dramatic Art (Production), describes the End of Year Production Season as ‘a beautiful buffet, formalistically’.

‘You’ve got all the forms and all the different genres and styles and aesthetic worlds in there. It’s a smorgasbord,’ he said.

Having spent several years as a student at NIDA, Berlage is delighted to return to work with the institution’s current crop of talented students.

‘It’s such a joy. The first day of rehearsal was also the first day that all the students were allowed back in person in the building after four months, so for all of us, there is this sense of something really special that we’re able to make a show right now,’ he told ArtsHub.

‘I’m also constantly amazed at the skill of all the departments across props, costume, design and the technical courses. It’s amazing that I’m actually working with students, because the quality of work and attention to detail in so many respects is nothing short of extraordinary.’

Since graduating from NIDA in 2017, Berlage has carved out a career as both a director and a lighting designer, a mix of skills that he believes keeps him on his toes artistically.

‘I’m a big believer in the idea that if you do one thing for your entire life, you’ll get bored or you’ll get complacent. So finding different ways to spice things up, to mess up your own practice and work, is really useful both personally, and artistically. And I feel like I’m a better designer for my directing work, and I feel like I’m a better director for my design work. They complement each other,’ he said.

Given the challenges of the last two years, Berlage said he was thrilled to be working with the NIDA students to bring the world of Mr Burns to life, an experience shared with the three other directors working on the End of Year Production Season.

‘As a group of humans, these students have been really interested to look at our collective experiences of pressing ourselves into the unknown and how we cope with that,’ he said.

‘At the end of the day, theatre is about us as audience members feeling empathy for the characters and scenarios and stories on stage. And so, the creation of it should also be about shared empathy as much as possible.’

NIDA’s End of Year Production Season is on now and runs until 11 December. Book tickets here.