With a 300-million-year-old tradition of storytelling turning to the latest light projection technology and youth vernacular, Australians can find renewed connectivity with our desert history at Parrtjima this April.
Gina Fairley 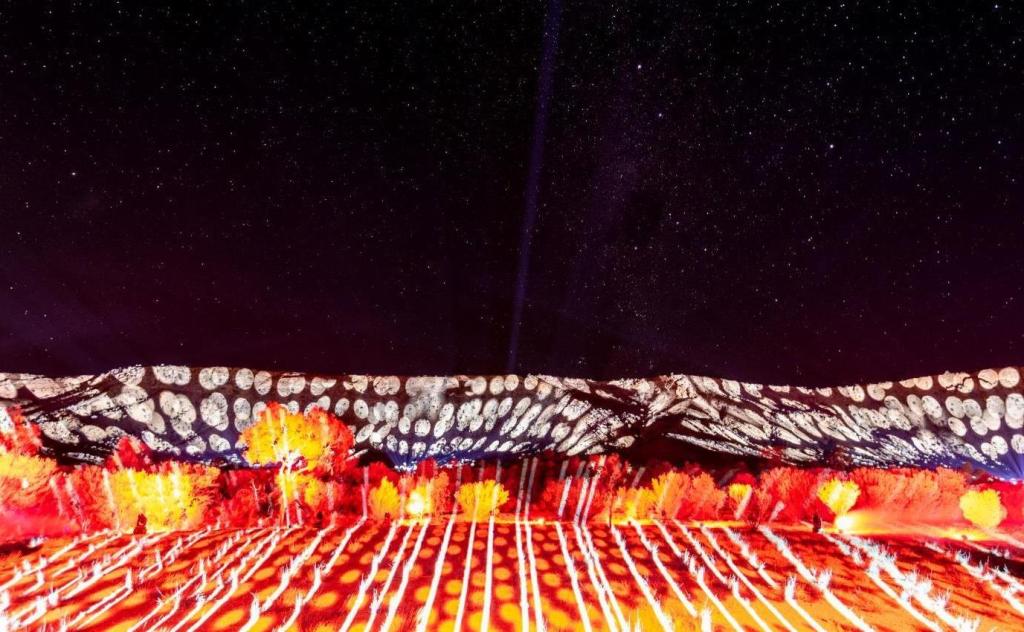 In a year when Australians are turning to domestic tourism, Parrtjima – A Festival in Light will return to Arrernte Country in the Red Centre from 9 – 18 April 2021.

Held on Mparntwe (Alice Springs), Parrtjima is unique in the way it uses the latest lighting technology to celebrate Aboriginal Culture on the MacDonnell Ranges – a fitting 300-million-year-old natural canvas – and project stories and designs onto the desert floor, making us all appreciate the benefits of Australia and its rich cultural history.

The light shows are just part of the picture, with large-scale illuminated sculptures installed at Alice Springs Desert Park, and a full program of events.

Parrtjima Curator, Rhoda Roberts AO, has been part of the team bringing this festival to light now for five years.

‘It is really interesting, even though we had to move the event from April to September last year, we were able to see that its success was about the scale, and the blend [of offerings]. I think we’ve really cemented the event – we know what works and what doesn’t work – and now we can start to look at broadening it. One way we are doing that this year is to look at what young people are doing with cultural expression, hence our theme Future Kultcha,’ explained Roberts.

Roberts reminded us that not one Aboriginal person in community – urban or county – contracted the coronavirus, which ‘says so much about how we manage our communities’.

When COVID-19 restrictions were lifted and the event was eventually staged last September, Roberts said the site lent itself to the ‘new normal’ event.

‘Because of the scale of site, people were not in clusters and easily keeping that 1. 5 metre rule – we have the space to do it! And obviously we had bi-lingual announcements throughout the event. That opened up another dynamic.

‘I think one of the biggest things that surprised me was the visitation – not just because it was a new safe – but the visitation of Australians who really wanted to connect a bit more, and hear that First Nation’s voice,’ she continued.

‘It hit me that it is not just about the light; people want the knowledge and want to get engaged. It’s not an “I feel guilty” action, [rather] it is about going on the exploration with us.’

Her tip on what to see at this year’s festival was the Ranges Show.

‘When people come out to the site, they often forget the Ranges Show, which has a lot of guidance from the local mob. People might see it in the distance, but it really is a show within a show – to sit on the grandstands and be guided through the stories and light shows,’ said Roberts.

WHAT IS FUTURE KULTCHA?

This year’s theme Future Kultcha is based on the timeless oral way of learning, the passing of knowledge from one generation to the next.  But to learn, you also have to understand the listening.  Listen to the elders, custodians and guardians of language. They say:

when you have knowledge you have obligation,

when you have a voice you have freedom,

you have pride and you belong.

‘We thought we would use the vernacular of young people – the way they write on Instagram and social media, and adjust and play with that language … they know their own ways of making it [culture] really relevant in their everyday,’ Roberts said.

She said this year’s theme is about inclusive two-way, side-by-side exchange.  ‘That is the key – when we are in it together,’ Roberts added.

Parrtjima aims to give young and emerging artists a new agency, working side by side with cultural guides, while senior artists and performers pass on their wisdom to the next generation in new ways and forms.

Roberts said: ‘A lot of people think that when you talk about emerging artists across the Australian cultural realm, you are looking at 25-year-olds, but First Nations people might be in their 40s when they start, because of the complexity of the legacy of that particular story they are painting can be passed on, for example.’

A unique aspect of the festival is the Parrtjima Festival Reference Group (PFRG), which underpins the program. ‘When we do the program, and I put those first creative concepts down, it is not just our team and AGB Events, but the community,’ explained Roberts of the Aboriginal-led event.

‘We have developed a layering [model], a bit like a cake. You have the icing; you have the enabling or the recipe, and we bring them the ingredients. After all these years of working in the arts, we have discovered a really great model for an arts festival,’ said Roberts.

AN IMPORTANT ANNIVERSARY FOR DOT PAINTING

‘People see dot painting, of course, as part of the Central Desert – it’s known all around the world. But to stand on the desert floor – on the sand where the original stories and ceremonies were told – will be an amazing moment this year,’ said Roberts.

She continued: ‘When people look at these artworks on canvas they see them as a modern thing, but standing on the Country these incredible artworks have a living history. And now, 50 years on after those first canvases, we can take in the same dreaming stories, put into an installation with technology and light. We walk in their footprints.’

Roberts said that while the look and feel of these stories might have changed, the story has not. ‘It goes back to our theme Future Kultcha, and using the language of the day,’ she said.

WHY MAKE THE JOURNEY TO ALICE?

Roberts says 2021 is a great year for domestic tourism. ‘You’re still going to feel the heat of Bali, but rather than the hot swimming pools, you can visit the cool ancient waterholes of the Centre.

‘This is one of the most ancient deserts in the world, and the newest technology of expression – that is a pilgrimage in itself!’ she added.

‘With Parrtjima you are getting a little slice of all the variants that make up [Aboriginal] culture. It just keeps getting better each year,’ Roberts concluded.

Parrtjima: A Festival in Light will be presented 9 – 18 April 2021 at Alice Springs Desert Park, incorporating the MacDonnell Ranges, and Todd Mall in Mparntwe (Alice Springs).