Make no mistake, Wes Snelling knows how to make you cringe. Deliciously crass, Snelling complements an hilarious array of characters with original music performed by a fantastic live band in his 2009 Comedy Festival offering.
Zoe Rinkel 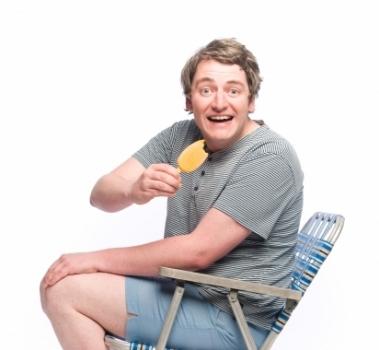 Make no mistake, Wes Snelling knows how to make you cringe. Deliciously crass, Snelling complements an hilarious array of characters with original music performed by a fantastic live band in his 2009 Comedy Festival offering, Kiosk, directed by Paul Horan. Kiosk will take you on the great Australian caravanning holiday – the one you thought you would never have to relive once you left childhood in the ‘burbs behind.

Far from the frisbees and fishing trips, though, is Wes’ own lonely story of the boy behind the counter, the kid who sold you your Redskins and refilled the toilet paper at Kyneton Caravan Park. Wes’ charm is undeniable, the breathless nervousness with which he regales us with his day to day routine is so adorable that I resist the urge to storm the stage and hug the life out of him. I suspect I am not alone, as the crowd melts with every awkward shuffle and naïve observation of his nomadic neighbours, and also of himself.

Wes is questioning his life in Kyneton Caravan Park, and he turns to the one person he thinks might have the wisdom to help him: Sally from Home and Away. After all, she works in a caravan park too, and if anyone can rescue his imagination from being crushed by a tsunami of Four ‘N Twenties and Winnie Blues, it’s her.

As Wes outlines his job description he introduces us to the people he lives to serve, seamlessly transforming himself from one to the other. Snelling’s characters are embarrassingly familiar: the bottom-of-the-barrel fringe dwellers, permanent fixtures at caravan parks nation-wide. From the morbidly obese, chain-smoking single mum barking orders from her permanent position in the slightly-too-snug camp chair, to the has-been, never-was anything but a youthful star who’s lost her major ingredient and fills the void through a continuous stream of cask wine, the secondary figures emerge richly and generously. Snelling belts his way through several original songs in which he reveals the less desirable characteristics of his creations. The flexibility and quality of his voice coupled with witty songs and engaging characters really make Kiosk a hit.

Somewhere along the line, Wes’ own story gets lost, and the link with Sally becomes tenuous and even rather dull (perhaps more a reflection on Sally herself?), but all is forgiven since the quality of Snelling’s other characters is impressive, his collection of on-stage companions so absurdly funny.

As a 2008 Golden Gibbo nominee and a Moosehead Award recipient in 2009, Snelling comes to the festival with an impressive list of credentials. Kiosk is as heart-warming as it is cringe-worthy, and for that it is ultimately a success. For the most part it is well conceived and well written, and it is certainly slick. Melbourne’s Prince of Cabaret retains his place on the throne, even if it is a fold-out one.