How does circus take on death and memory? In collaboration with a hospice for young people, Flipside Circus attempts to look at mortality.
George Dunford
[This is archived content and may not display in the originally intended format.] 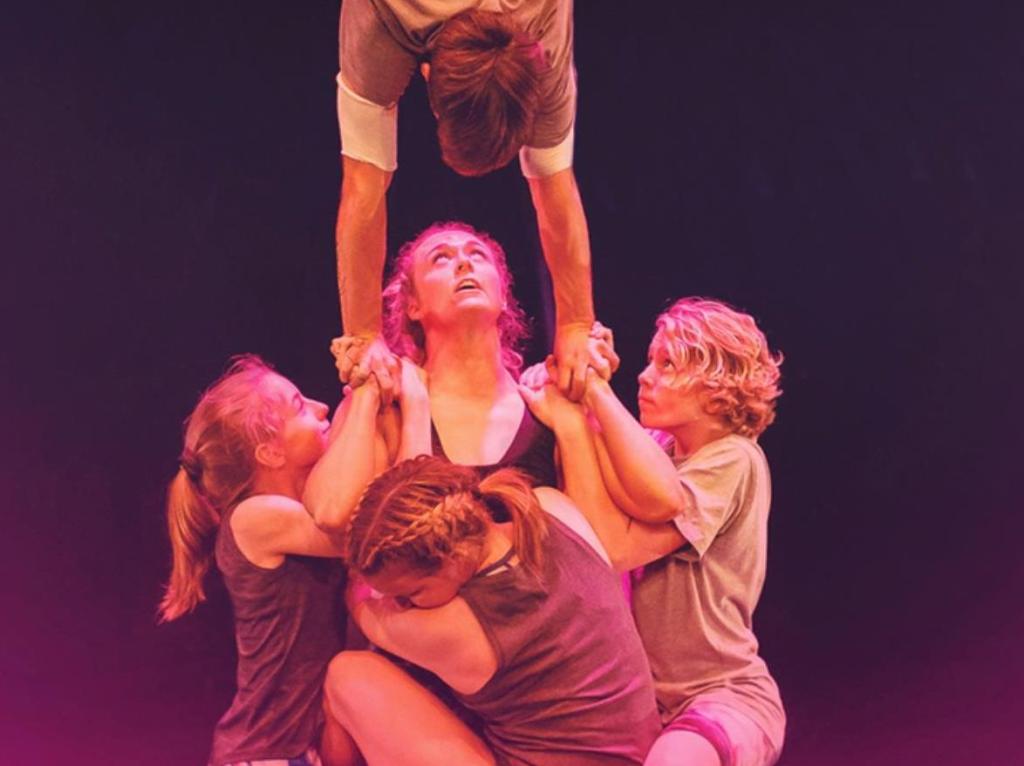 Amy Stuart carries the cast as she simulates the role of a busy mother and medical carer. Image Brisbane Festival.

Contemporary circus has been pushing the boundaries of storytelling in Brisbane for decades. Flipside is a small, ambitious company that aims to make work that confronts big issues. In this production they collaborate with Hummingbird House (Queensland’s only hospice for youth) to reflect the life and death of the residents.

The performance opens on a spare stage set with five purple chairs, a clothesline and suspended poles to either side of the stage. As the production begins, the clothesline’s large sheet is brought to life with projections of clocks that show the passing of time in Hummingbird House – a menacing prospect when that time is limited for many of its residents and families.

The soundtrack forms around the performers, using quotes from families and staff at the centre. The first sequence talks about coming to the house for the first time, interleaving many different voices as the performers liberate a solitary immobile figure from her chair, draw her into acrobatics and balance her movement. They join in tumbles and rolls – the movement a metaphor for how the house draws residents back into life, helps them experience joy again.

The audience is invited into the geography of the house. The kitchen, the cook tells us, is ‘the heart of the house’ and the backyard is a place for families to play again. The backyard sequence is set to Crowded House’s ‘Weather With You’ and sets the play of families in a sun-drenched possible place against the darker moments of the performance. That clothesline is again put to good use – suspending a performer and then serving as tightrope.

The tightrope is a balancing act performed by Skip Walker-Milne showing great concentration as other performers bounce, encircle and try to upset him, just as, according to the audio, the residents of the house have ‘good days and dad days’. The strongest performance comes from Amy Stuart taking on a mother role as the audio intones her impossible morning routine of a mother-turned-nurse.

She walks a circle of that routine as each of her children jump on her as she balances them on her shoulders, carries the weight of them and bears their competing needs. When she is left panting centre stage in the spotlight, the audience feels every bit of her exhaustion.

One of the weaker sequences puts younger performers centre stage on a date night to the soundtrack of ‘Endless Love’. This particular date night was set on the rooftop of Hummingbird House for two parents who have lost touch with each other, in part because of the demands of caring for two sick children.

This sequence could have had enough emotional resonance to cast even a cheesy Diana Ross and Lionel Ritchie song in a darker richer light. But the scene is played for laughs and the performers enjoy hamming up the lyrics a little too much for a moment stolen from their caring roles.

And the love in this house is not endless. Originally commissioned for Death Fest in 2018, Hummingbird House thinks in terms of the ‘three deaths’: your recognition of individual mortality, your actual physical death and finally when people stop speaking your name and you are forgotten.

Hummingbird House wants to stop the last death and to help families ‘hold their children’. When families fall ‘we will fall with you’, the audio tells the audience, as we watch performers lose hold of their child.

One of the final sequences – dazzling us with silver hoops spinning – emphasises the title’s second word: Live. For while the darkness surrounds the moments of light, they are still there: and this is what the families remember.

The writer is a guest of Brisbane Festival and Brisbane Marketing.