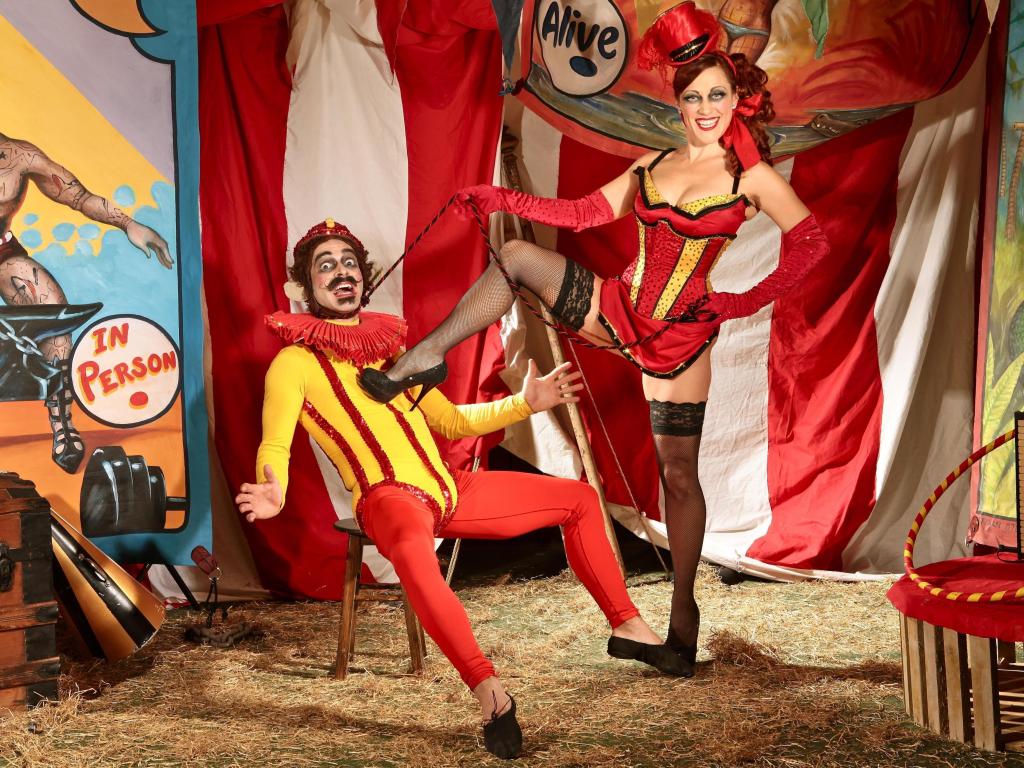 With promises of ‘acrobatic burlesque’, the opening ribbon work sequence is right on the money. Plenty of eyes, teeth, sparkling lipstick and impressively groomed moustaches seize our attention.  A series of toasts, playing on the idea of ‘bottoms up’, slows the action sufficiently to allow the stars to introduce themselves as first generation circus performers, and to promise us plenty of circus skills and displays of breasts.

The show that ensues is far more than that, with a helter skelter paced procession of hula hoop and acrobatic balancing, some audience participation in an educational segment regarding the American burlesque chimp, a punning flea circus, burning hoop work complete with an opening homage to 2001: A Space Odyssey, a visit to the magical world of Cirque du So Gay, a monkey strip cabaret number with an echoing arse and a banana fight with the audience, sleazy trapeze magic, framing an audience member to witness the creation of the dirtiest martini imaginable… and then drink it, before closing with a literal torch song.

Particularly fascinating is the use of an errant flea from the circus (Dita von Fleas landing the wrong way after stripping down to her flea-string while somersaulting from Trixie’s nose into a martini glass for her flea dip routine – that’s more than enough flavour of the long string of cheesy flea-puns marking the flea circus itself) to trigger an extended strip routine. It puts a fresh cast on the wriggling, posing, pouting, teasing that is such a staple of burlesque, and allows Trixie to close with a humorous comb and merkin pose that keeps the context and draws applause.

The Cirque du So Gay performance is a brilliant parody that nonetheless displays Trixie and Monkey’s strength, skills, appreciation of music and the ability to ham up the stage with the best of them – it is obviously a parody, though, as Cirque du Soleil would never employ a monkey in their humans-only circus. The costumes, lighting and choreography of the sequence are uncanny in their resemblance to an actual Grand Chapiteau routine, but the sensual disrobing and smoke machine orgasms are a little less family-friendly than their Canadian counterparts.

Bottoms Up Circus is an irreverent and absurd showcase of feats of strength, agility, grace and filthy imaginations – a welcome New York addition to Fringe World.