A rich dramatic feast presented by Cairns' Centre for Australasian Theatre.
Glyn Davies
[This is archived content and may not display in the originally intended format.] 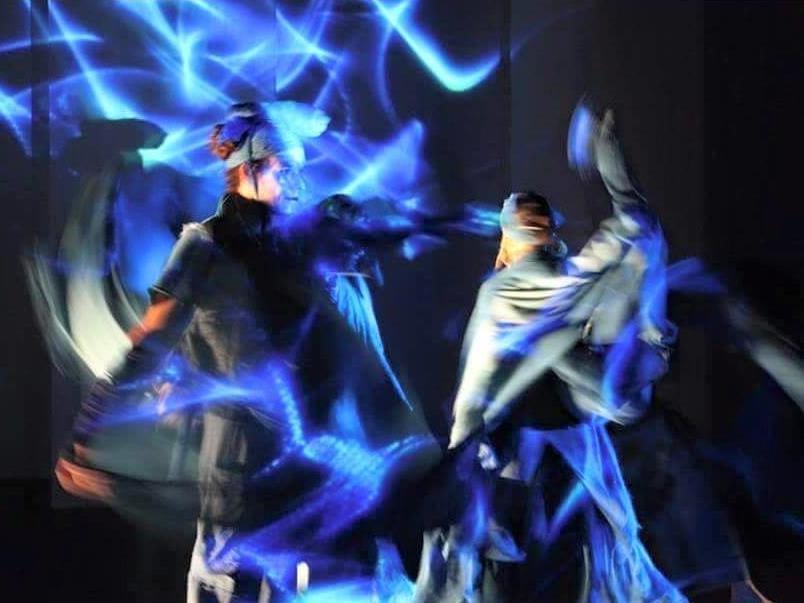 Let’s begin with a shout of wonder and admiration. This Fleeting World is such a rich feast – dramatic, visual, musical, cross-cultural, even mystical (and the adjectives insist on coming) – that it is not easy to offer a single, cohesive response. The most obvious point of entry is to see this fantastic piece as a journey, undertaken by pilgrims of varied cultural backgrounds, all in search of enlightenment. The publicity for the play describes it variously as a ‘mesmerising feast for the heart and the senses’, ‘a kaleidoscopic landscape of human experience’ and ‘a journey of the soul’. It is all this and more.

As the play begins, we are presented with a shadowy landscape dominated by a single human shape garbed in shapeless indigo robes. The rest of the stage is inhabited by dormant forms, rather like the rocks in a Japanese Zen garden. These too are clothed in similar tattered indigo garb. There is improvised music – haunting and uplifting – and percussion, and a projected backdrop as well. A feast for the senses indeed. And that is just the start!

It soon becomes apparent that the shapes are human too, and then we see they are pilgrims on a journey, carrying their particular burdens in the shape of bags slung around the hips (or later, of modern backpacks). The pilgrims arise, jerkily, and move, each according to the way his or her culturally-conditioned character dictates. A quick glance at the program reveals that all have been born of the Wheel of Return, shaped, strangely enough, like a Rainbow Serpent eating its tail. Soon they will cross the Rainbow Bridge into a world rather like our own, with cities, villages, forests, rivers and so on – all way-points on the route of their pilgrimage. They will endure trials, come together to eat and share dreams, fall out and fight with each other, all the while against a changing backdrop of projected images, with an improvised piano accompaniment, or haunting didgeridoo, bassoon or flute music, and the ever-present percussion. Eventually, they reach their sacred mountain. At the summit, they must endure their final test, before entering the temple that crowns it, in order to reach nirvana. As the piece ends, they disappear. Into thin air – as the rear projection screen carries the words of a centuries old Sanskrit text, the Diamond Sutra of 868:

Thus shall you think of this fleeting world:
A star at dawn, a bubble in a stream,
A flash of lightning in a summer cloud,
A flickering lamp, a phantom, and a dream.

To  bring this amalgam of many parts together into a harmonious whole must have taken hours and hours of work on the part of many artists – the actors, the set and costume designers, the musicians, the projectionists, and above all, the director, Guillaume ‘Willem’ Brugman, whose innovative expertise and vision is remarkable. This piece of theatre is experimental, so much more intriguing than realist theatre, more innovative, demanding more concentration.  Indeed, it is much more than Cairns audiences are generally accustomed to seeing and hearing in their theatres. For a start, the piece is wordless – in the sense that its impact is not made through dialogue as it is in plays of a more traditional kind. There is a goodly amount of mime and contemporary dance taking the place of dialogue, as is also the case in ballet. There is a fusion of artistic forms, reminiscent of 1930s German expressionism.

As it is the work of an ensemble, I am loath to pour praise on any individual artist, but this production forces me to make an exception to my rule. For example, I found Catherine Hassall’s choreography exciting and utterly in sync with the diffuse talents of the cast. Zelda Grimshaw’s piano music was always interesting and appropriate to the action, while Chris Browning’s audio-visual design was a delight to the eye and surprisingly original at the same time. As for the actors, they were always alert, on cue, and in character; Warrren Clements bookended the piece with his Indigenous Australian dancing, accompanied by the drone of a didgeridoo. Myako Masaki introduced elements of Japanese culture – the tea ceremony and kabuki – into the action. James Daley’s air of nonchalant calmness in all the tribulations of the journey was remarkable, while Eko ‘Chiko’ Suprianto’s Balinese dance introduced yet another note of cultural richness into the piece.

There was just so much to like in The Fleeting World, that it seems almost churlish to point to any flaws in the performance – but, to my mind there were one or two. Even though the dance sequences were always novel and generally expressive of the stages of the journey, I had to look to the map in the program from time to time, to check where the performers were. When visuals like the log crossing, the river waters or the stormy skies appeared behind the performers, there was no difficulty. But at other times an easily interpreted visual or two would have assisted the audience to identify places like the city terminal or the ants’ nests, and thus help them to appreciate the action of the dance more fully. My other comment is that parts of the first half of the journey seemed to drag, in comparison with the second half, where the pace was much more upbeat.

So, even though some audiences may find this production strange and slightly laboured at times, this work is original, and it is a triumph. When all is said and done, Cairns audiences are not likely to see a piece of theatre as intelligent and exciting as this in many a day. At the end, I was forcefully reminded of Prospero’s speech from The Tempest:

We are such stuff
As dreams are made on, and our little life
Is rounded with a sleep.

We are fortunate beyond our imagining to have a company as dedicated and professional as the Centre for Australasian Theatre on our doorstep.