An innovative, dualistic technique that sees the past bleed into the present in this story about massacre on Country.
Miranda Johnson 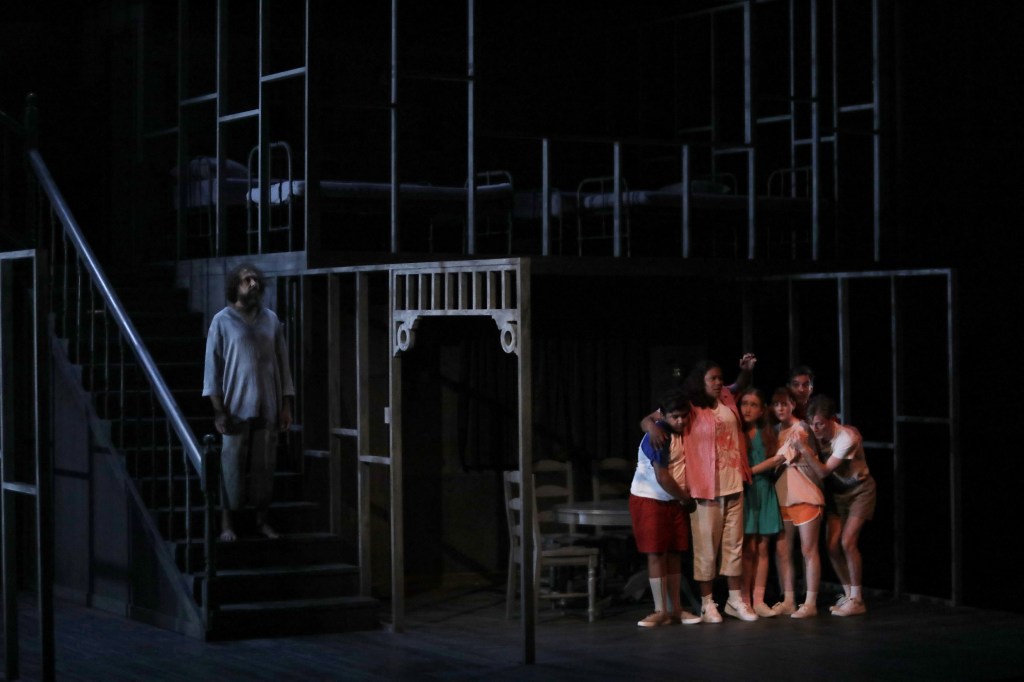 Set across multiple eras and relationships on Ballardong boodja, also known as the town of York, Western Australia, inland from Perth, York is a ghost story that challenges the narrative of what we might find scary, horrifying, or spine tingling, to bring us back to the awful realities of the way this nation was founded and the people whose stories need to be told.

It is an unusually formed play, collaboratively devised at every level. Written by Ian Michael and Chris Isaacs, and directed by Clare Watson and Ian Wilkes, there is a twin-like aspect to the storyline, the cast, and characters, whose presences echo across time. Following a young couple in the present-day, who leave their city life by purchasing an old hospital in the country town of York, to a group of young Scouts and their leaders in 1985, who stay at the same venue on a camping trip, the story traces the history of the building back to its military hospital roots. It eventually goes back further to the beginning of settler-colonisation in the early 19th century, before the hospital was built, when violent incursions onto Ballardong country and into Ballardong people’s lives ramped up.

The play is a story in two distinct parts, which is perhaps fitting for a story that is so dualistic in its own conception and direction. The first half, covering the present era and the 1985 Scout camp, is full of classic jump scares mixed with humour that has the audience variously rolling in their seats laughing or collectively gasping with delicious twinges of dread. It was clear the directors and cast were delighting in the tropes of 80s horror cinema and audiences were responding with glee. In particular, cast members Shakira Clanton and Jo Morris played beautifully off one another as the two hapless – and terrified – Scout leaders.

The second half radically changes gear, delving into the awful histories of this colonised land and inviting a reconsideration of what a ghost story might mean, who it is for, and who is telling them. Ghost stories can sometimes skim the surface of old legends and myths, seemingly ancient but in reality are only stand-ins for a much darker truth. York exposes the ghost story trope for what it is – a tale only for certain audiences, certain histories. However, this significant change of presentation and performance in the second act, following the energy of the first, lacked pace and movement, despite the urgency of the story being told.

I felt that the strength of York laid in the continuity of stories and characters, but this could have been drawn out more. While both halves of the performance were strong in their own ways, I also felt a stylistic disconnect between one and the other. I am sure this was deliberate – a way to exacerbate the realities beneath the ghost stories – but it would have been stronger with more threads leading through the two halves. The beautifully projected tree, a symbol of Country enduring beneath the house, could have perhaps been extended and made more meaningful throughout the whole narrative, rather than only appearing once or twice. It would have connected the story of the haunted building to the real narrative being told, of displacement and massacre on Country. It seemed to me that in the end, the ghosts were contained inside the house, when in reality they are all around us and throughout this land.