A solo show exploring ghosts of past injustices.
Tahney Fosdike 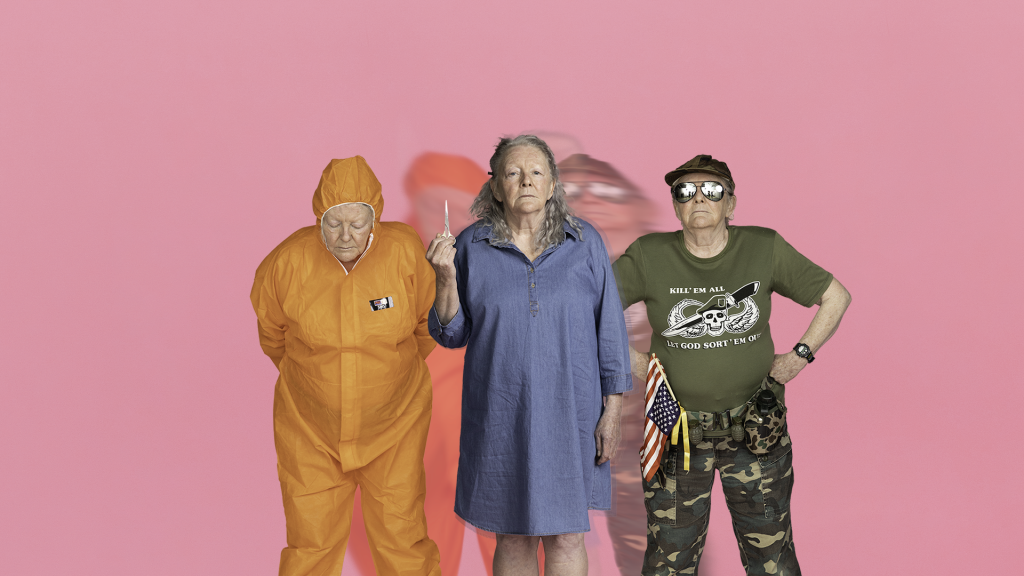 ‘Such personal transience between actress and character showed an ability to morph as a vessel to their stories while also emphasising, perhaps detrimentally, her singular perspective as both the play’s writer and only performer.’ Photo supplied.

Promising to delve into ‘the death chamber of White Australia’s memory banks,’ Whitenoise: 12 ghosts, with its hazy approach, struggled to move its vision into something ready for audience digestion.

Whitenoise: 12 ghosts centred its three acts around eyewitness accounts of legal and political events dominating the Australian media landscape several decades ago. Kathleen Mary Fallon held a mastering presence across all acts as three characters: Lindy Chamberlain, a woman wrongfully convicted of the murder of her dingo-slaughtered baby; Mamdouh Habib, an Egyptian-Australian detained by US authorities in relation to 9/11 and released without charges after three years; and a General in the First Gulf War, a conflict led by a US-coalition of 30 nations following Saddam Hussein’s 1990 invasion of Kuwait.

Fallon’s solemn delivery carried a compassion for her ‘true characters,’ although her omnipresence sacrificed some dynamic range. On stage between acts, Fallon changed into the costuming of her next subject. Such personal transience between actor and character showed an ability to morph as a vessel for their stories while also emphasising, perhaps detrimentally, her singular perspective as both the play’s writer and only performer.

Little garnished the one-woman show, with the set and sound design leaving a little to be desired in terms of enriching the potential of Theatre Works’ intimate satellite space. A bared-back, amateur production isn’t a crime – even the most basic approaches can produce phenomenal art. This production, however, succumbed to some nervous energies. Director Maryanne Lynch regularly appeared on stage to compliment the creative crew, commiserate cut ideas, or explain the show. At intermission, she asked the audience to applaud Fallon for remembering her lines – a somewhat uncomfortable demand. Lynch’s micro-directing even extended to her pacing restlessly around the audience and talking to the cameraman only metres from the stage during the performance.

While trying to ignore these awkward distractions, watching the performance also required navigating Whitenoise’s lack of clarity. Decades have passed since mainstream media avidly followed each story, and familiarity can’t be assumed of today’s audiences. Before beginning her first act, Fallon commented, ‘You will remember the Chamberlain pressers.’ Since the trial happened in the early 1980s, audience members under 50 might have little knowledge beyond the infamous ‘Dingo got my baby!’ idiom. Yet, Whitenoise treated all its referenced events as if fresh in our minds; coming without background knowledge left the play hard to follow.

Dense, quick dialogue added to this fog. Notwithstanding her competent performance, Fallon’s writing, although palpable with anger and empathy, struggled to translate into a clear script. With their run-on sentiments, the monologues created a convoluted style perhaps more suited to the written page read at one’s own pace (especially given a lack of autonomy to mull over the language, with Lynch’s persistent explanations further distorting the production’s intelligibility).

The dialogue pierced through its cumbersome mass when anchored to specifics: calculating the blood loss from a dingo attack, vivid descriptions of torture, statistics of POWs and bombings. Evocative details, like Habib’s counting of imaginary-coloured marbles to cope with violent interrogation methods and Chamberlain’s defeated line, ‘They said she behaved like a devoted mother… they said like,‘ propelled the writing from the abstracted political to engaging storytelling. However, as it stands, the scripted dialogue would benefit from further dramaturgical development.

Fallon finished her final monologue with the line, ‘This can happen to anyone.’ Finally, a bone for the present-day audience – a corrupt power system will hold anyone and everyone captive – but a little too late. The production, missing a clear picture for the most part, emerged with only a broad and vague (and age-old) anti-war, anti-media, anti-government message.

Why should we revisit these events from decades ago? There are many reasons, of course, but Whitenoise, living up to its namesake, doesn’t offer a discernible answer.