A staging of the Bard's last play to celebrate a milestone anniversary.
Miranda Johnson 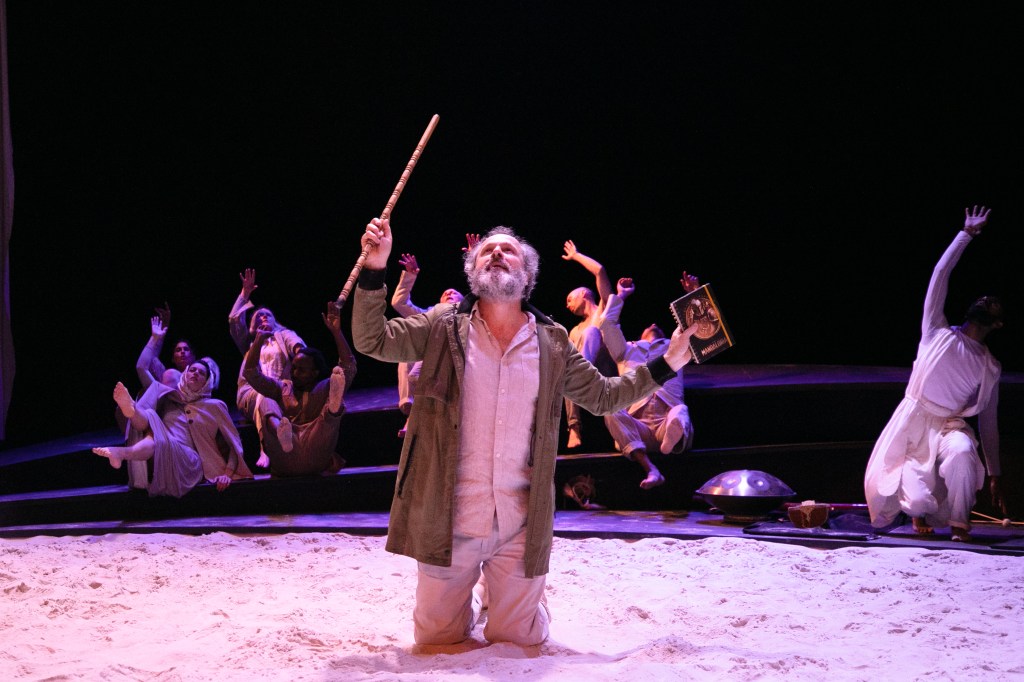 Directed by Matt Edgerton, Black Swan State Theatre Company celebrates its 30th anniversary with Shakespeare’s final play, The Tempest. This selection was made via a public vote, with the play triumphing – perhaps surprisingly – over more well-known and beloved Shakespeare classics such as Romeo and Juliet or A Midsummer Night’s Dream. However, The Tempest is an enjoyable tale, featuring a shipwreck, a magician, a sprite and two star-crossed lovers, accompanied by some eminently quotable lines and a dash of humour. Perhaps there’s also something romantic and appealing about it being Shakespeare’s last play, which ties in with a moment of reflection and reminiscence of the company’s milestone anniversary.

Presented at the Octagon Theatre with a cast of some of Perth’s most exciting creatives, there is much to enjoy about the performance, even if the play isn’t one you are particularly familiar with. The set design is beautiful and appropriately mystical, with a constant column of sand descending from the roof in a single point, meeting the sandy ground of the set, the island upon which our cast of characters is washed ashore. Opening with the shipwreck scene, the movement of the characters on the sinking ship and stormy seas is particularly compelling, and this is something that continues throughout the play, with movement director Sam Chester working closely with the cast to create compelling and beautiful shapes and movement that add richness to every scene; in particular, Pavan Kumar Hari’s Ariel is played with fluid and lithe movements that really look and feel magical.

This focus on movement is enriched through the use of music and singing throughout the performance, with the current online popularity of sea shanties used to full effect to illustrate the nautical journey and shipwreck. However, I felt that attempts to get the audience to participate in these singalongs didn’t really hit the mark, and much more enjoyed hearing the cast singing and harmonising together without the distraction of participation. I wonder if this would have been more successful in a different venue, with the size and multiple seating blocks of the Octagon making the larger space feel less communal compared to the intimacy of the stage.

The set design also allows for cast members to sit and watch the scenes from a step, with most main characters remaining onstage nearly the whole play. This added to the eeriness sensed by the characters on the island – that someone is watching you or approaching, but you don’t know who or what it might be. This is central to the mystery and intrigue of the play, and the cast did a wonderful job of embodying the mystery, mystical senses and humour that comes along with the story. Humphrey Bower is an imposing and fabulous Prospero, with Ian Wilkes and Phoebe Sullivan convincing as young lovers Ferdinand and Miranda. Stand-out performances from Charlotte Otton and Caroline McKenzie see them playing a gender-flipped Stephanie and Trincula, drunkards and fools who stumble about the island encountering various characters with inevitable confusion and misunderstanding.

The staging, movement and singing were the stand-out elements of the performance for me, with the projections at the end (featuring reflections on what love is by audience members) heart-warming, but also slightly too much so. The cynic in me felt that this undermined the love story at the heart of the drama to the play’s detriment, with Miranda and Ferdinand’s love-at-first-sight experience feeling shallower than the long-lasting, considered investments in relationships spoken about by the audience. However, putting that aside, it felt like a fitting way to celebrate the labour of love of Black Swan State Theatre Company over its 30 years, and a reason enough to celebrate.

Octagon Theatre, The University of Western Australia
Tickets: $36-$93
The Tempest will be performed until 11 December 2021