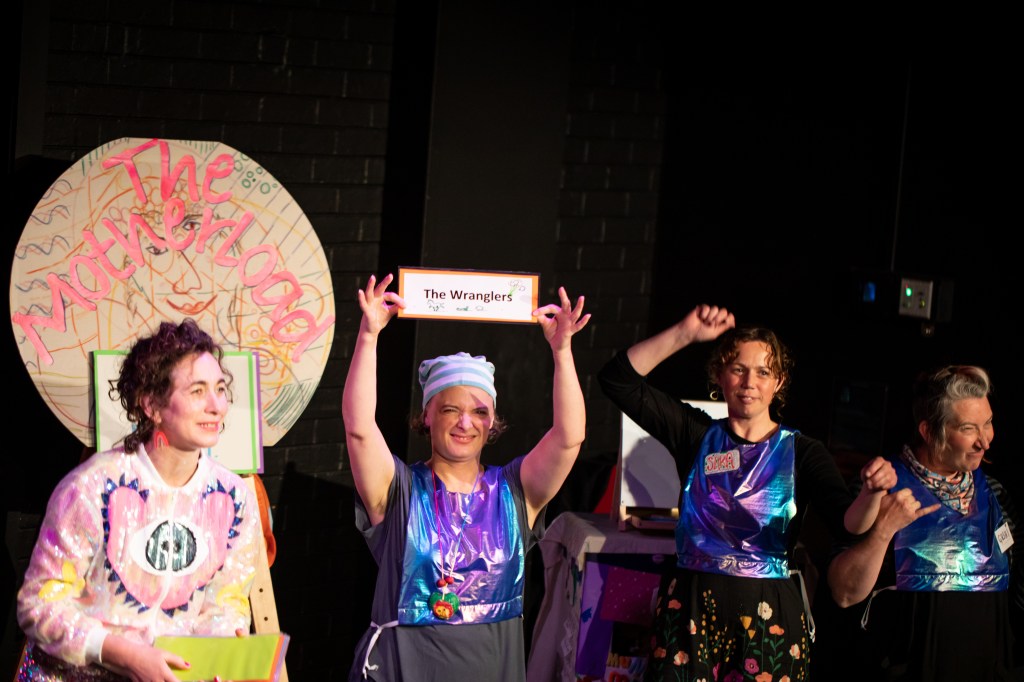 Gleefully wangling with the mess of motherhood. Picture by Rebecca Thompson.

Not being a parent, let alone a mother, I admit myself thoroughly unqualified to comment on the content of this entertaining show. So let’s talk about form.

The show opens rather inauspiciously with a woman giving a loud and visceral impersonation of a woman in childbirth. It is not immediately appealing, but it is useful in establishing the ‘serious’ scenes that are interspersed through this highly comic show.

The woman disappears behind a curtain, soon parted to reveal a backdrop of a lolly-pink and glittering vagina. Our Host for the evening, Bryony Geeves, bursts forth, and we are thrown into the fast-paced, inventive world of Motherload – The Game Show!

Geeves introduces fellow mum-actors Melissa King and Carrie McLean, who assume the roles of team captains, and welcomes four mum-competitors from the audience up onto the stage.

The show is composed of segments chronicling the mother-child relationship: gestation, after-birth, baby, toddler, primary, teen, and empty-nester. Games include such mad-cap activities as ‘Dress the Toddler’, ‘Pack the bag for an Outing’ and ‘Interpret the Painting’; this last is particularly enjoyable as the competitors come up with ingenious interpretations of toddler artworks. At the performance I attended, the mums were clearly experienced in this particular form of art appreciation.

The show is wildly funny, and at the end, my jaw was genuinely aching from smiling and laughing. Punctuating the hilarity (and, importantly, giving the volunteer competitors a rest) are non-game sequences performed by the three actors. There is a gentle movement scene of three mums desperately but lovingly trying to get their bubs to sleep, and a longer scene that utilises verbatim techniques and ponders the sometimes difficult relationships of mothers and teenagers. The show concludes with the bitter-sweet reflections of empty-nester mothers.

The three performers are buoyant, joyous, spontaneous, clever, resourceful … perfect, in fact.  As directed by Julie Waddington, the show is intelligent, generous, warm and laugh-out-loud funny. Its serious moments are sincere without being cloying.

The volunteer competitors are warmly supported. There is none of the embarrassment or manipulation often displayed in audience-participation shows. For example: when confronted with the toddler question, ‘What was the time before time?’, one team could not think of a funny or clever response, and opted instead for ‘We honestly don’t know.’ Immediately the Host congratulated the team on the excellent strategy of simply telling the truth to their little ones. This is a loving show.

The show would tour easily to urban and regional locales, and I could see it attracting an appreciative audience as an afternoon or early evening show at, say, the Adelaide Fringe. There are some matters that would need to be addressed. Amplification would help the host, and the long verbatim segment on the teenage years would benefit from some pruning. More critically, the show is overly reflective of a middle-class, middle-income, Anglo experience of motherhood: consideration would need to be given to incorporating a greater diversity of voices.