It has been more than a decade since Simon Gallagher’s production of The Mikado has played Adelaide.
Rohan Shearn 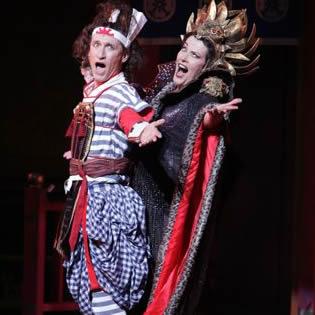 It has been more than a decade since Simon Gallagher’s production of The Mikado has played Adelaide. Universally acknowledged as one of Gilbert and Sullivan’s finest masterpieces, this ‘refreshed’ production offers the audience a light-hearted romp featuring some of Australia’s finest performers combined with some up and coming talent.

As the curtain rises to reveal Graham Maclean’s Asiatic temple inspired set complete with screens and dragons, taiko inspired drumming rings in the overture and an up-beat production directed by Craig Schaefer that never tires, ensuring a laugh a minute from its audience.

Leading the two and a half hours of mayhem are David Collins (Ko Ko) and Colin Lane (Pooh-Bah) who are given plenty of rope to allow their comedic talents to shine. Though the schoolyard humour and the one too many ‘Yum Yum’ jokes tired after awhile – this could be considered a matter of taste – the audience reveled with every guise.

Graeme Isaako made a delightful Nanki-Poo and likely suitor to the finely attuned soprano, Helen Donaldson as Yum Yum. Julie Anthony was divinely evil as Katisha, proving why she is one of Australia’s leading ladies and the richly timbered voice of David Gould as The Mikado of Japan rounded out the more experienced musical theatre performers.

The male chorus shirtless and resplendent in lycra were in fine form not only in the strength of their voices, but in their execution of Simon Lind’s energetic choreography.

Not so successful were The Absolutely Fabulettes (Diana Holt, Kaitlin Oliver and Danika Saal) who never really recovered after bumbling their way through the opening strains of ‘Three Little Maids’, lacking the depth and strength of a larger female chorus.

Disappointingly, Kevin Hocking’s musical direction was not helped by some rather dated arrangements and a less than impressive sound from his 6 piece band. The singing at times was hindered with sound balance issues and overly fast tempos, which is only saved by the strength of its lead performers.

Criticisms aside and amongst the mayhem and merriment it was obvious the cast were thoroughly enjoying themselves. While G & S enthusiasts may not approve, the opening night audience at the Festival Theatre appreciated this not so serious interpretation of a great work.

Rohan’s background in theatre administration and event management dates back many years and has included positions throughout metropolitan Melbourne, regional Victoria and New South Wales. Key appointments include General Manager for the Riverina Theatre Company, Northern Rivers Performing Arts and the Feast Festival in Adelaide. He has had the opportunity to work on a diverse range of productions from intimate theatre through to large-scale warehouse events. In 2006 he was engaged as one of the Precinct Operations Supervisors for the Melbourne Commonwealth Games. Currently, he is the Creative Producer for Byte Media and Adelaide Editorial Coordinator for AussieTheatre.com, and is also completing his Master of Arts (Arts and Cultural Management) through UniSA.