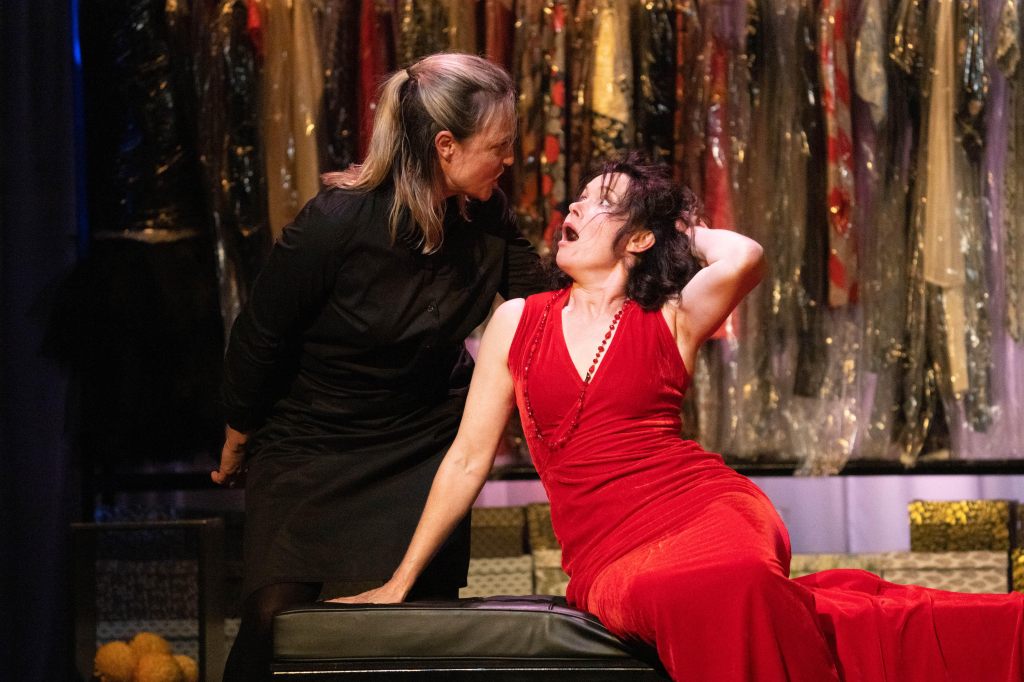 Jean Genet is uncompromising. A gay thief who did prison time, he is, as far as I know, the only playwright ever to pull a gun on the director during rehearsals for one of his plays. He is also, as far as I know, the only white European to be invited to address a rally of the US Black Panther Party, or to live for several years among Palestinian refugees in Lebanon. Genet is the ultimate outsider.

At the time of its premiere in 1948, Genet’s The Maids, was arguably the most shocking theatrical exploration of ‘deviant’ sexuality up to the mid-20th century. (Only the works of German playwright Frank Wedekind come close.) The Maids of the title are a pair of sisters in domestic service who, while their mistress is away, regularly enact a ceremony with sadomasochistic overtones, in which they fantasise about the roles of mistress and servant. Having no real power only serves to make their fantasies even more dangerous. Murder offers a key to freedom. But what would the sisters do with freedom, when all they know is servitude?

Genet – the ex-con – knows that all freedom is conditional. We are all prisoners. We all hold fast to a system that crushes us.

It’s all a far remove from the everyday experience of your average Hobartian.

And yet, frankly, Genet’s theatre is more realistic than much current theatrical output – closer to the genuine feel of power-play, hostility, denigration and outright violence which nourishes our behaviour, interactions and ambitions today. The madness of the world (I mean madness in both senses: the anger as well as the imbalance) is making Genet’s extreme worldview appear alarmingly appropriate.

So there’s good reason to return to Genet’s work today. Besides which, actors love it.

Great female actors (and many male ones too) are drawn to perform The Maids. Glenda Jackson teamed up with Susannah York in a mid-70s film version, and Cate Blanchett and Isabelle Huppert performed it at Sydney Theatre Company just a few years back. Now Marta Dusseldorp and Essie Davis, two A-list stars, are playing it in Hobart’s intimate Playhouse.

I have rhapsodised about Dusseldorp previously for ArtsHub: her talent, her intellect, her refined formal performance, her natural facility with comedy and drama and ability to flip between them.

Here, Dusseldorp is matched spectacularly by Essie Davis. Indeed, the prime pleasure and strength of this production is the wonderful balance and collaboration these two great – and they are great – actors achieve.

The production is staged by Ben Winspear, a director whose work I have also previously discussed here, and which I admire. His direction here is attractive, thoughtful, inventive and vigorous. Particularly effective and enjoyable is his strong yet beautifully subtle distinguishing between the scenes of fantasy and reality. Yet the production does not totally satisfy, and this can be traced back to the challenging structure of the play. As the play twists on itself like a Möbius strip, it feels like some more signposts are needed: mini-climaxes along the way to allow us to regather and proceed. In the absence of these, the play’s repetitions and evasions cause it to sprawl.

The production is handsomely presented with an attractive set, sympathetic lighting and an initially very effective soundscape, though this becomes heavy-handed as the show progresses.

The translation by Martin Crimp is fresh and modern while remaining true to the poetic spirit of the original; it is certainly preferable to the expletive-laden version the STC delivered a few years back.

The Maids was performed from 28 October – 7 November 2021, Playhouse, Hobart