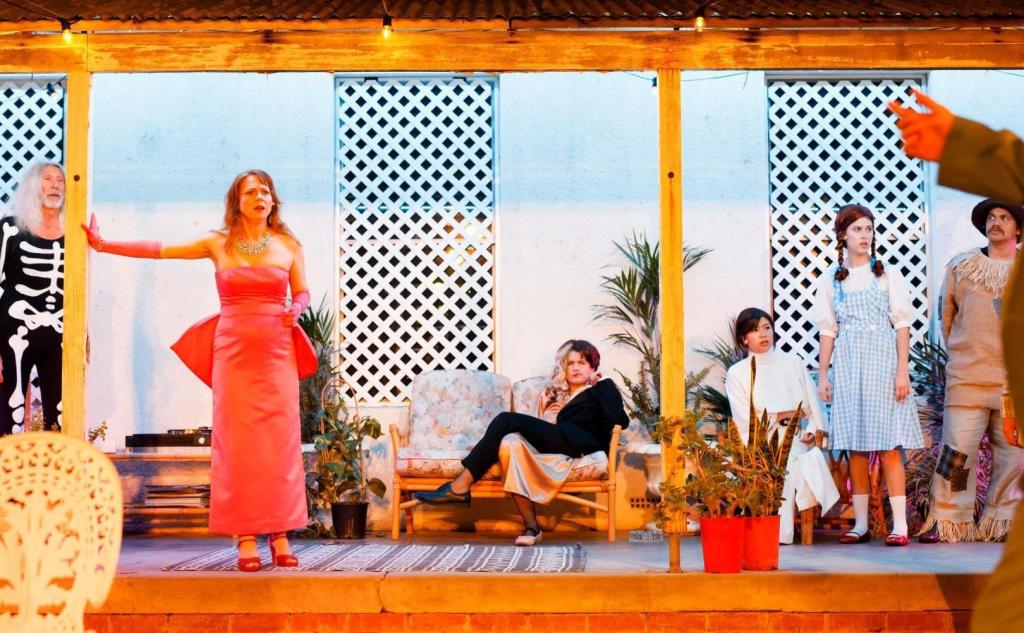 The cast of The Cherry Orchard. Photo: Daniel J Grant.

Black Swan State Theatre Company, in association with Perth Festival, has given Anton Chekhov’s final masterpiece, The Cherry Orchard, an Aussie makeover. The Balmoral apartment’s been sold, and the St Kilda fling is cactus. Anya’s dragged her mum across the Nullarbor back to Manjimup.

The Cherry Orchard has been given an Aussie twist before, by Melbourne Theatre Company in 2013, so while this is not a groundbreaking idea, it remains a clever one. Moving the production from the walls of a traditional theatre into the hallowed (and some say haunted) grounds of Sunset Heritage Precinct is also a good idea (on paper) as the grounds and areas chosen (should) lend themselves beautifully to the storyline.

‘It is a story of the futile attempts of aristocracy to maintain its status and the bourgeoisie to find meaning in its newfound wealth.’

The Cherry Orchard revolves around Ranevskaya, an aristocratic landowner who returns to her family estate just before it is auctioned to pay the mortgage. Unable to listen to suggestions and offers to save the estate, it is sold to a former labourer, now successful property developer and the family must leave to the sound of chainsaws cutting down their beloved cherry orchard. It is a story of the futile attempts of aristocracy to maintain its status and the bourgeoisie to find meaning in its newfound wealth.

Chekhov had himself planted a cherry orchard, and when he lost it a short while later, the new owner did in fact cut down the cherry trees.

Chekhov’s writing is oft described as polarising, as audiences either love or loathe his level of description. His content lets an audience in to the minutiae of characters lives in such a way that we feel like we know them inside out. His scripts waste little time on stage directions or distractions and most productions somewhat imitate the stark staging and focus on the characters and their voices and lives.

The cast of The Cherry Orchard. Photo: Daniel J Grant.

While I’m not a purist, change should be embraced for more than just changes sake. This adaptation/rewrite is messy and provides little other than the basics of each character, thus not allowing the audience to form any connection or concern whatsoever about their plight.

Act 1 starts in the Heritage Precincts Grand Hall, and with a couple of actors pre-set, the bold locking of the old doors is the signal for the audience to hush. The set is an old house broken into a series of vignettes across the floor, which is simultaneously clever and distracting. The devil is in the detail with Chekhov and the staging alone detracts from this, let alone the sound problems that large old spaces and an audience in the round create. While moving from Act 1 space 1 to Act 2 space 2 it was clear listening to surrounding audience members that not many had been able to clearly hear much or all of the dialogue, even though actors wore microphones.

These problems continued in the BBQ scene where most of the audiences focus went to not slipping out of plastic chairs facing downwards on a slope while trying to concentrate on the scene unfolding in front of them.

Act 3 took us to another part of the venue, which was beautiful and fitting, but I was not alone in being distracted by pricing stickers on the bottom of shoes and the side of every pot plant. Theatre should be a form of escapism, but it is hard to sidestep reality for a few hours when Bunnings pricetags are spread across the stage. It’s lazy.

‘The set is an old house broken into a series of vignettes across the floor, which is simultaneously clever and distracting.’

So much time within the evening is dedicated to transitions between acts and drunken party scenes, that the sheer richness of the script is lost. It is cute that some of the place names and situations have been ‘Aussiefied’, but even this could have been done in a more sophisticated manner. Characters retained their Russian names, yet were transported to locations closer to home, some wore outfits that were clearly straight from the 80s while other cast members looked like they had walked off the set of The Sullivans. Even common staging tropes were seemingly unorganised, as actors walked offstage at the end of Act 1, but were still in place at the end of Act 2, causing significant confusion and then delay in moving to the next area for audience members.

Rewriting The Cherry Orchard in a contemporary WA setting could be a potent expose on the reality of historical wealth versus cashed up bogans, and the discomfort of their crossed paths – but relying on daggy costume parties, diminishing a rich script into a debate about chutney and relish and the overuse of crude ‘ockerisms’ prevented the play from exploring the complexities of a new social paradigm and making any impact.