Back to Back Theatre brings a street performance with podcasting techniques to transform a public display into an intimate experience.
Anita Sanders 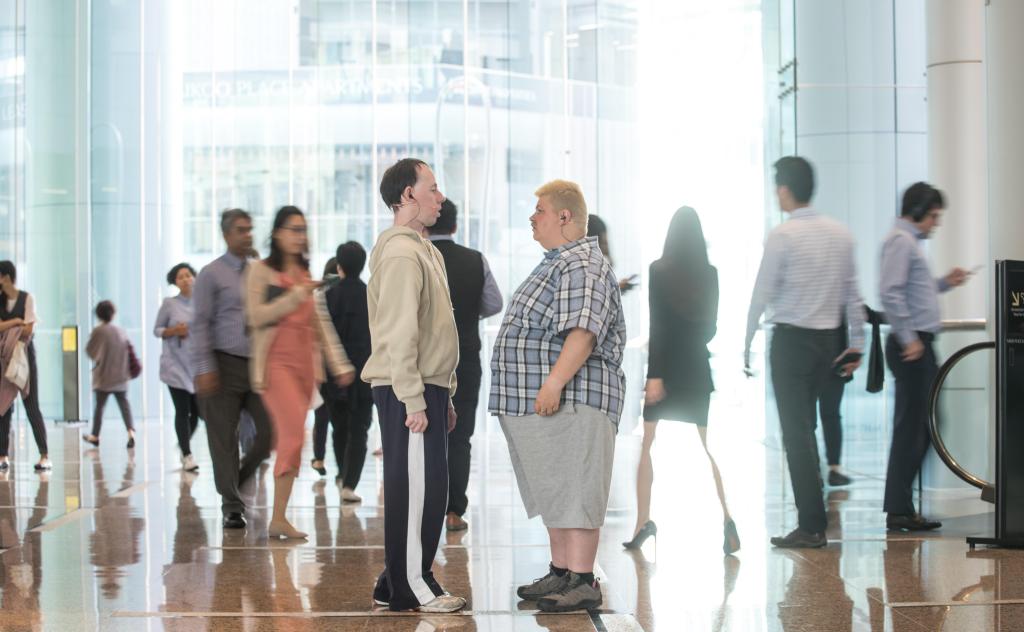 Small Metal Object blends street performance with podcasting techniques to transform a public display into an intimate experience. Whilst simple at first, a mystery unfolds where the audience must join the clues to understand what is going on and the risks afoot. By using headphones as the only method for conveying audio and dialogue, the production gets stuck on effectively conveying detail but is uplifted by its use of Mosley Square as its stage.

‘Whilst simple at first, a mystery unfolds where the audience must join the clues to understand what is going on and the risks afoot.’

Steve (Simon Laherty) receives some bad news about his friend, Gary (Brian Tilley), triggering deep thinking that requires him to stay in the same spot. Meanwhile, Alan (Jim Russell) needs Gary and Steve’s help; the street turns into a stage for battling wills. The simple plot makes space for clever humour and allows time for the audience to read between the lines to truly understand what is at stake. Reading through the lines and creating a tone of mystery, becomes a balancing act that the production doesn’t completely master. In one moment, there isn’t enough context to understand whether Gary is referring to Steve’s personal problems or how to help Alan. Fortunately, the balance is often achieved and so not always understanding doesn’t affect the overall enjoyment of the production.

The cast show great understanding for their performance space through their use of gesture. In the beginning, Laherty and Tilley’s gestures seem unnaturally big and pointed but as the show progresses, they settle into more suggestive and slight gestures. In those moments, they fit perfectly into the streetscape and their voices in the headphones almost feel like an overheard conversation. Laherty and Tilley movements are jagged and slow juxtaposing Russell who is smooth and fast. It adds visual fuel to the quiet feuding wills and helps define who is on who’s side.

Back to Back Theatre’s Small Metal Objects for Adelaide Festival 2021. Photo by Nate Schilling.

This show is made extra special by it’s set. With just a bank of seating looking down Moseley Square in Glenelg, the street becomes an unpredictable backdrop. The square has small pockets of activity: cyclists cutting through on their commute home, friends passing through and individual resting on the benches. The busyness matches the gentle, slow unfurling tone. The positioning of the seating bank, centre of the palm tree strips, creates a well-defined space for the show.

The show is full of movement that sometimes works well to drive focus to one part of the street but other times it misaligns to the character’s drives. Director Bruce Gladwin, uses the entire square, showing adaptability to the space. They commence the production with the characters, entering from the top of the square and walking towards the seating. An effective mechanism for defining how far the audience will need to look out into the square and delivering the initial gentle tone that underlines the production.

Back to Back Theatre’s Small Metal Objects for Adelaide Festival 2021. Photo by Nate Schilling.

Gary becomes a character that’s on the move a lot and seemingly for no reason. He often disappears to the sides of the square and strides back into the space from another direction. It’s confusing as Gary says that he will not leave his friend alone, and yet he does. Laherty is positioned well; he could easily be forgotten in the commotion as he stays in his one spot but by keeping him close to the audience but to one side, he is always part of the scene. A choice that’s essential as it works as a reminder that the whole story is unravelling because of Steve’s choice to stay still.

‘Small Metal Objects is a production that explores the street as a performance space while maintaining the intimacy expected from traditional theatre.’

Headphones are given to each audience member to hear the performers and music, which maintains the idea of overhearing this quiet conflict occur. However, the dialogue is not manipulated enough; no matter where the performers are in the square their volume is the same. This reduces the sense of space and the effect of overhearing the story. The music ebbs between matching the tone of the moment and being overzealous. For example, multiple instruments play as Gary tells his bad news to Steve, cheapening the moment by making it feel cluttered. The music does sometimes match, fully fleshing out the scene through adding additional tone, for example: sweeping music as a realisation is found. If only music was used less, it would create support to the silence and add colour to essential scenes.

Small Metal Objects is a production that explores the street as a performance space while maintaining the intimacy expected from traditional theatre. For the most part, the production thrives with its self-aware performers, clever directorial choices but gets snagged on its use of sound and aligning action with character motivation. This show is pushing at its creative boundaries and will delight those who enjoy people watching but have always hungered for the deeper story going on.