Theatre Review: Much Ado about Nothing by TheatreiNQ

The Bard’s most farcical play was a flawless choice for TheatreiNQ's pandemic-aware return to the stage.
Trevor Keeling 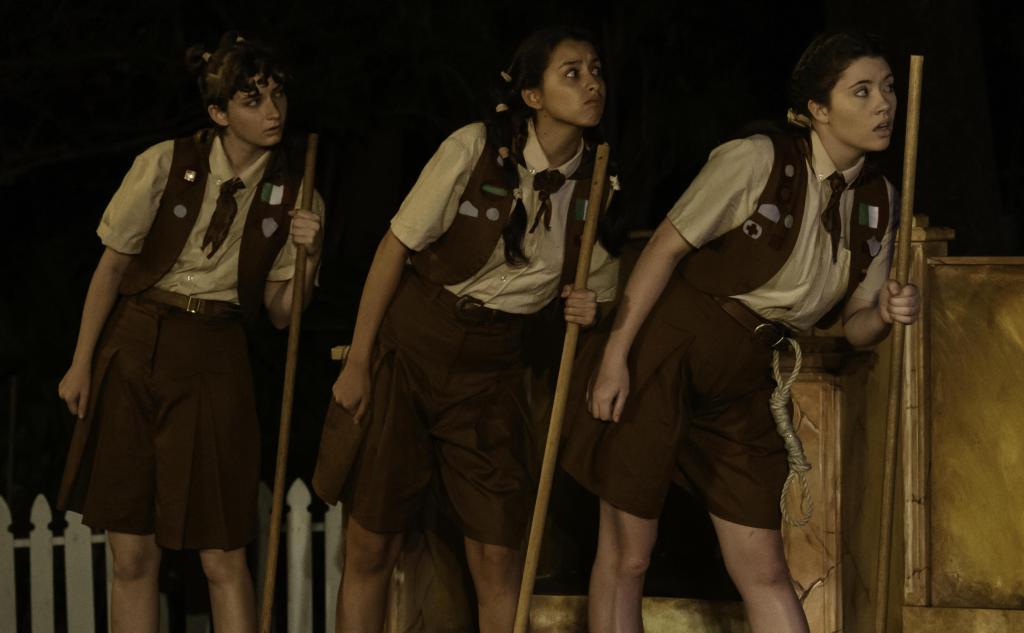 I felt as if I was a tortoise slowly sticking his head out from the shell when I attended the sold-out season of Townsville’s annual outdoor Shakespeare presentation by TheatreiNQ, a remarkable company that has survived against all odds with its special blend of unique (and successful) theatre for regional Queensland.

If this emergence from hibernation is a metaphor, then I can only say that this sparkling production had the collective audience emerge renewed and invigorated, as if we had graduated from pupa to butterfly! We rejoiced in appreciation of the merits of the production, and an ill-disguised relief at being able to return to this ‘thing’ that matters so much to many of us. Underneath it all there was perhaps also a bitter reminder of what we have had to sacrifice (and indeed missed) and sadly what many had taken for granted in the past.

The hallmark of all TheatreiNQ’s productions has traditionally become a sense of community from an enthusiastic, disciplined and (of course) talented ensemble cast and this production was no different in this respect – and every other.  The centrepiece of the company’s annual program is Shakespeare in the Park, held annually at Townsville’s Queen’s Gardens, a corner of lush tropical forest with the background of the city’s iconic Castle Hill.

While this production again featured an exuberant cast, what was different was the underlying but little-heralded sense of what this occasion will come to mean. With our theatres and entertainment spaces closed since March this year, this production will come to mark an important milestone in the history of culture in Townsville. It is the first production to be mounted, which may represent a return to an albeit hesitant normality after the insanity of the past six months. But what better way to do it?

This most farcical of the Bard’s plays was a flawless choice. The production was packed with good humour, expert comic timing and infected with such a sense of joie de vivre that it would have been difficult for anyone not to be part of it. It was a sparkling production which was spot on for the current times we live in.

In customary fashion, director Terri Brabon always tackles the Shakespearean comedies with a finely-tuned sense of the ridiculous verging on the pantomime. The seriousness of the situation apart, the COVID-19 crisis has provided the opportunity for some splendid fodder.

After all, what other comedy has a ‘masked’ ball where the masks took on a completely new meaning – absurd and as hilarious as they were. The women’s masks were all adorned with a pair of luscious red lips while the men’s masks all sported a cartoon moustache.

Right from the very start we knew what sort of night we were in for, as we were introduced to Dogsberry and Verges kitted out in scout leaders’ uniforms complete with their hench(wo)men – erstwhile Brownies expert in martial arts. With their strange garb, these characters looked like an amalgam of Brownie, Cossack soldier, boy scout and member of the Hitler-Jugend. The result was hysterical, and the introduction of the play was a hilarious interpretation of the COVID rules and regs as delivered by these caricatures.

Ostensibly the protagonists of the play, there were good performances from Gemma Shield as Hero and Jacob McCarthy as Claudio, but in truth the play belongs to Beatrice and Benedik.

Director Brabon plays the sharp-tongued but witty Beatrice. Hers is a light and sparkling interpretation which does not contain an ounce of the shrew. Brendan O’Connor as Benedik displayed customary great comic timing and their shared scenes confirmed their long experience working together on stage.

It is true that every single member of the cast contributed to the uproarious mayhem of the production but there were some glittering highlights.

Lisandro Garcia’s Don John was a delight, embodying the villain of the Victorian melodrama with relish, while John Goodson’s Dogberry was a sight to behold. This Dogberry (the Akela) was an overweight scoutmaster complete with shorts, long socks and attitude, while his Brown Owl sidekick (Sally McCutcheon) was reminiscent of an Australian version of Joyce Grenfell in The Happiest Days of Our Lives.

Also of note were Kellie Esling with an Italian mama version of Antonia and Bernie Lanighan’s espresso-swilling Leonato.

Lending substance to this nonsense was a simple, effectively lit, multi-level set, hugely assisted by Brabon’s tongue-in-cheek choice of music. With the Sicilian setting there was excellent fodder for more fun. With everything from ‘That’s Amore’, themes from The Good the Bad and the Ugly and The Godfather and a hysterical Italian take on The Real Thing’s ‘You to Me Are Everything’ at the end.

So much has been mooted in the media about how COVID-19 has affected the economy and the arts, and what things may or may not look like when we come out of it. The only yardstick we have to measure is the past, and at best our collective return to ‘normality’ can only be tentative.

But I can think of no better way to celebrate a cautious emergence from this COVID-19 craziness than an evening spent in Queen’s Gardens in a forcibly reduced (but effective) setting. This has led to an unprecedented sold-out season before the show even opened.

And perhaps this ‘new normal’ will force us to recognise the need to appreciate and relish every moment of the arts; perhaps it could lead to a new Renaissance?

Much Ado About Nothing by William Shakespeare
A TheatreiNQ production
11 – 27 September 2020,
Queen’s Gardens, Townsville.
Season sold out.