The critic-proof production has opened in Australia to rapturous reviews – but what did we think?
Richard Watts 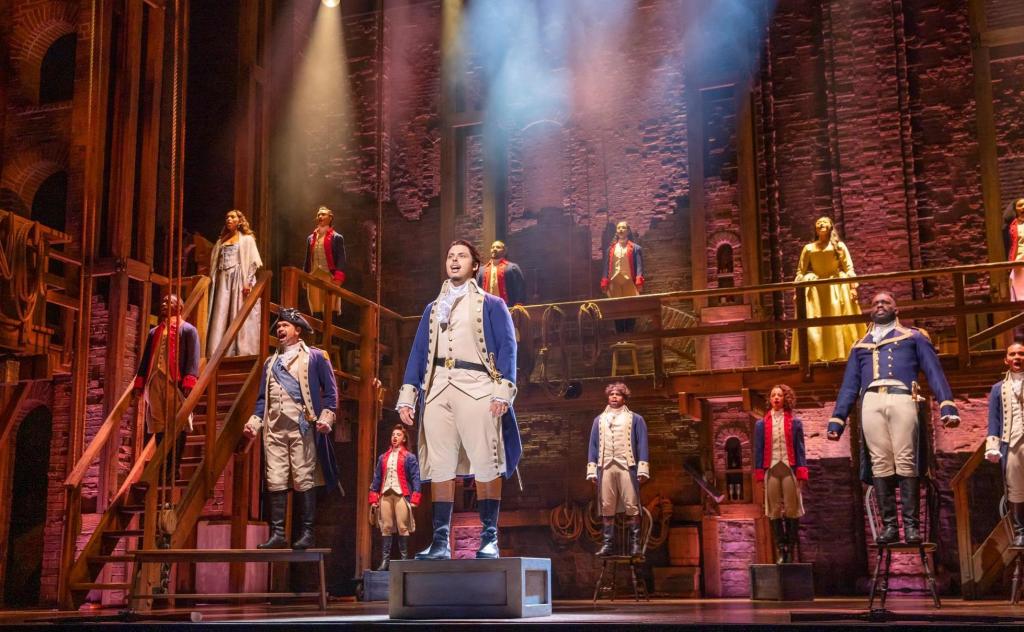 With tickets now on sale through to November, Hamilton is essentially critic-proof; a contemporary work for the stage that’s transcended its musical theatre origins to become a bona fide pop cultural phenomenon.

Which is not to say it’s perfect. In an Australian context especially, this lyrical celebration of legendary founding fathers and the myth of American exceptionalism can feel a trifle earnest at times, even grating.

Its sexual politics also frustrate; while writer/composer/creator Lin Manuel Miranda gives his female characters some stirring songs, such characters lack agency and independence, being almost entirely defined by the men in their lives. Possibly true to the historical period presented in Hamilton yes, but the lack of a single song in which the Schuyler Sisters discuss their own lives, political ideas and personal philosophies at length (such as whether or not they were comfortable with their father’s position as a prominent slaveowner) shows a distinct lack of imagination from a writer/composer who was nonetheless able to conceive a multi-racial musical about America’s white forefathers.

In Miranda’s own words, Hamilton depicts the ‘story of America then told by America now’. In that regard, this Sydney production is exhilarating. As the local cast took to the stage at last week’s industry and media preview, the presence of so many performers from Aboriginal, Māori, Samoan, Filipino and other cultural backgrounds inspired genuine joy and delight while also being a much-needed challenge to an industry whose casting decisions sometimes appear pale and stale.

While Hamilton is certainly far from stale, the performance this reviewer attended definitely felt a trifle undercooked.

It is unusual to review a preview and often, the faults on show (which on this particular night included a flubbed line, a performer’s mic not being turned on in time to catch their first utterance when they re-entered the stage, and choreography that lacked the precise, synchronous movements expected from a production of this standard) may well have been fixed by opening night.

In this instance, however, ArtsHub was specifically invited to a media and industry preview, and we have clarified with the production’s publicist that a review was appropriate. So here we are.

Lyndon Watts was vocally impressive in the central role of Aaron Burr, the friend and rival of American polymath Alexander Hamilton, while also letting us see the character’s inner pain and anguish, though his performance was physically a trifle stiff – a flaw detectable in several of the cast, as if too much time spent off stage last year had inhibited them from fully embodying and inhabiting their characters. Stiffest of all was Victory Ndukwe, especially in the second act opening number ‘What’d I Miss’, where his turn as Thomas Jefferson clearly lacked the swaggering, rock-star confidence the role demands.

In the title role, Jason Arrow gave an introspective performance that hinted at a man whose mind is always looking forward rather than focused on the here and now, though there were times when I wished for more flare and fire from his performance. Doubtless that will come with time.

Shaka Cook was compelling, giving a confident, full-bodied performance as Hercules Mulligan, though his Act Two take on the older statesman James Madison was less clearly defined; Chloé Zuel’s lustrous voice shone in a confident and charismatic turn as Eliza Hamilton (née Schuyler), and Akina Edmonds also impressed, through her enunciation could have been clearer at times. As mad King George III, Brent Hill gave a camp, lip-curling performance that utilised the dramatic pause perfectly.

Much has been written about Hamilton – its skilful blend of hip-hop and show tunes; the clever decision to depict senatorial debates as rap battles; the canny use of repetition and leitmotifs for dramatic effect; and  and yes, its author’s failure to tackle the issue of its characters being slave-owners head-on. The fluid staging, seen at its best in the First Act number ‘Yorktown (World Turned Upside Down)’ and Act Two’s ‘Hurricane’ and featuring chairs, lamp posts and tables carried swiftly on and offstage in order to create a range of scenes and tableaux, is also worthy of praise, and works beautifully in concert with Howell Binkley’s original lighting design.

Conversely, the somewhat limited movement vocabulary of Andy Blankenbuehler’s choreography felt repetitive; nor was it well served by dancers who lacked unity of form and motion, as previously mentioned, though again this is sure to improve as the season progresses.

More positively, despite some stiff performances as already flagged, the emotional truths of the show shone through powerfully in the production’s latter scenes, with the reconciliation of Hamilton and Eliza (‘It’s Quiet Uptown’) being especially poignant. Reader, I wept.

As noted at the start of this review, Hamilton is effectively critic-proof. The whoops and cheers of the more vocal sections of the audience on the night this curmudgeonly reviewer attended indicate a loyal audience who will adore this local production despite its faults – many of which will improve over time. I wish the production, and all involved with it, every success.