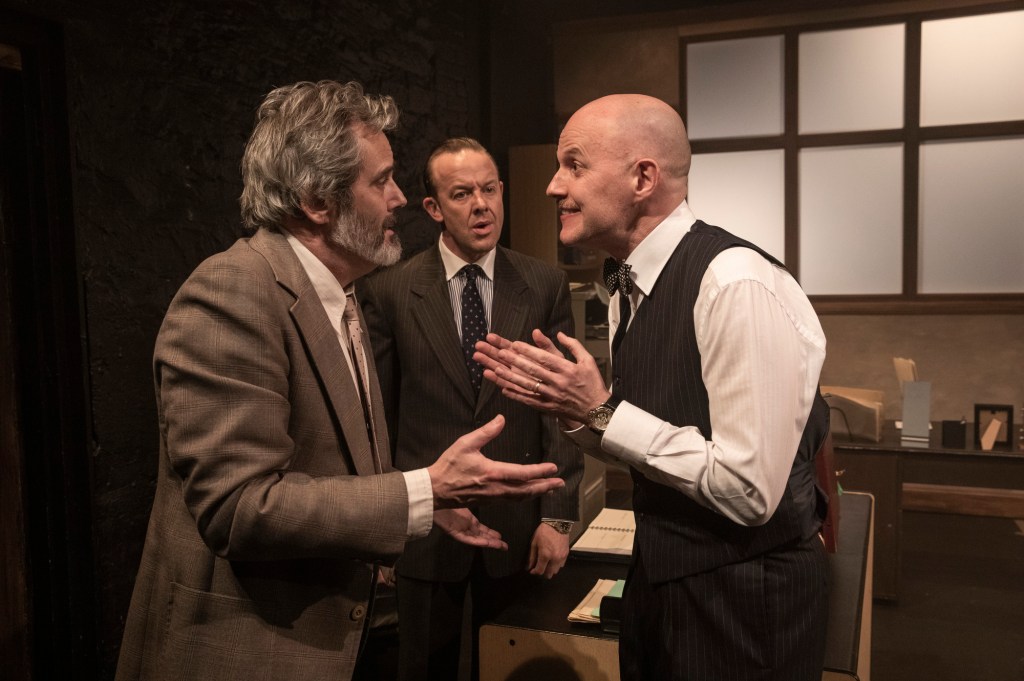 David Mamet’s play Glengarry Glen Ross has an impressive pedigree on both stage and screen. Premiering in London in 1983, then Chicago and Broadway the following year, it was met with audience and critical acclaim, winning numerous accolades including an Olivier Award, a Pulitzer Prize, and a New York Critics Award. The 1992 film version, featuring big-name stars including Al Pacino, Jack Lemmon, and Alec Baldwin, also received an Academy Award nomination.

The action centres on four real estate salesmen doing dodgy deals in Chicago. They’re in a winner-takes-all race on the sales leader board where the top dog gets a Cadillac and the losers lose their jobs. These are desperate men, and their desperation gives the play its power and intensity.

SA’s Flying Penguin Productions planned to stage Glengarry Glen Ross  last year to celebrate its 15th birthday, but life happened and it’s now made it to the stage 12 months on. And what a powerful piece of theatre it is, especially when staged in the intimacy of the Bakehouse Theatre where you can’t go to the loo once seated because that means walking across the set!

Read: How one venue’s closure can damage the arts ecology of a city

The actors are right there with you , so close that you feel their emotions and you just can’t look away for a moment. And it is an emotional roller-coaster as each character shares his pain and his passion.

Director David Mealor, founder and artistic director of Flying Penguin Productions, has stayed with the original script, with all its dialogue of the time. These characters can be racist and sexist but that was their world. There was a collective gasp from the audience on opening night at one of the play’s more offensive lines. Mealor should be lauded for staying on script and not pandering to the faint-hearted and politically correct.

And his actors do him proud in this tight seven-man ensemble. The play opens with unctuous office manager John Williamson, played by Bill Allert, and struggling salesman Shelly Levene, played by Rory Walker, in a seedy Chinese diner. Their heated conversation immediately sets the scene for what is to come.

The other salesmen are played by Nicholas Garsden as George, Christopher Pitman as Dave, and Mark Saturno as the irrepressible hot-shot Richard Roma. James Wardlaw and Chris Asimos round out the cast as a hapless client and tough-guy detective respectively. The costumes, sets, lighting,  sound, and well-executed American accents (thanks to great work by voice coach Patrick Klavins) all add to the authenticity of the piece.

Glengarry Glen Ross is an intense 90-minutes of dialogue-driven desperation. There are moments of humour amidst the greed and corruption but ultimately these are sad characters living little lives.  And, inevitably, this is all too close to reality for so many people. Yes, David Mamet wrote a brilliant script but David Mealor can be rightly proud of his cast and his vision. This is unquestionably one of the most satisfying productions I’ve seen in a long time.