Theatre Review: Come from Away

Sparks of goodwill shine in the trail of darkness.
Oliver Wakelin 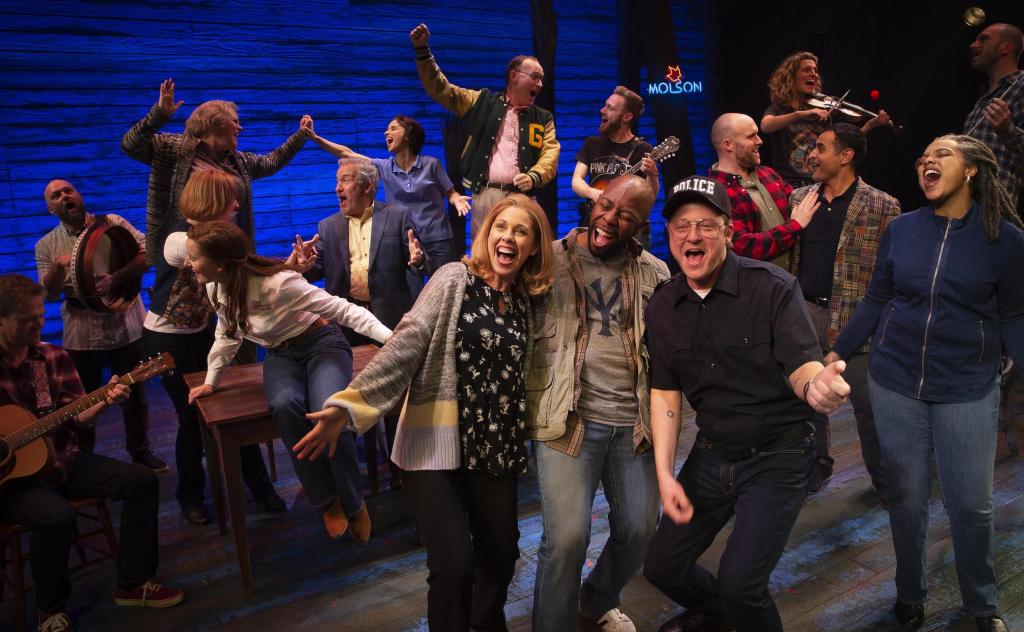 A rousing production of Come From Away. Photo supplied.

This toe-tapping show set in Newfoundland (cue the hypnotic pulse of the Bodhran drum) has been wildly popular from its earliest outings and eventually nominated for seven Tony Awards in 2017. It’s a feel-good musical featuring primarily Irish-inspired instruments and is fun for the whole family, despite the heaviness of the theme. (There’s fairly overt messaging about love, acceptance and healing). Come From Away will transport you through music and accent work, to the small Canadian town of Gander, where 38 US-bound planes were grounded during the September 11 terrorist attacks.

Once an important airport (when planes needed to refuel to cross the Atlantic), these days Gander is a sleepy town and all hands are needed on deck when thousands of travellers descend from the sky. For five days so much was required to accommodate these guests: bedding, food, clothes and much more. The townspeople rallied, coming to the rescue and in many instances, befriending their new visitors.

How do you write a musical about 9/11? Is it still too soon? Great tragedies do finally become the stuff of art (e.g. the film Titanic – which is referenced numerous times during this production). Perhaps the Twin Towers are still too bright a sun to stare directly into? This musical takes place in the  wake of that disaster, and recounts a series of low impact occurrences that take place adjacent to the terrible impacts of that day. Perhaps dramatising the peripheral events is still the best way forward for now.

Kolby Kindle as Bob (and others) brings an undeniable energy and verve to his parts, lighting up the stage with his comic timing and emotional depth, and putting the audience at ease with his obvious mastery of craft. Similarly, each time Zoe Gertz (Beverley) steps into the spotlight, her effervescence and technical mastery are on show, as well as her wonderful voice and command of pathos. Sharriese Hamilton (Hannah) was also particularly affecting, conveying a stoic quality that embodied the spirit of the production.

The set design was perhaps a touch underdeveloped, with the props – although used very effectively and imaginatively by the cast – being somewhat underwhelming. No doubt director Christopher Ashley made this choice to reference the haphazard way the town appropriated random items to provide for their new guests.

The music is the real stand out here, with the band delightfully performing on stage throughout. The (very mobile) musicians take a bow of their own, and step into the limelight to play one final rousing Irish-inspired Newfoundlander tune.

As an aside, why are orchestras so often hidden under the stage? I think it’s wonderful to see music being conjured right in front of you – you’ve paid for live music after all).

I would highly recommend this production if you are seeking great music, some hysterically funny moments (the person I saw the show with laughed into their red wine, showering us both in Shiraz) and a touch of catharsis and healing regarding the events of 9/11. Love and compassion can arise in the most trying circumstances.