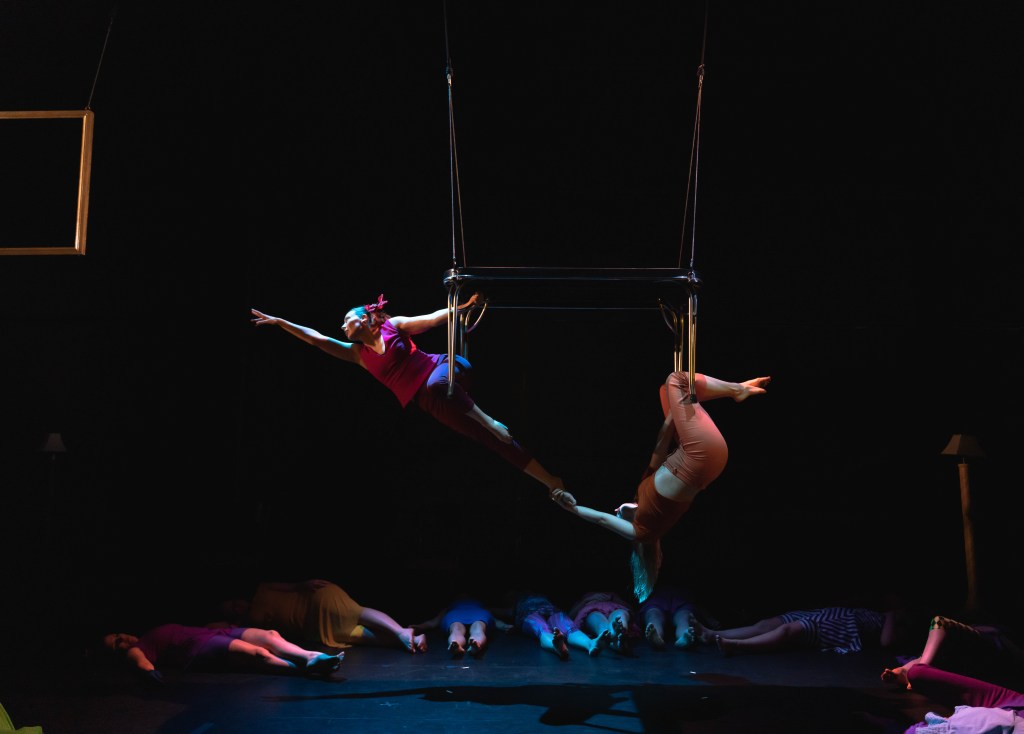 Circus in a Teacup was created by Queensland women’s art company Vulcana Circus in partnership with Brisbane Domestic Violence Service and Micah Projects, where ensemble members collaborated with domestic violence and gender abuse survivors to tell their true stories of recovery and triumph.

The hyped publicity promised a beautiful contemporary circus performance but judging by the bewildered faces from dumbstruck audience members’ point of view, it was the furthest thing from it. This production was a mismatched, clumsy and mangled attempt at New Age theatre.

To start the proceedings, an elderly Indigenous woman was led out to sit centre stage in order to sing a folk tune and accompany herself on an electric acoustic guitar. After the stagehand motioned to the sound technician to turn the volume down, the sombre mood was totally destroyed from the deafening crash as he plugged the lead into the guitar. Such technical issues should have been checked prior to the show’s performance and it left a jarring first impression.

A few minutes later, in anticipation of what was to come, lights dimmed as a cello played. The performance floor displayed a dining table and numerous chairs. Fourteen women entered the stage area, rattling glowing teacups and saucers and placed them in a row along the front. These teacups, one hazards a guess, were a symbol of domesticity, and denoted nervous tension, perhaps from the women’s point of view as they waited for their abusive partner to return home.

The music changed to an upbeat sound as lights flickered on and off, showing the actors in various freeze frame poses. As they moved around the floor, some balanced while others held chairs in the air, obviously triumphant.

A large timber prop, resembling a picture frame hung from the rafters where each woman either stepped or peered through it. Was it a window? Or did it depict a doorway?

The dining table became a suspended swing as two women sat or laid upon it while others in the group tipped it from side to side or pushed it back and forth. Perhaps this was a kitchen table, a site upon which arguments and violence happened. This would explain it being knocked and pushed around. The ensuing acrobatics, perhaps, were to show strength in overcoming an untenable situation.

Then came what presumably was a waiting room scenario. Music felt violent as percussive sounds echoed throughout the theatre. Doors creaked open, slammed shut and footsteps came and went. All fourteen women sat along the centre of the stage on a row of chairs with each one exiting at odd times. But what did their actions mean?

The only highlight of the night was the skilful aerial artistry of the two women who performed a fifteen minute adagio routine high above the crowd on the suspended swinging table.

The complete performance left a lot to be desired. A narrator to guide an audience through the night would have been desirable. It was extremely difficult for anyone to know what it was all about had they not read any blurb or review beforehand.