Theatre review: At What Cost?, Belvoir

A timeless tragedy that prompts questions about land and (Indigenous) identity.
Ned Hirst 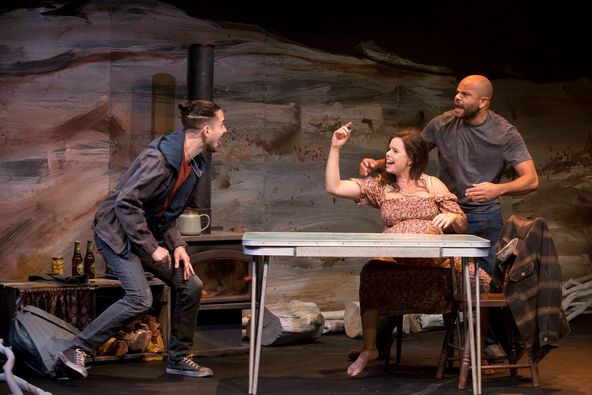 ‘The play sets itself the challenge of dealing with weighty themes – the historical after effects of genocide and the question of Aboriginal identity. To discuss it in terms of its themes, however, is to risk downplaying its merits as a piece of drama.’ Photo from Facebook.

Nathan Maynard’s astonishing new play At What Cost? is set in putalina in lutruwita (Tasmania). Boyd, played by Luke Carroll, is a highly respected member of the palawa community, which has reclaimed putalina. The play opens with the news that the remains of William Lanne, a palawa ancestor, is being returned from a British museum to be properly cremated by his descendants. Boyd has been chosen by the Land Council to be the one to light the fire which will return Lanne to his ancestors in the sky.

Meanwhile, the tenure of Boyd and his people is being challenged by another group who allege that they are descended from the Indigenous people of putalina. Boyd, who is from the north-east, is adamant that as a member of the only Indigenous people to survive genocide he and his fellow title-holders have inherited the whole of lutruwita. He is dismissive of these ‘claimers’, who he describes derisively as “check-a-boxes”. Despite the spectre of these challengers, Boyd, his wife Nala (Sandy Greenwood) and his friend Daniel (Ari Maza Long) live in relative domestic bliss until Gracie (Alex Malone) arrives. She claims that she is there to research her PhD on William Crowther, the surgeon and former Tasmanian Premier who decapitated William Lanne’s corpse and sent his head to London. Boyd, however, is suspicious about her real motives.

The play sets itself the challenge of dealing with weighty themes – the historical after-effects of genocide and the question of Aboriginal identity. To discuss it in terms of its themes, however, is to risk downplaying its merits as a piece of drama. It is billed as a ‘robust and modern tragedy’ but the descriptor ‘modern’ could easily be discarded. It is a tragedy of the timeless variety. After a deceptively tranquil opening, the tension progressively builds towards the play’s unforgettable denouement. The last hour in particular crackles with dramatic tension.

At What Cost? is anchored by Carroll’s powerful performance but the whole cast is excellent (a couple of minor opening night miscues aside) and director Isaac Drandic expertly balances the script’s mix of humour and drama. It is a powerful, moving piece of theatre which, once seen, is not easy to forget.

At What Cost? will be performed at Belvoir’s Upstairs Theatre until 20 February 2022