An exhibition exploring the collusion of books and art and the plight of (endangered) printed media.
Karl Sagrabb 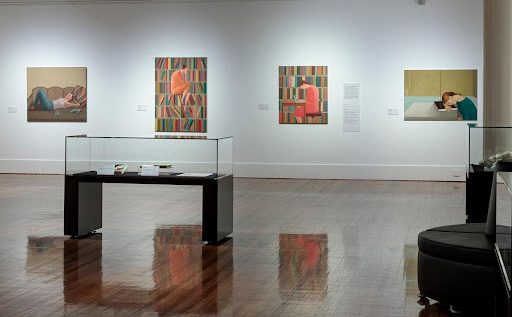 The exhibition delves into questions of identity: the ways in which books can be instrumental in constructing one’s identity and the ways in which literature may provide a solace and a refuge. It also explores the encroachment of digital technology into realms previously held by printed media, and the threat this poses to the novel, the book, and the humble library.

First encountered is Penelope Davis’ series, Fiction – Non-Fiction (2007-08), a suite of photographic works produced without a camera. They’ve been created by casting deaccessioned library books in resin and the use of a photogram and digital technology. They are glowing; luminous.

This series compares the nature of books and photography, both being ‘visual mediums created by mechanical print processes’ and both serving as ‘repositories’ of personal and collective memory. Through the use of such atypical photographic practice, Davis plays with these media of memory, subverting notion of the photograph as an indexical reference and positioning it more in line with the artifice of a novel.

In a similiar ethos, Nicholas Jones’ Altered Book (2019) series creates sculptural objects from old books, highlighting their materiality, physicality, and tactile nature of the medium. These works place into conflict ideas of the tactile versus the digital, and raises the spectre of the impact upon the book industry of digital technology. This is a common theme throughout the exhibition – the death of the novel and the threat posed to books by the digital.

By carving sculptural forms out of these books, Jones also reveals patterns of text that artfully contribute to the form of the sculpture. The text is revealed as the cover and pages are carved away and selective snippets or glimpses of text emerge, creating a sculpture that is multi-dimensional in all senses, and not just spatially or temporally but artistically, connecting to a history of words and literature throughout time.

Read: Journey of the book through time and space

The strength of the exhibition is in exploring the ways that books, literature, and writing have opened new worlds and avenues to those typically denied them.

Deborah Walker’s works in the exhibition provide clues into the inner life of women depicted in various positions of reading, yet answers are elusive. The works evoke Virginia Woolf and her essay ‘A Room of One’s Own.’ The pictures are dreamlike and allude to a truth visible beyond simple language.

Like Walker, Prudence Flint’s series A Fine Romance depicts women in psychologically heightened settings in acts of reading against a bright colour field background that reflects the spines of books on a shelf. Flint’s work explores intimate domestic spaces – socially coded feminine spaces – and the sensibilities associated with such realms. These works portray reading and writing as a subversive act in a patriarchal society.

Reading and writing and creating provide a space, a world, that is purely one’s own for the creator, and a space that is safe, evoking the solitude and protection of a library. Books, we can see, and the places they are held, are not merely artistic or entertaining creations – they serve other functions. Indeed, in specific terms, we may think about the services that public libraries offer – free service for all to read, write, research, or simply take refuge from the outside world.

With the increasing number of libraries closing, these services are at risk, and we must think about the people who benefit most from such services, in particular those without homes and shelter, or ready access to the internet. This threat is explored in Victoria Reichelt’s works, for instance Perch (2012).

Reichelt’s photo-realistic paintings explore the threat digital technology poses to books, print material, and the libraries and archives that house them. She depicts animals exploring disused library spaces, perched on shelves, depicting the uncertain future of the book and the diminished role of libraries in the digital world.

Exploring the threat to books further, Tai Snaith’s works transforms discard books into poetic artworks. Her works in the exhibition explore the relationship between books and identity and the formative role books may play. Snaith uses hardcover books as the starting point for a series of collage works due to the inherent ‘energy’ held within the book, generated by the written content, and pays homage to female artists and writers, and cinematic history.

I couldn’t help but wonder what new story this exhibition was adding, or what the tale this exhibition was telling. Many of the works had appeared in the Geelong Gallery’s ‘Ex-Libris: The Book in Contemporary Art’ exhibition. As a bookseller, I found fault with some of the arguments forwarded in this exhibition. For instance, that digital media is an existential threat to physical books and novels.

Instead, I agree with Sally Rooney: the novel is fine, and if it is to be replaced then I am excited to see what form it takes. Instead of panicking over the death of the novel and the replacement of physical books by digital media, the real threat to the book industry is not ‘the digital’ but the undercutting of the industry by such players as Amazon and discount department stores.

The threat is not in digital media but in digital sales. If we are to lament anything about the book industry, it is in the way that Amazon and discount department stores collar and undercut the market, suffocating trade for independent bookstores.

It verges on facile to criticise digital media as spelling the end of books, when it is the voracious vicissitudes of capitalism that is writing this death sentence. Criticising digital media in this way may be seen as a sort of abrogation of duty to address the real problem and rings of the kind of moral panic that typically accompanies all new technological developments.

Despite my quibbles with some of the arguments presented by the exhibition, it is a highly enjoyable exploration of the way books inform our lives – our identities, our culture, our art – and it is fascinating to explore the ways in which books have been formative for such an excellent collection of Australian artists.

Telling Tales will be on display until 6 February 2022.