Theatre review: A Not So Traditional Story 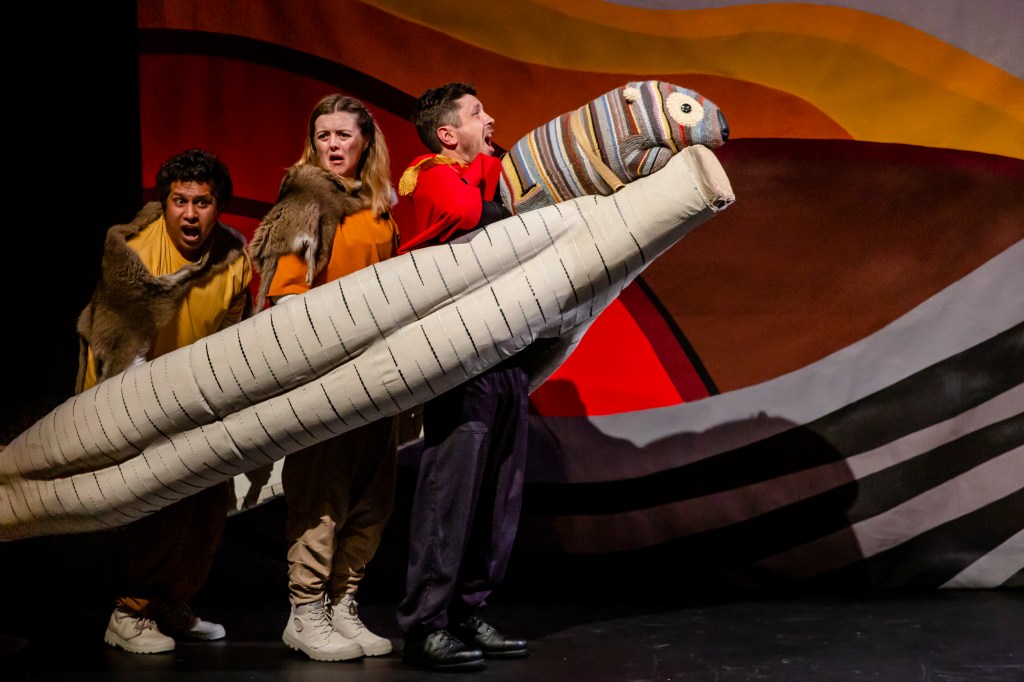 Everyone loves a surprise, and A Not So Traditional Story contains a big and wonderful one. More of that in a moment…

The writer is Nathan Maynard, a trawlwoolway palawa/pakana playwright based in lutruwta/Tasmania, whose first play, The Season, premiered at the Sydney Opera House and toured nationally, gathering awards along the way. No one-hit wonder, he has commissions from several leading theatre companies.

This show, Maynard’s first for a young audience, tells two stories of the two human settlings of lutruwita. The larger story of the title relays the adventures of brave Wurangkili (Denni Proctor) and timid Timita (Jordy Gregg). This pair, in the company of an enigmatic ‘alien’ (Maynard) and his wombat companion, go in search of the eldest elder of the island. Along the way they meet some friends: Kangaroo, Lizard and Eagle, all played by Noah Casey. Each tells of recent trouble or injury. What is causing all this trouble in lutruwita?

White invasion, as embodied in the cagey alien, with his red-and-gold cloak, superior attitude and mysterious object – later revealed to be a gun – is thus given an entertaining but still sharply pointed telling.

The writing is good, and keeps the young audience engaged. The two lead characters are appealing: youthful enough to be relatable, street-wise enough to be cool. They enjoy real character development, and Maynard’s writing skilfully allows them to exist simultaneously in both traditional and contemporary worlds. The animal characters are warm, quirky and detailed. There are many laugh-out-loud moments, though some jokes, aimed at the adult audience, fall flat. As a catalyst for discussion of Tasmania’s dark and bloody history, it is an effective tool, as child-friendly and engaging as one could hope to find.

Read: Theatre review: The One Who Planted Trees

The four actors give cheerful and energetic performances. They connect with their young audience, and director Sam Routledge keeps the story-telling ball bouncing. While Noah Casey’s voice is rich and strong in his multiple roles, the other actors are let down by inadequate vocal technique; their voices lack power and expressiveness.

The production design is eye-catching. The larger framing is bold, colourful and clever, the miniature shadow puppetry is elegantly designed and presented, with little tricks of revelation and transformation. The exquisite masks of the animal characters are a wonder.

Oh! And that surprise I mentioned? Nathan Maynard, successful playwright, is revealed to be a versatile comic actor. His range is broad: daggy, witty, sophisticated, stupid, sly, slapstick, innocent, knowing – playing comedy is his gift, and he knows how to use it.

A Not So Traditional Story was performed from 7-10 October 2021.