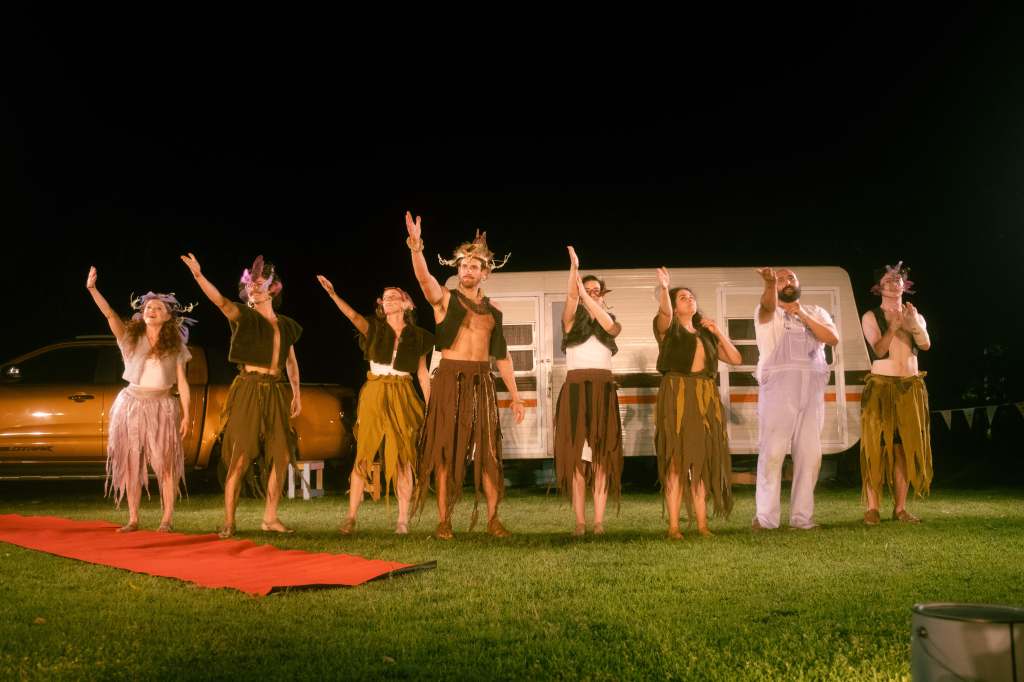 ‘For those whose guilty or not-so-guilty pleasure is a night of wacky fun underneath the night sky, this production is for you.’ Photo supplied.

Throughout the course of one’s life, the question of whether to obey or elude authority appears in many forms. In A Midsummer Night’s Dream, William Shakespeare focused on the myriad ways love rules over our lives. We witness a father’s love for his daughter and his command that she marry a man of his choosing. Hermia defies him because her heart longs for another, a decision which, according to Athenian law, can result only in death or a life of celibacy. We witness lovers and the broken-hearted alike struggling against their obligations.

Hermia and Lysander elope. Demetrius follows, hopelessly in love with Hermia, and flanked by a lovesick Helena who craves for his heart. Enter a dysfunctional world of cunning and meddling fairies, and a compelling tale about the difficulty of overcoming authority and following one’s heart emerges. Difficult because, more often than not, the things most capable of exercising authority over our lives are the things we love most. A Midsummer Night’s Dream dwells in this territory, placing comic absurdities of conflicted and troubled hearts centre-stage. It is a joyful text, and is one of the two discernible strengths of the Fremantle Theatre Company’s production of this beloved play.

On opening night at Perth’s beautiful Kings Park, well-dressed theatregoers of all ages sat on chairs, beanbags, and picnic blankets and enjoyed a night out with loved ones. As the audience awaited a ‘classy’ and fun summer affair beneath the night sky, a general air of calm filled the outdoor amphitheatre. The show soon began and the audience was escorted into the familiar world of Shakespeare by a talented cast whose rousing performances proved to be the saving grace of the show.

Director Renato Fabretti appears to have taken several liberties in their attempts to ‘modernise’ the play and increase its appeal to a wider audience. From characters taking selfies onstage to posting on Instagram, a rendition of Rick Astley’s ‘Never Gonna Give You Up’, to Flo Rida’s ‘Apple Bottom Jeans’, the show’s attempts at self-referential humour felt less Shakespearean and more Family Guy in-jokes among university freshers. Several moments bordered on tacky.

The first was the Fairy King, Oberon’s drunken mutterings after a disappointing night of scheming. The second relates to the play within the play, Pyramus and Thisbe, and the prolonged death-by-stabbing of Bottom’s character, Pyramus, during the Mechanicals’ performance at the Athenian court. The third relates to the cartoonish whack-a-mole jokes as Puck lifted the spell the fairies had put on Lysander. Amid such garish directorial choices, the cast’s poor attempts at directly addressing the audience felt forced and uninspired. Each of these instances crossed the line from slapstick to tired.

For a show whose source material concerns the absurdity of love, its unyielding authority over our lives and our feeble efforts to subvert it, the rich and multi-layered meanings of this Shakespeare classic were lost amid such poor attempts at giving it a ‘fresh’ spin. As the audience watched the Athenian court’s incapacity to recognise themselves in the ‘tragical mirth’ of the tale of Pyramus and Thisbe, one could not help but lament the stripping of Shakespeare’s play of its complexity.

Nevertheless, the show provided a good dose of fun and whimsy, albeit at the cost of doing Shakespeare’s work justice. For those whose guilty or not-so-guilty pleasure is a night of wacky fun underneath the night sky, this production is for you. If you would rather your Shakespearean exploits came with a bit more sophistication, then this production is not for you. However, for all whose love of a charming cast is enough to overlook a work’s flaws, there is much to adore in this production.

A Midsummer Night’s Dream will be performed until 29 January 2022.