A play about family conflict in the face of terminal illness highlights the importance of having the right to die with dignity.
Arjun Rajkhowa 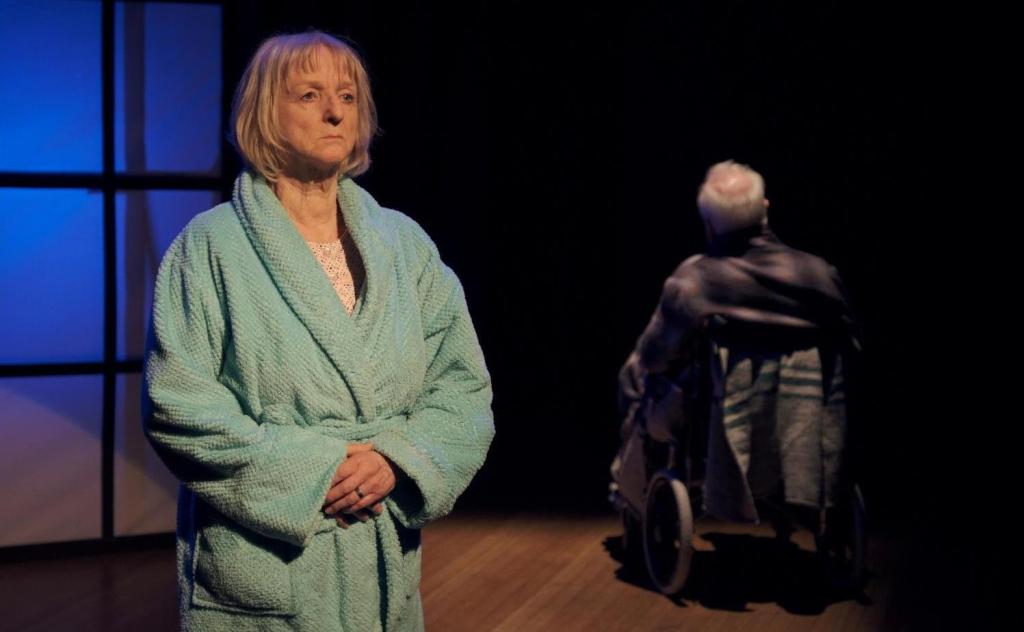 The Window Outside by Belinda Lopez is a moving play about terminal illness and enduring love for your partner.

A family confronting terminal illness negotiates the challenges of coming to terms with caring responsibilities and choices at the end of life. Frank (Ian Rooney) has become paralysed and lost his ability to speak following a stroke; he is entirely dependent on his wife Evelyn (Carrie Moczynski) and daughter Sharon (Julie-Anna Evans). Evelyn has dementia, and, in her imagination, Frank is still the garrulous and effusive man she always knew. Her conversations with him sustain her. Their second daughter, Miranda (Antonia Mochan), has returned home from New York for a short visit; she is perplexed and confounded by her parents’ ongoing decline. Her relationship with her parents is affectionate but distant; and, as someone who lives in a different country (and, consequently, does not share responsibility for their caring needs), she does not fully appreciate the gravity of the situation. Sharon, as the primary care-giver, is now emotionally and physically exhausted, and expects Miranda to support her decision to take their parents to a nursing home. Meanwhile, Evelyn is safely ensconced in her imagined world with Frank, and cannot bear to contemplate the prospect of having to leave their home.

Rooney puts in a sterling performance as Frank, adeptly alternating between an immobilised state and fully functional state. Moczynski’s performance as Evelyn is endearing. Evans and Mochan dramatise the tension between disconnected siblings very well. The acting at the start of the play is a little unpolished but the actors definitely grow more comfortable in their roles as the play progresses and the tension heightens.

This is a very relatable and relevant Australian play that deserves to be watched widely. The dialogue is intelligent, insightful, moving and provocative. The play has many amusing as well as sorrowful moments. Overall, it encapsulates the predicament of the terminally ill and their family members remarkably well. It captures the fear, sorrow and stress people may experience when their health has irreversibly deteriorated, and they have irretrievably lost their autonomy and capacity for independent living. It also challenges conventional notions about the terminal stages of life. Sharon asks Miranda, ‘What do you see when you look at him [Frank]?’ Sharon sorrowfully admits that all she sees now is an ‘empty shell’, a body without a soul. Evelyn challenges both her daughters to overcome their defeatist (and unconsciously dehumanising) presumptions about their father. Even though her connection to Frank is sustained through visions, projections and imagined conversations between them, Evelyn’s unwavering faith in her husband and sensitivity to his needs compel us to challenge our prejudices: ‘He’s got plenty to say. But everyone has stopped listening.’

The play evocatively depicts the sorrow and stress people may experience while caring for loved ones who are suffering, as well as the acrimony and pain involved in having to negotiate caring responsibilities in difficult circumstances. The tense and acrimonious relationship that Sharon and Miranda share, and their anger and incomprehension, reflect society’s conflicted approach to terminal illness and death. Fear and anxiety mar their relationship with their parents. In contrast, we have Evelyn and Frank’s placid acceptance and serene surrender in the penultimate scene: the letter that they leave behind, to explain their decision to die, is poignant and compassionate. There is a redemptive hope in Evelyn’s unbroken bond with Frank and her undiminished commitment to preserving the joyfulness of the fundamental bond that has defined their lives. This tension between fear and acceptance characterises most of our conceptions about end-of-life experiences. This play should be performed more widely in Australia because, amidst growing public awareness of the importance of end-of-life choices, it can spur better conversations about what it means to die well and with dignity.