ENSEMBLE THEATRE: A wonderful telling of the story of a small man in a small part in a medium size production of a very big play.
Lynne Lancaster
[This is archived content and may not display in the originally intended format.] 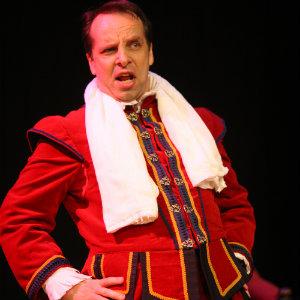 Welcome to the Huffington Players touring production of Hamlet. Our hero, Nathan Turner (Jamie Oxenbould) is a minor cast member; a lowly courtier, spear carrier, Ophelia’s attendant and one of the players, with few lines. While he shifts chairs, guards exits and dutifully mutters in the background we are privy to his wandering, sarcastic thoughts on the glaring faults and inadequacies of his co-stars and his sadly lacklustre career. Turner is a star in the making, an excellent actor who would be fantastic in the lead role. So why is he relegated to being a spear carrier while the rest of the cast perform? Why doesn’t the beauteous Veronica van Clamp (Jessica Sullivan – an angelic vision in white), who plays Ophelia, notice him or know his name? And how can he impress the casting agent in the audience?

This witty, insightful production is perfect for anyone who’s ever played minor roles. It features sarcastic in-jokes which will delight anyone in the theatre industry, and simultaneously educates the general public about the boredom of long runs (this is the 118th performance of the Huffington’s Hamlet) and the challenges of staying awake on stage.

As Turner, Oxenbould – resplendent in elegant red and black doublet and hose – is fabulous, and has a whale of a time. He has great comic timing, and performs well in some of the play’s more delightful sequences (e.g. the movie sequence where he imagines himself as the hero), while giving us a running commentary on the play’s progression and certain on-stage embarrassments (e.g. anachronisms like his watch, or his mobile ringing mid performance).

There is also much fun to be had when Turner’s character becomes involved with Rosencrantz and Guildenstern, and a great scene of ‘WWSD’ (what would Shakespeare do?) when Turner imagines himself as the Bard, writing a naughty sonnet. The production’s theatrical tour de force, however, is Oxenbould’s magnificent and energetic enactment of the final scene of Hamlet (duel and all!) in which he plays all the parts with assorted different voices. Hilarious, much fun and excellently acted. Bravo!

A year and a reconstructed knee after the original season of this play was scheduled, Oxenbould defies the convention that ‘there are no small parts , only small actors’. This is a wonderful telling of ‘the story of a small man in a small part in a medium size production of a very big play’.

The Spear Carrier
By Jamie Oxenbould