The Shadow Whose Prey the Hunter Becomes, Carriageworks (NSW)

A sparse production that turns the mirror on the audience.
Virginia Balfour 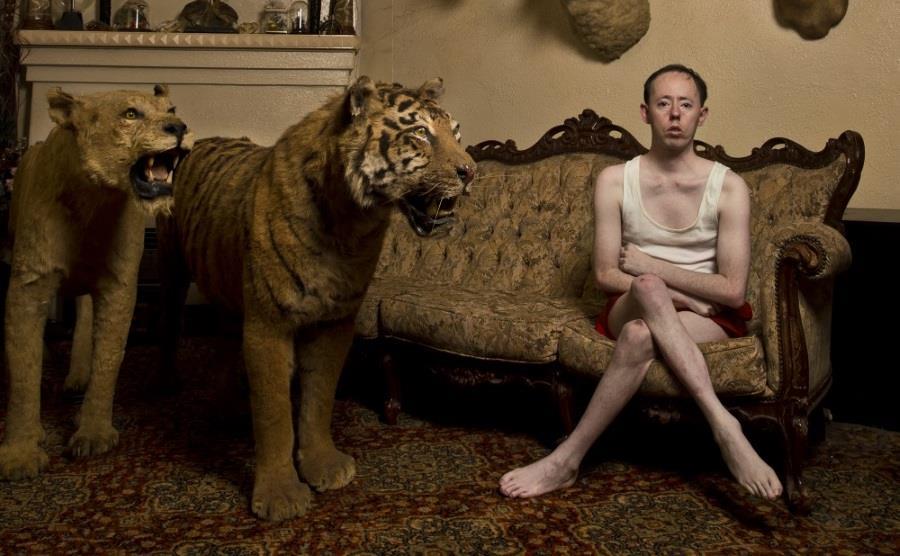 Back to Back Theatre, The Shadow Whose Prey the Hunter Becomes. Image: Jeff Busby, 2018.

Back to Back Theatre have opted for a daringly sparse production for the world premiere of their latest show The Shadow Whose Prey the Hunter Becomes.

The cavernous performance space of Sydney’s Carriageworks invites spectacle. This production, however, chooses to present an intimate show. The five cast members address the audience from plastic seats which are wheeled on by the performers and placed in a line facing the audience. A thin strip of yellow masking tape is laid on the floor to delineate the line between the actors and audience.

The conceit is that a meeting has been called (we are not sure why) in a community hall in Geelong and we, the audience, are facing a panel who are both lecturing and interviewing us about disability. The company describe the meeting as being one ‘you would hope to happen in a certain kind of democracy’.

The panel members are all people with disability. One has an acquired brain injury, another autism, the others have some kind of intellectual disability. The script follows their deft exchanges, squabbles, and pulpit-style speeches on what it is like to live with disability.

The play is described as being about individual and collective responsibility. The narrative meanders through an existentialist exploration of themes and sub themes as the Beckett-like meeting (what is the meeting for? why are we here?) creates a recurring motif of how to make meaning in an increasingly complex world. It poses the question of what able-bodied, disabled, intellectually disabled or neuro-diverse definitions mean in an increasing disembodied online world. At times, the cast talk directly to the audience, questioning their position. ‘They are still not getting it,’ a cast member points out at one point.

Throughout the production, Orwellian sur-titles are punched out on a screen which hovers above the stage. To begin with, it seems that the screen’s purpose is to clarify what the actors are saying. As the play develops, however, the cast begin to interact with the screen, which replies in a Siri-esque way. Gradually, we begin to understand that the play is making a point about how machines are taking over what humans do, and that we, the audience, will ultimately be disabled ourselves by new technology. Eventually, the text surmises, we will all be inferior to the machine. It’s a clever argument to make, bringing the plot full circle from drawing attention to the plight and prejudice faced by disabled members of our community, through to turning the mirror on us to ask how we might feel if we were in the same situation.

Back to Back are a multi-award winning theatre company who have an international reputation for exploring disability politics through innovative and imaginative theatre, and they rightly position themselves as one Australia’s must-see companies. This production was created intermittently over many months through conversations and improvisations with the cast members, and it adds to the company’s repertory an important questioning of the world view of disability.

The theatrical inventiveness that has characterised so much of the company’s previous work seems lacking in this production, however. The staging creates a strange intimacy out of the vast space, yet the lack of action makes the show quite static and dialogue-driven. The result is a production which feels almost deliberately subdued, perhaps even sombre.

It should be noted that the show contains references to physical and sexual abuse, the oppression of animals and humans as well as neuro-typical shaming and coarse language.